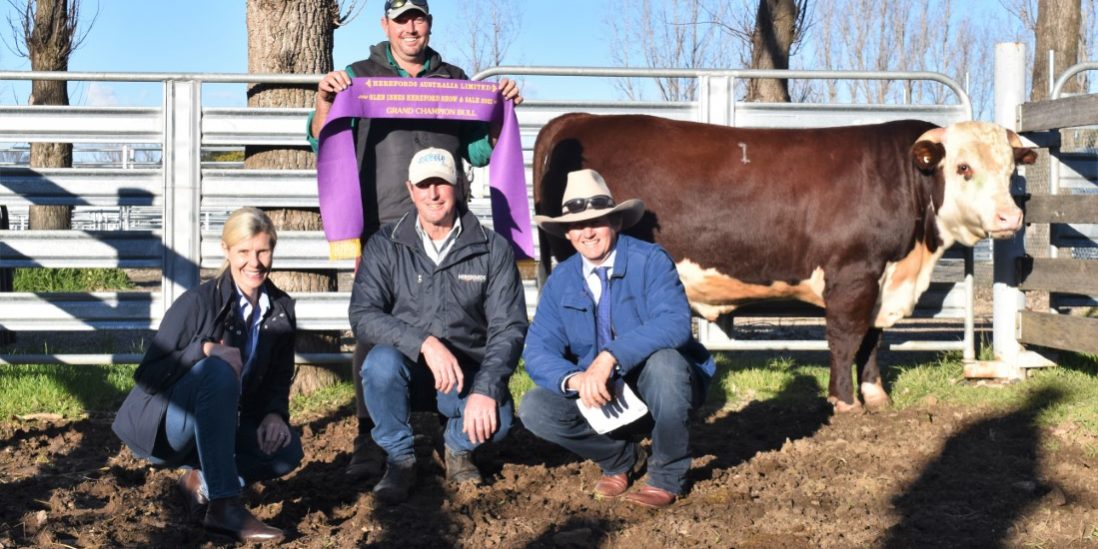 The team of seven bulls entered by Phil and Brad Thomas of Kylandee Herefords have swept through the competition at the 76th annual Glen Innes Hereford Bull Show, taking home the prize for grand champion bull, champion pen of three and champion truckload of six bulls.

Perhaps most impressive is that this is the fifth year in a row Kylandee have been awarded the grand champion sash, this year with 22-month-old Kylandee Quirindi Q015.

As one of the youngest bulls in the catalogue, Quirind Q015 weighed in at 935 kilograms with a raw EMA scan of 138 square centimetres, rib, and rump fat measurements of 14 and 21 millimetres respectively and a scrotal circumference of 46 centimetres.

Bull classes were judged by Ben Monie of Thornleigh Herefords who described Quirindi Q015 as the “most complete” bull in the junior class before going on to sash the young sire as grand champion later in the afternoon.

“I just love the style of this bull, he’s structurally sound and he’s got a beautiful muscle pattern.

“He stands up nicely and walks out well and shows himself in a nice, balanced fashion,” Mr Monie said.

Brad Thomas of Kylandee Herefords said they were “absolutely stoked” to have taken out the title of grand champion for the fifth year in a row.

Murrumbo is the sire of five of the seven Kylandee bulls entered at Glen Innes this year, and according to Mr Thomas the home-bred sire was only joined to six females, producing the five Glen Innes bulls and a “pretty handy female.”

“It’s extremely pleasing to see your own genetics used, even in our tight herd and coming up with results like the bulls we have here,” Mr Thomas said.

Mr Monie described the champion pen as “bulls that can really advance the Hereford cause.”

“They’re structurally sound and have a lot of meat where the high value meat is,” Mr Monie said.

Mr Monie was particularly impressed with the soundness and the evenness of the runner up pen of three.

Mr Monie regarded the Kylandee team of six as a “consistent type” with a higher growth pattern and great muscle content.

Mr Monie commended the solid muscle content and the “good commercial attributes” of the Swanvale team.

First place in the intermediate individual class was awarded to Kylandee Quamby Q007, who was part of both the successful pen of three and truckload of six Kylandee bulls.

25-month-old Kylandee Quamby Q007 tipped the scales at 1045 kilograms with a raw EMA of 142 square centimetres and rib and rump fats of 15 and 24 millimetres.

Quamby Q007 impressed the judge with his strong carcase attributes and industry relevance.

“His carcase runs right through; he has beautiful hip to pin.

“He is a really good example of a bull that can do good in the industry and in this breed,” Mr Monie said.

Second place in the intermediate class was awarded to Jindalee Quaker Q050, an 895-kilogram son of Burrawang Lexicon, exhibited by Angus and Eunice Vivers of Jindalee Herefords.

Mr Monie described Quaker Q050 as having “a lovely head and eye and great width right through.”

Second place in the junior class behind the grand champion bull was Kylandee Quinalow Q014 who weighed in at 975 kilograms with an EMA of 134 square centimetres.

The 29-month-old sire weighed in at 1010 kilograms and is by Canadian sire Eagle-Ridge Blaster 4J.

Quad Blast Q001 scanned with an EMA of 137 square centimetres, rib and rump fats of 15 and 21 millimetres and a scrotal circumference of 42 centimetres.

Mr Monie was impressed with Quad Blast’s structure and movement and described him as “a bull that brings a lot to the industry.”

“He walks well, he’s long and he has good sound feet and legs,” Mr Monie said.

Second place in the senior class went to 1100-kilogram Kylandee Quaama Q006, rounding out a very successful show afternoon for the Kylandee team.

Mr Thomas was exceptionally happy with the Kylandee results, attributing their success to the quality of their 2021 bull team.

“We’re extremely pleased with the type of cattle we’ve got here this year; we believe they’re the best we’ve ever presented,” Mr Thomas said.

The September 2018 drop bull weighed in at 1020 kilograms and scanned with an EMA of 142 square centimetres.

Second place in the three-year-old class was awarded to Neridah Pure Direction P001, who had been named senior champion interbreed bull at the Guyra Hereford feature show in February 2021. 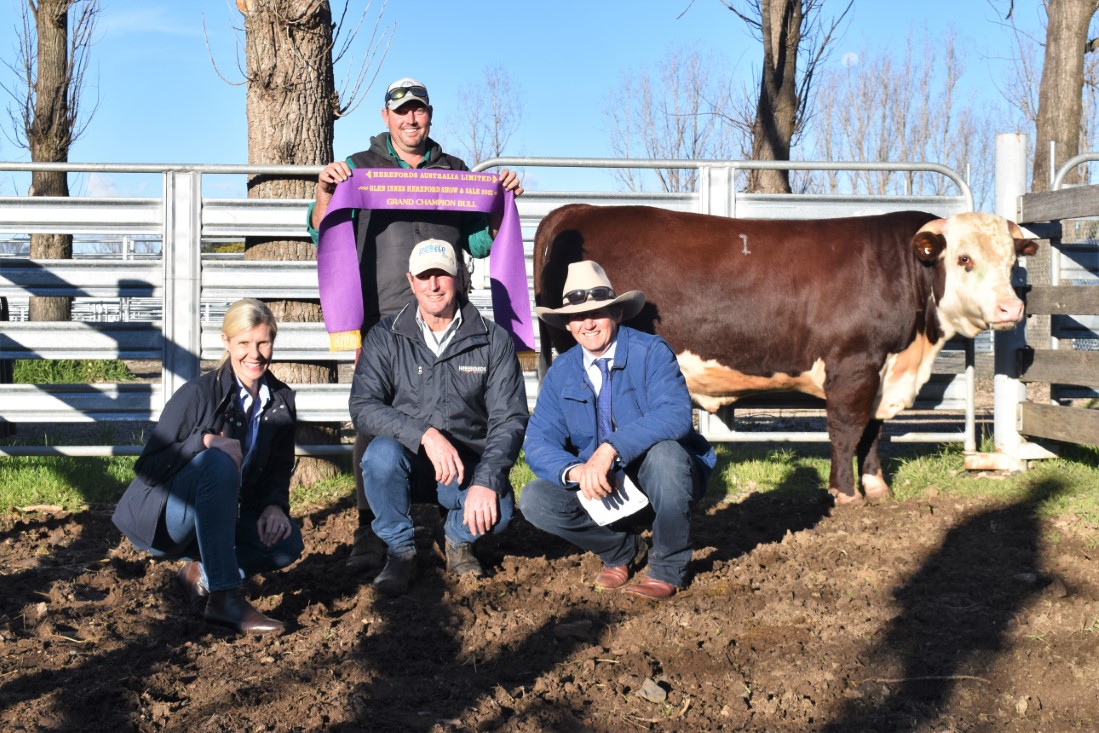 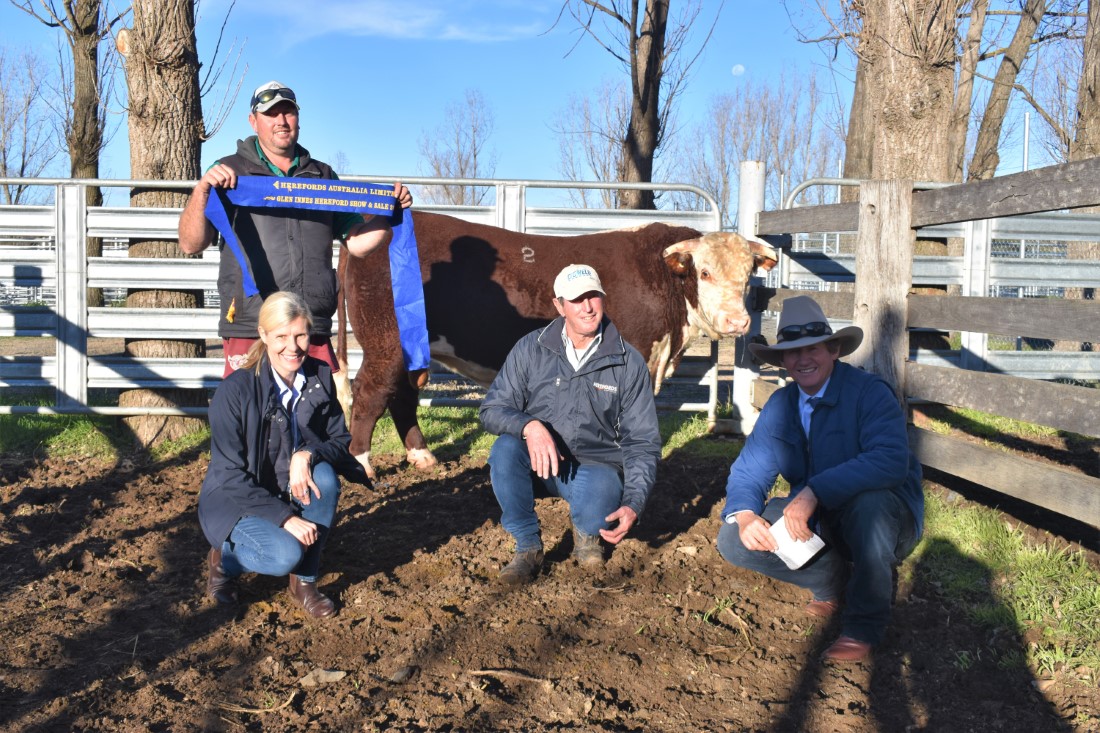 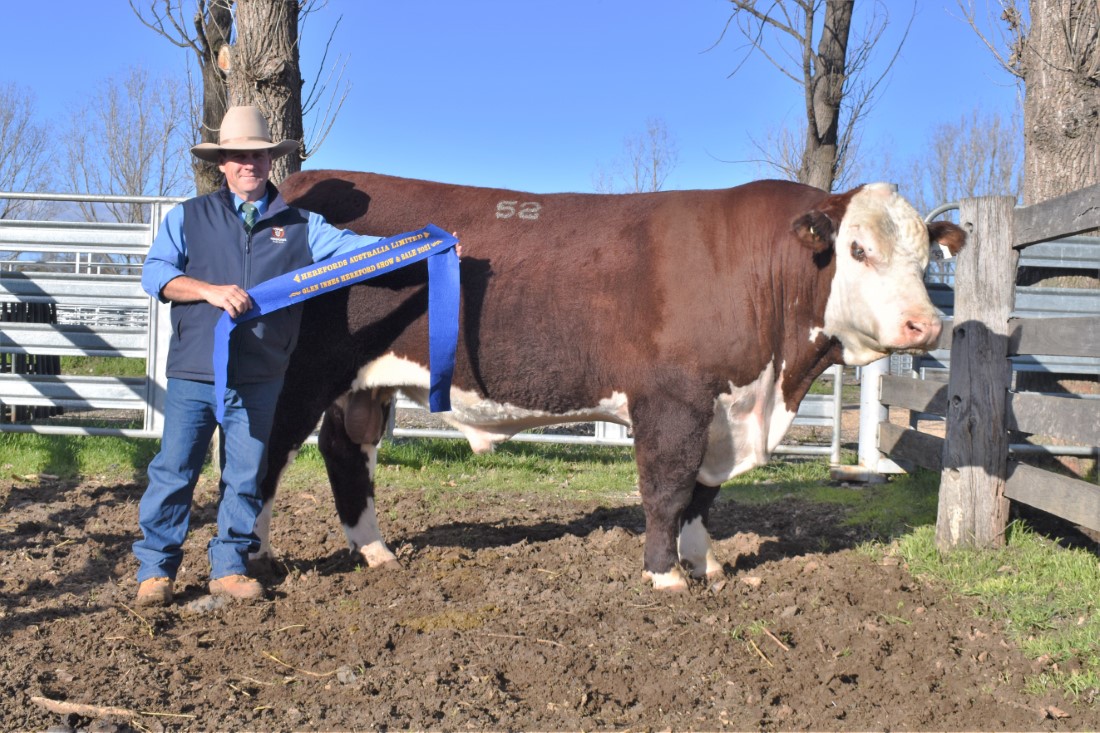 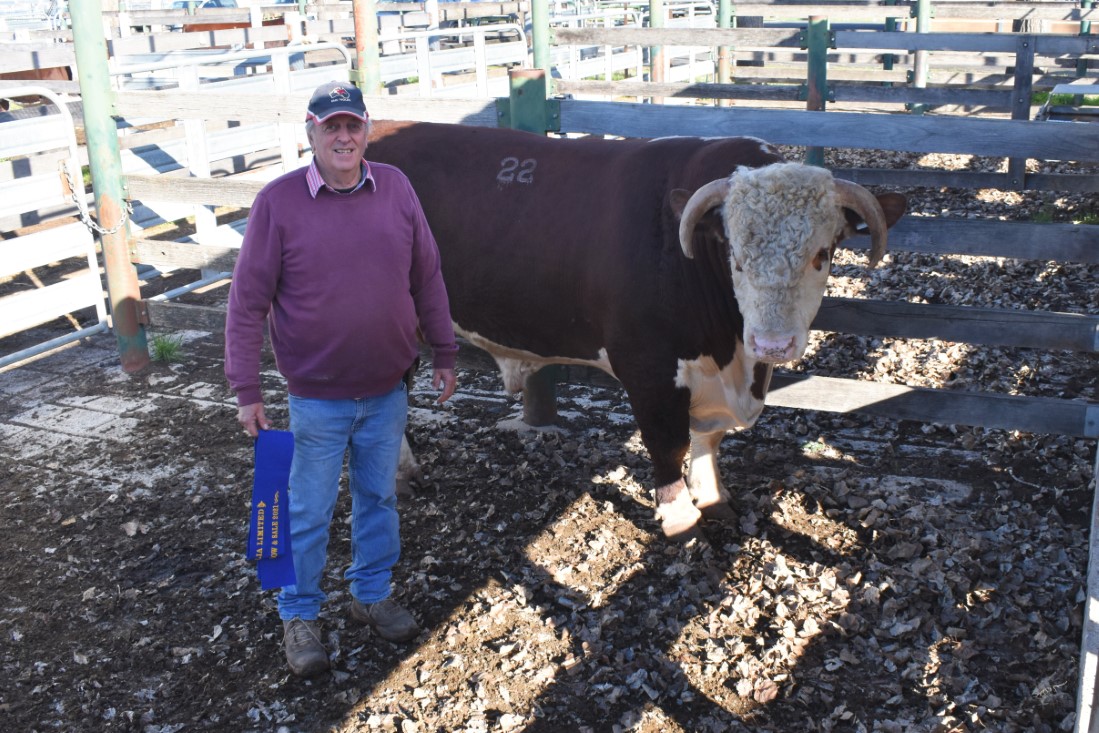 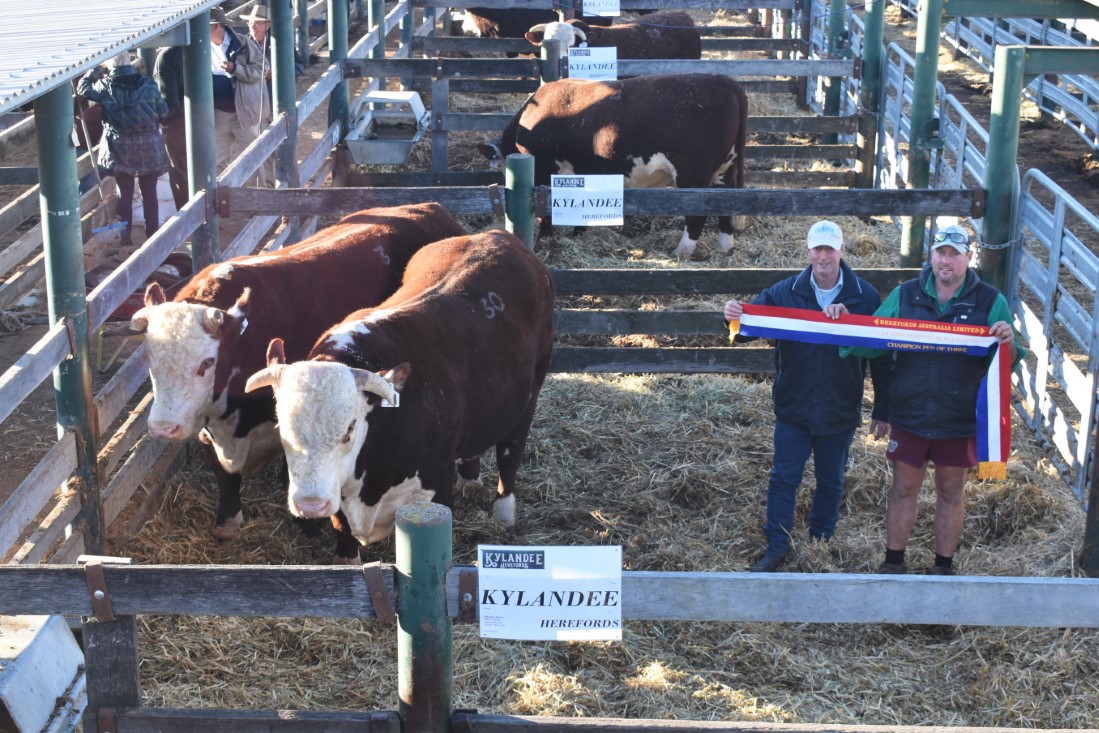 Phil and Brad Thomas with two of the winning pen of three bulls: Kylandee Quartz Q008 and Kylande Queerah Q011. (The third bull in the team Kylandee Quamby Q007 is pictured as intermediate winner.) 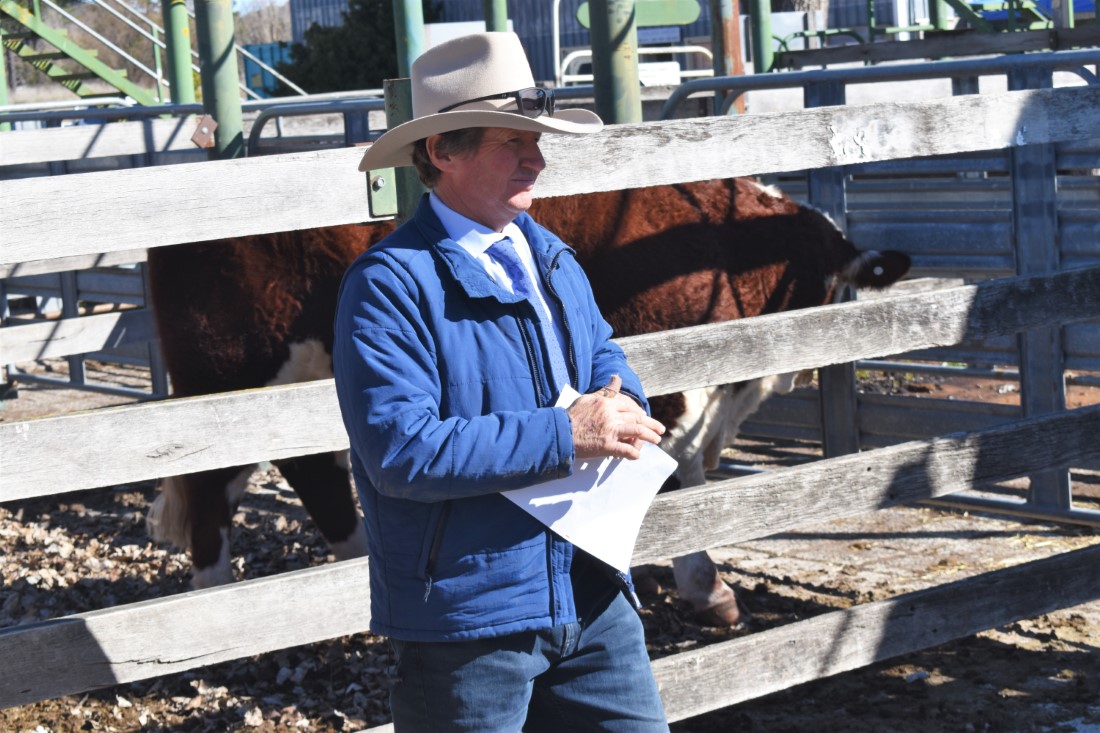 Ben Monie of Thornleigh Herefords took up the judging reins for the 2021 event.