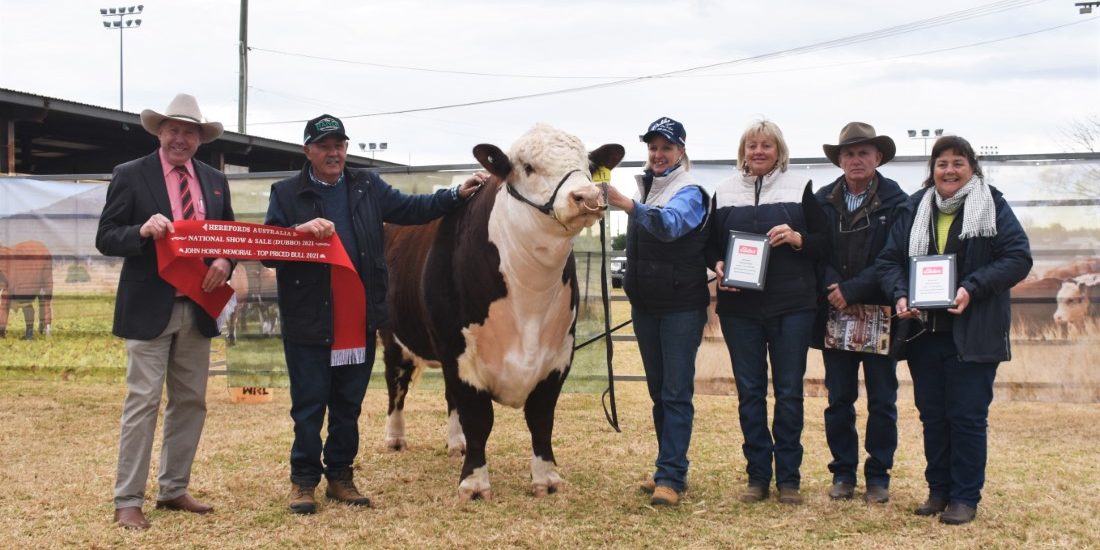 The Herefords Australia National Show and Sale (Dubbo) celebrated its 60th anniversary in style, with a new record average of $11,042 and a one-hundred percent clearance of bulls and females.

Dubbo committee chairman Andrew Rayner described the full clearance as “the most pleasing part” of the day.

Nutrien Divisional Livestock and Stud Stock Manager John Settree described the sale as a “really solid result” and attributed buying strength to a range of areas.

“AuctionsPlus was very strong, we had bulls sell to South Australia, some really strong competition into Victoria and again through NSW,” Mr Settree said.

Offered by Greg and Del Rees of The Ranch Poll Herefords, Qualifier Q033 was sired by The Ranch Tipperary M005 and weighed in at 890 kilograms.

Qualifier Q033 had the largest scrotal measurement of the catalogue with a scrotal circumference of 45 centimetres, and the equal third largest EMA scan of 128 square centimetres.

According to Tycolah stud principal Steve Crowley, Qualifier Q033 caught their eye with his style and type.

Greg and Del Rees were delighted with the sale result and were very happy Qualifier Q033 sold to a stud home with similar breeding objectives to their own.

“He is a good bull and he’s gone to a wonderful home, we’re really pleased,” Mr Rees said.

According to Mr Crowley Qualifier Q033 will be put straight to work in the stud when he arrives back at Tycolah.

The second highest price of the sale was $20,000 which was paid for rising three-year-old female Grathlyn Chance P061, who was sold as PTIC to Bowen Magistrate with heifer calf Grathlyn Chance R007 at foot.

Tim Hayes of Tarcombe Herefords was unable to attend the sale in person but said he had seen photos and videos of Chance P061 and described her as “very attractive and a good type.”

Mr Hayes was particularly impressed by Chance P061’s Breedplan data; she is a high indexing female with a moderate birthweight and high growth with 200, 400 and 600-day weights in the top five percent of the breed.

The nine female lots offered at the sale sold for an average of $7111.

Armada Represent R070 had been sashed grand champion bull in the show classes earlier in the day by judge Jason Catts of Futurity Shorthorns.

The second youngest bull in the catalogue at 14-months of age, Represent R070 weighed 636 kilograms and was sired by Emu Holes Strata N011 which was purchased by the Rayner family at the 2019 Dubbo National Sale.

Ben Rumbel of Supple Whiteface said that Represent R070 appealed to him with his combination of structure and EBVs and is well suited the Supple stud program.

“I liked his head and neck extension; he’s got a really good muscle pattern and a nice phenotype with a reasonable set of numbers that will fit into what I’m using,” Mr Rumbel said.

According to Mr Rumbel Represent R070 will be put into the paddock later in the year for Spring joining.

Quartet Q245 sold through AuctionsPlus to a repeat Morganvale client from South Australia.

The second Morganvale sire to hit the $16,000 mark was Morganvale Quirk Q067, which sold to Dubbo local buyers DW and KG Leigh to go into their commercial program.

Sired by Yavenvale Milestone M397, Quirk Q067 was the heaviest bull in the catalogue, weighing in at 1182 kilograms and had the largest EMA at 145 square centimetres.

Morganvale stud principal Alan Morgan said he has been selling bulls at Dubbo for 37 years and this year they achieved their highest ever average price at $14,666.

Mr Morgan was not only delighted with their sale prices but was also extremely pleased to have buying support from repeat clients, describing repeat clients as “the strength of your business.” 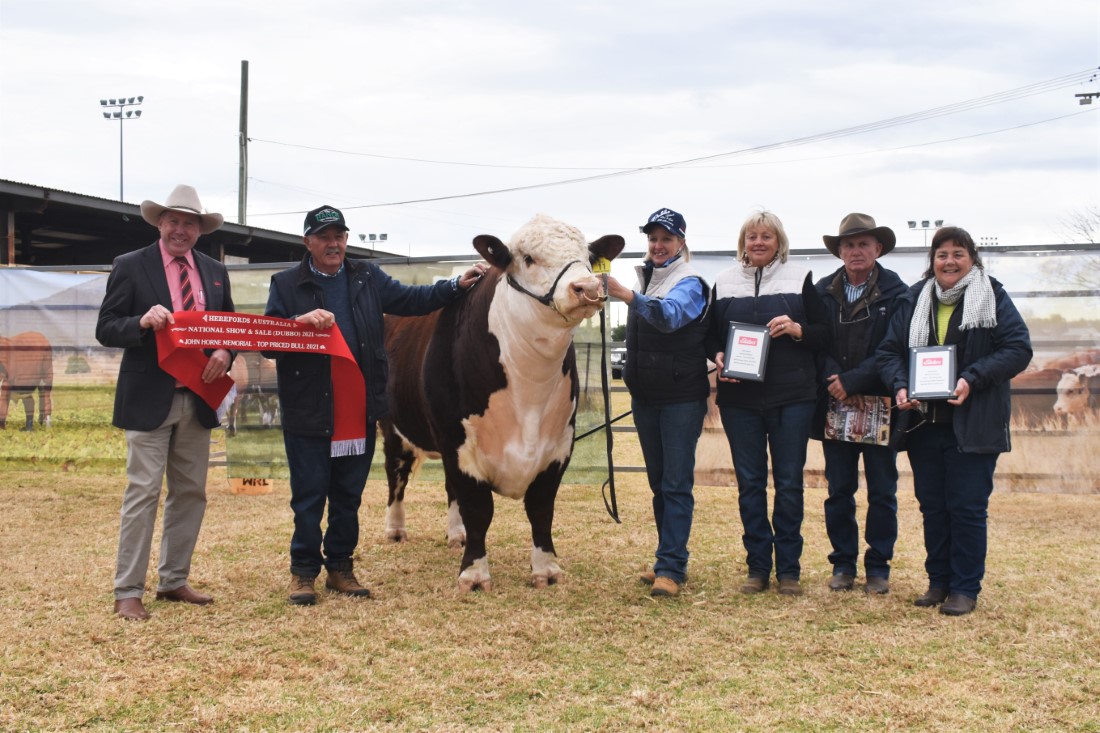 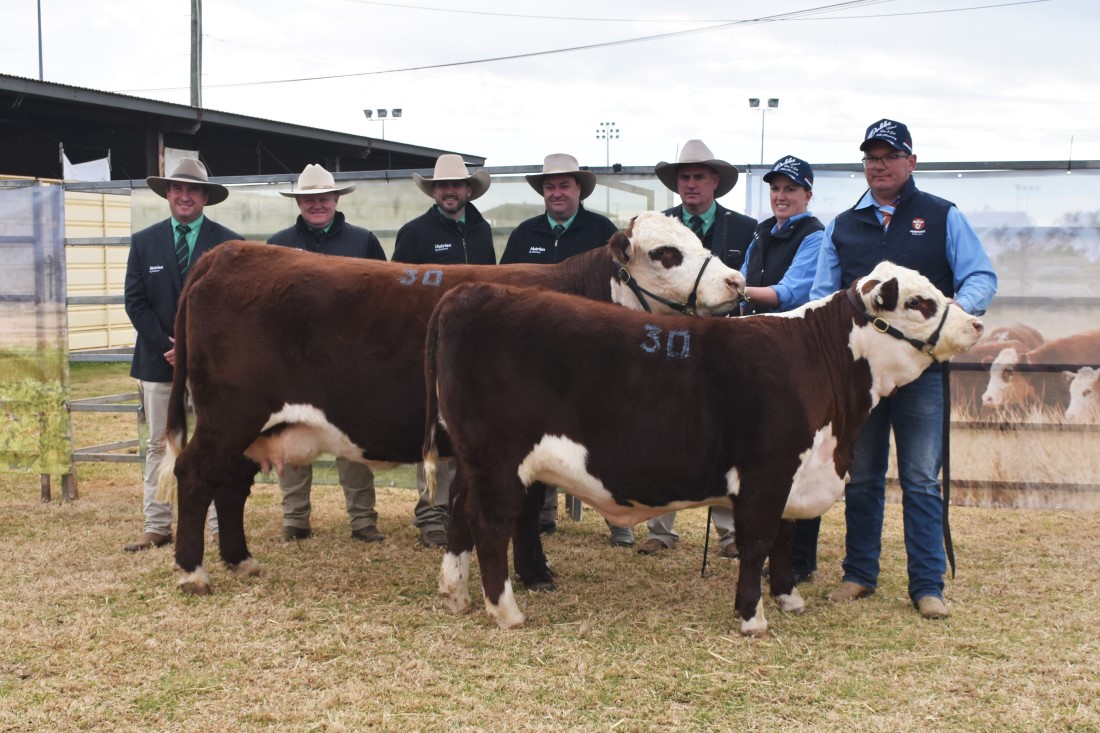 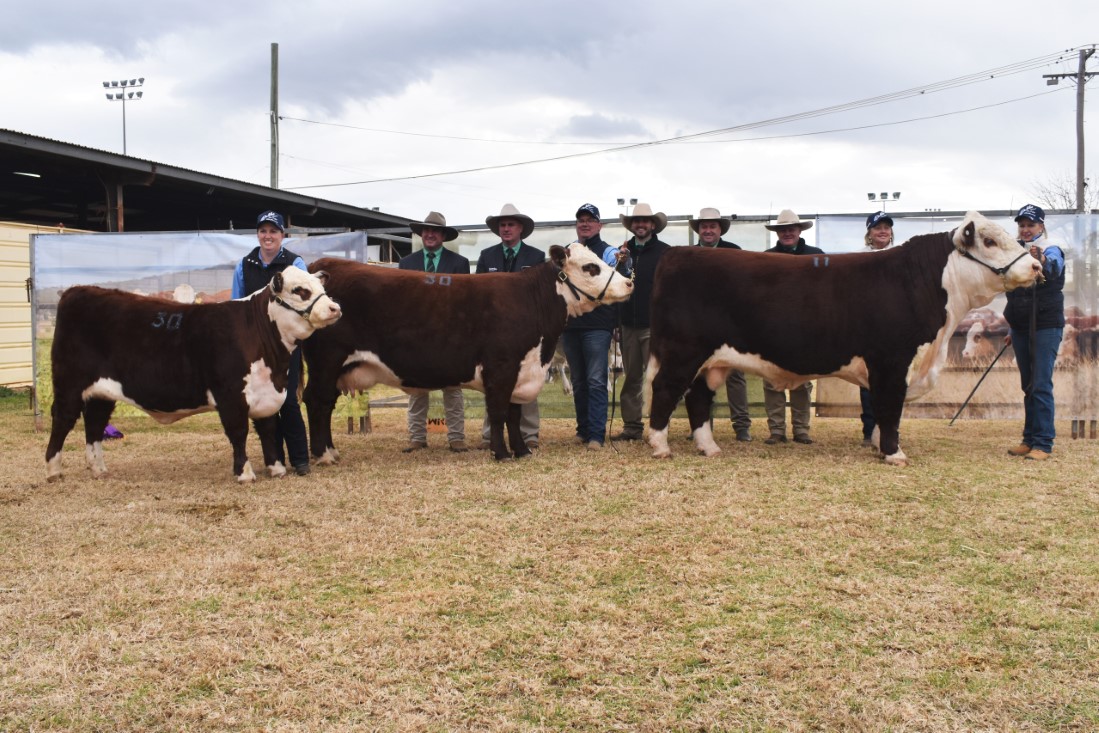 The top priced bull and female at the 60th annual Dubbo National Show and Sale. 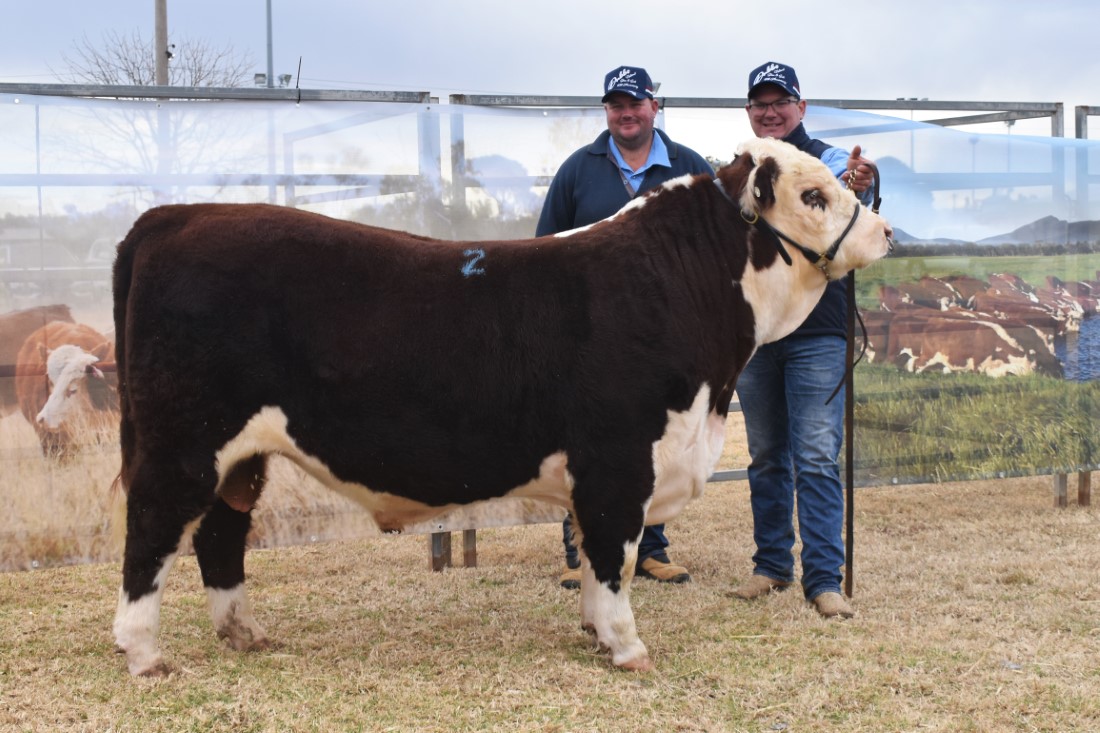 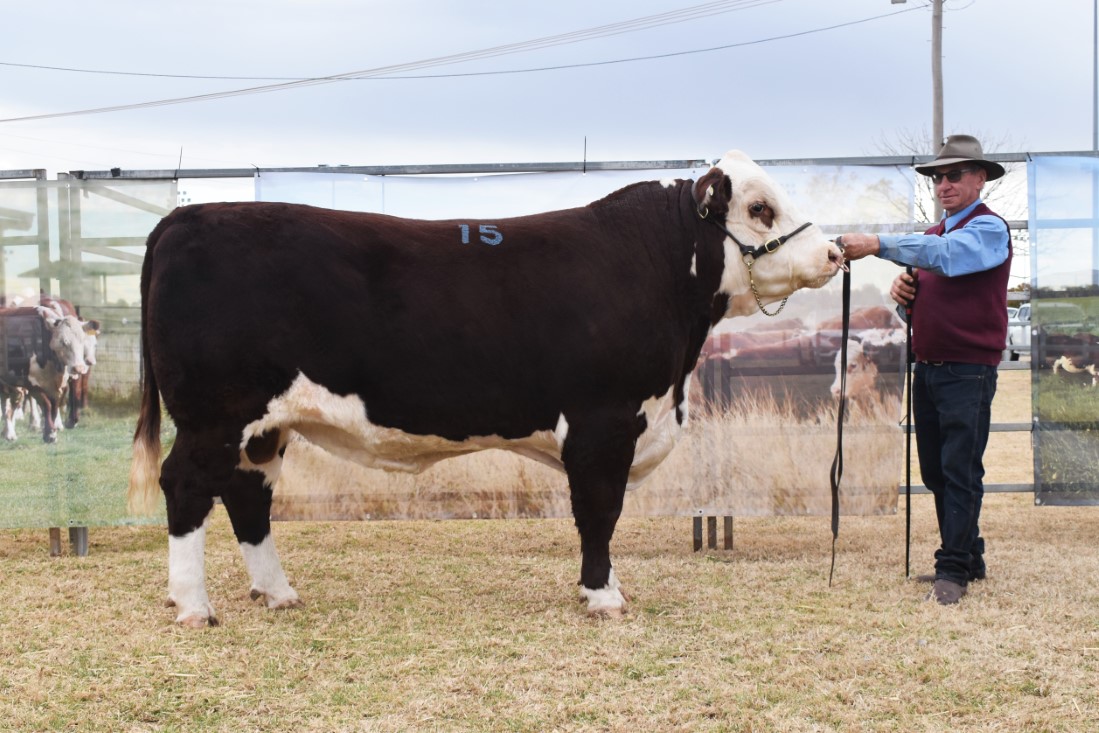 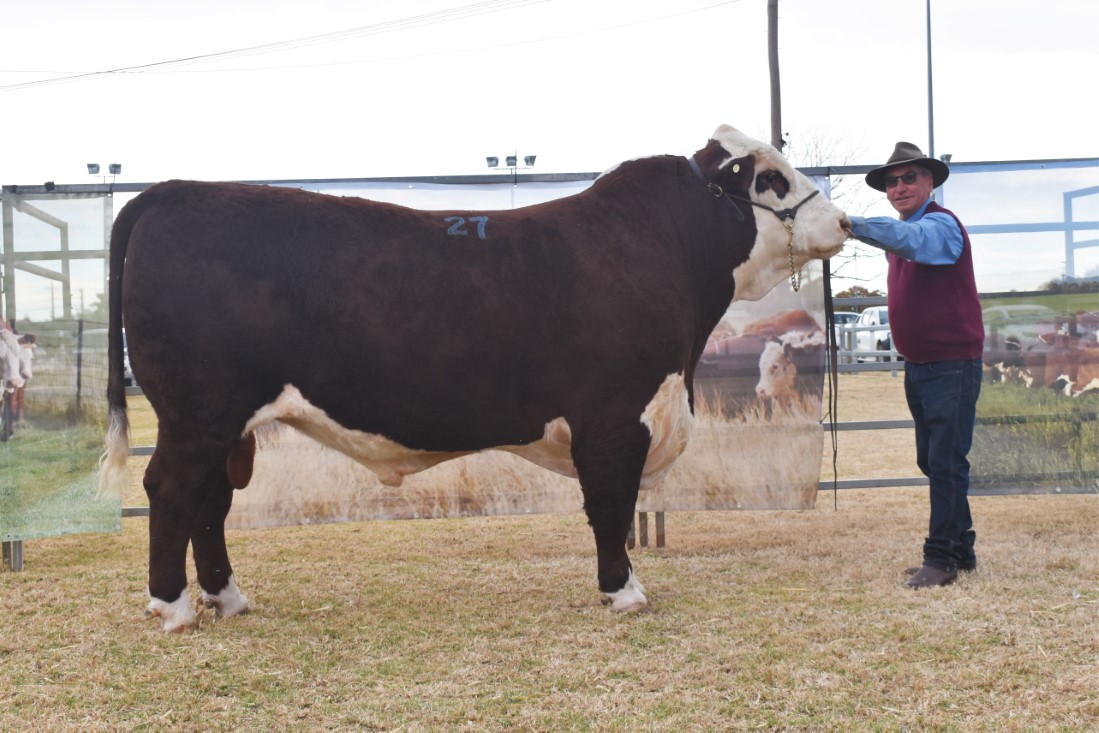