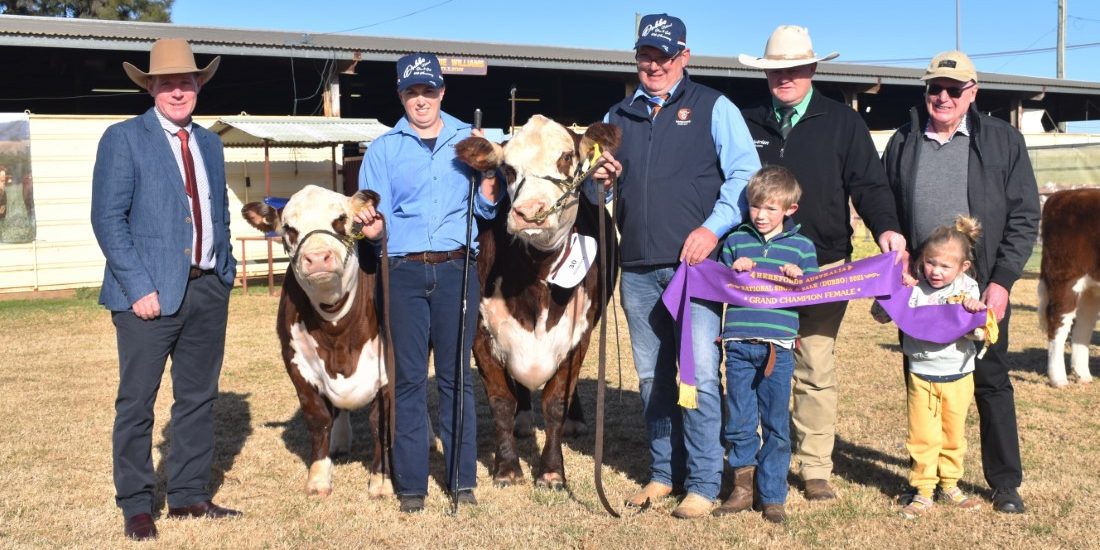 The second youngest bull in the catalogue at 14-months of age, Represent R070 weighed in at 636 kilograms and scanned with an eye muscle area (EMA) of 104 square centimetres and rib and rump fats of 10 and 15 millimetres, respectively.

“He’s a calf that gets around the ring like a cat and he parades so easily and nicely.

“I love the overall balance and structure of this bull, every time he’s stopped, he’s pulled up square, he’s good on the move, I like his maturity pattern, there’s just no holes in this bull,” Mr Catts said.

Andrew Rayner said they were “very happy” to have been awarded grand champion, particularly as it was the 60th year of the Show and Sale.

Exhibited by the Rayner family of Grathlyn Pastoral Co, Mudgee the rising three-year-old female was by influential New Zealand sire Koanui Techno 3062 and out of a Grathlyn Chance female sired by Centennial Horatio H033.

Mr Catts described Chance P061 as a “very valuable beef female of any breed” and commended the quality of her heifer calf.

“She’s a lovely female, I think she does everything right, she has a wonderful calf on her and is a real credit to the Hereford breed,” Mr Catts said.

According to Mr Rayner the family were looking for a particular type of female to enter in the Show and Sale and Chance P061 fit the bill perfectly.

“When [the committee] said they were going to allow females we decided we’d like to enter a nice two-year-old with a pretty calf and a neat udder and that’s what we went and found,” Mr Rayner said.

A second Grathlyn female; Grathlyn Jewess R015 was a close contender for the grand champion female title after being awarded the junior champion sash.

The eight-month-old heifer is a half sister to the grand champion bull, having also been sired by Emu Holes Strata N011.

The 22-moth-old sire weighed in at 904 kilograms with an EMA scan of 126 square centimetres and a scrotal circumference of 43 centimetres.

Sired by Supple Medallion, Queens Guard impressed the judge with his softness and strength of spine.

At 24 months of age Quarterback Q001 weighed 908 kilograms with the second largest EMA scan in the catalogue at 132 square centimetres.

Mr Catts described Quarterback Q001 as very “eye catching” and admired the way the bull moved around the ring.

The young sire was described as “structurally sound with great carcase attributes” by the judge.

Quarterback Q015 was also part of the team of three Ironbark Glen bulls which took out the prestigious President’s Shield award.

The trio of bulls were aged between 20 and 21 months and averaged 765 kilograms.

Both Quaser Q019 and Quarterback Q015 were sired by Ironbark Glen Major General M008 and Quicksilver Q010 was sired by Kanimbla Prospector M086.

Mr Catts praised the evenness of type among the three bulls and described the trio as “very commercially functional.”

According to stud principal Vic Camilleri, Ironbark Glen have been exhibiting at the Dubbo National Show and Sale for 30 years, but this is the first time they have taken out the President’s Shield award and they were “very pleased” with their 2021 show result.

The 16-month-old heifer was sired by Wirruna Lance L74 and out of a Llandillo cow sired by Yalgoo Break Out G075.

The rising four-year-old female was exhibited with three-month-old heifer calf, Ivy Bank Star S005 at foot and was described by the judge as a “big, impressive cow.” 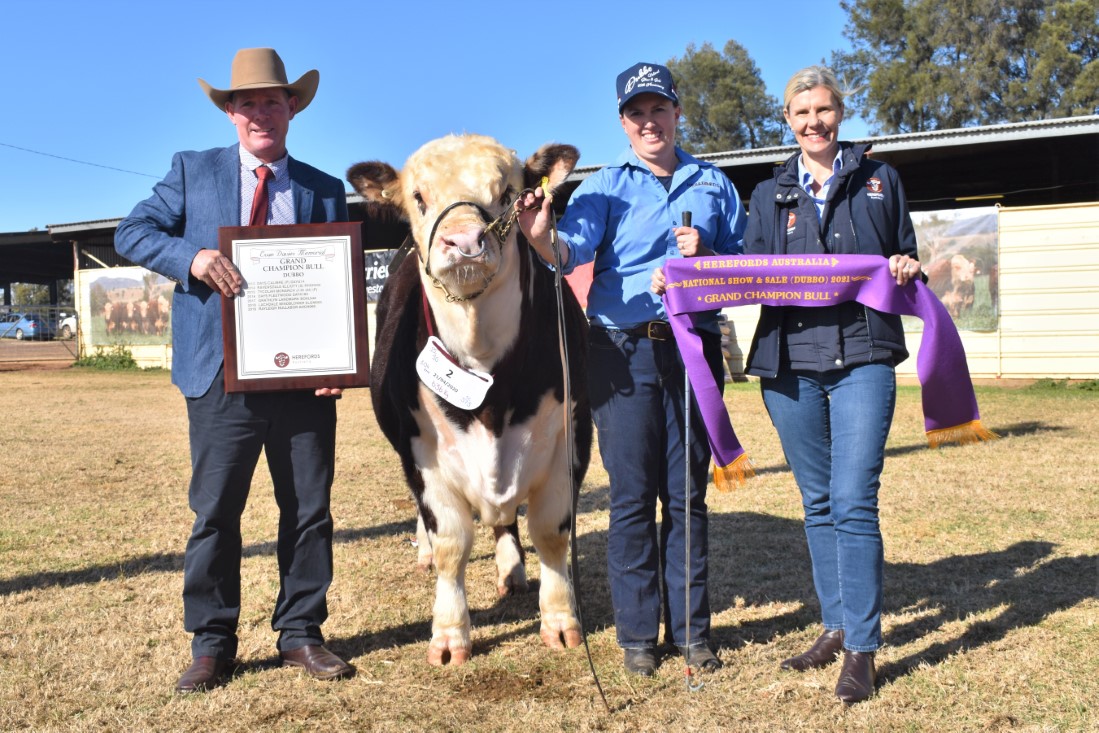 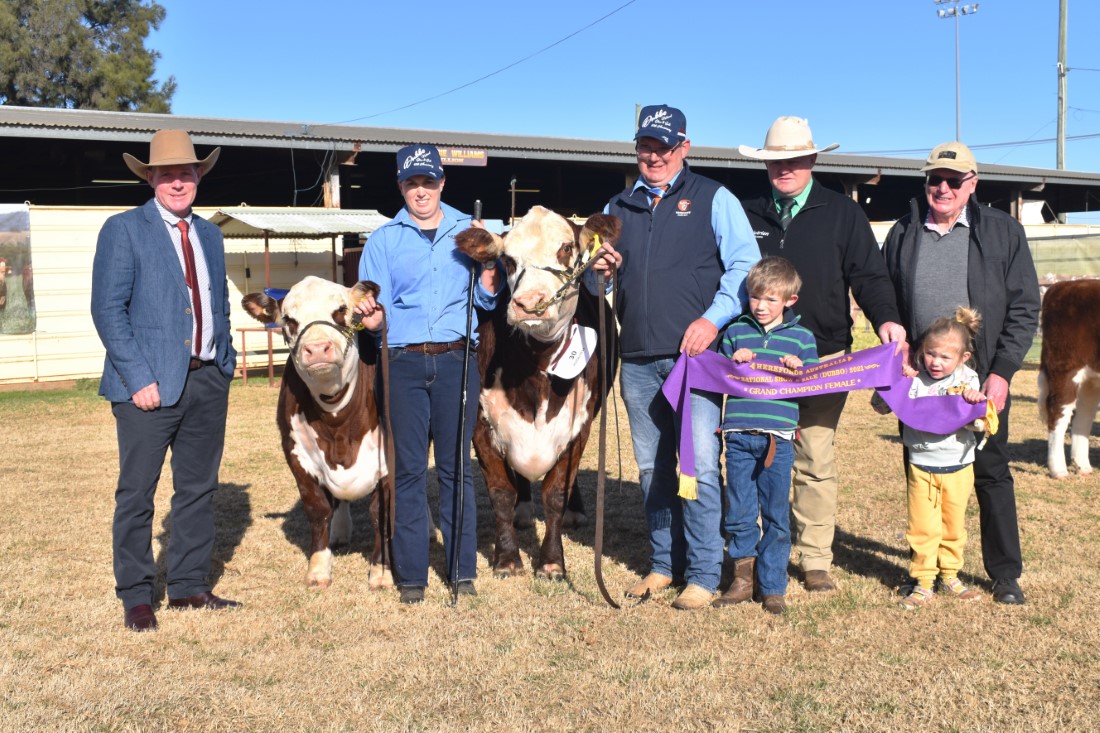 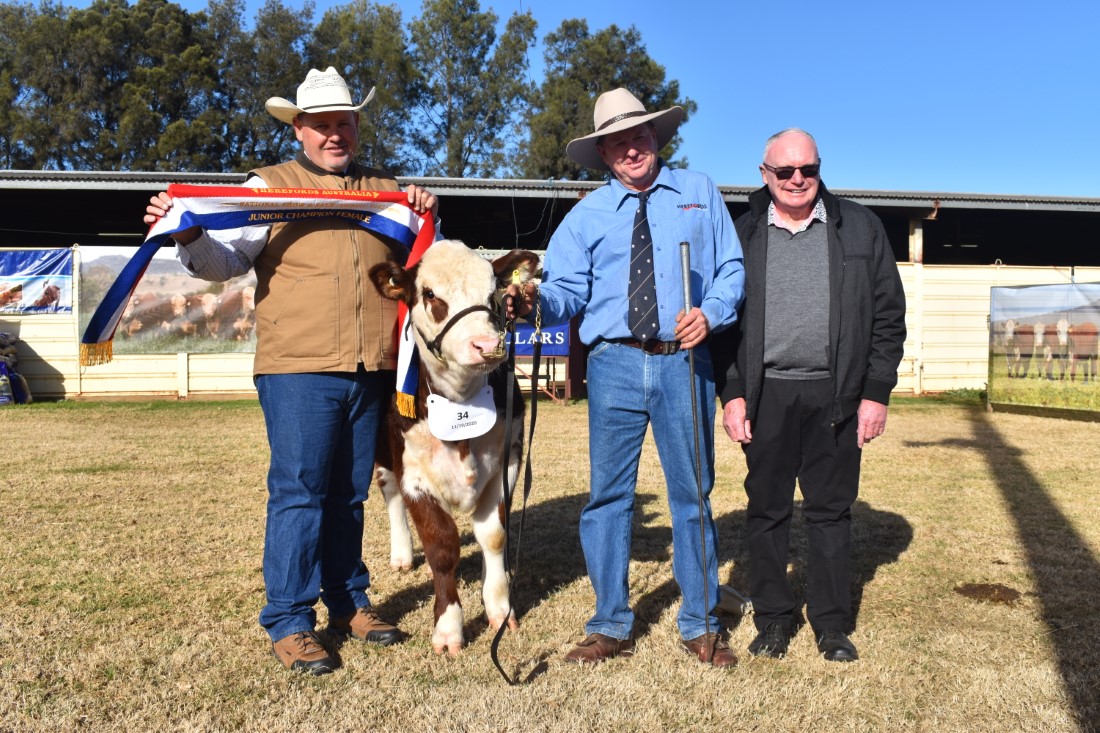 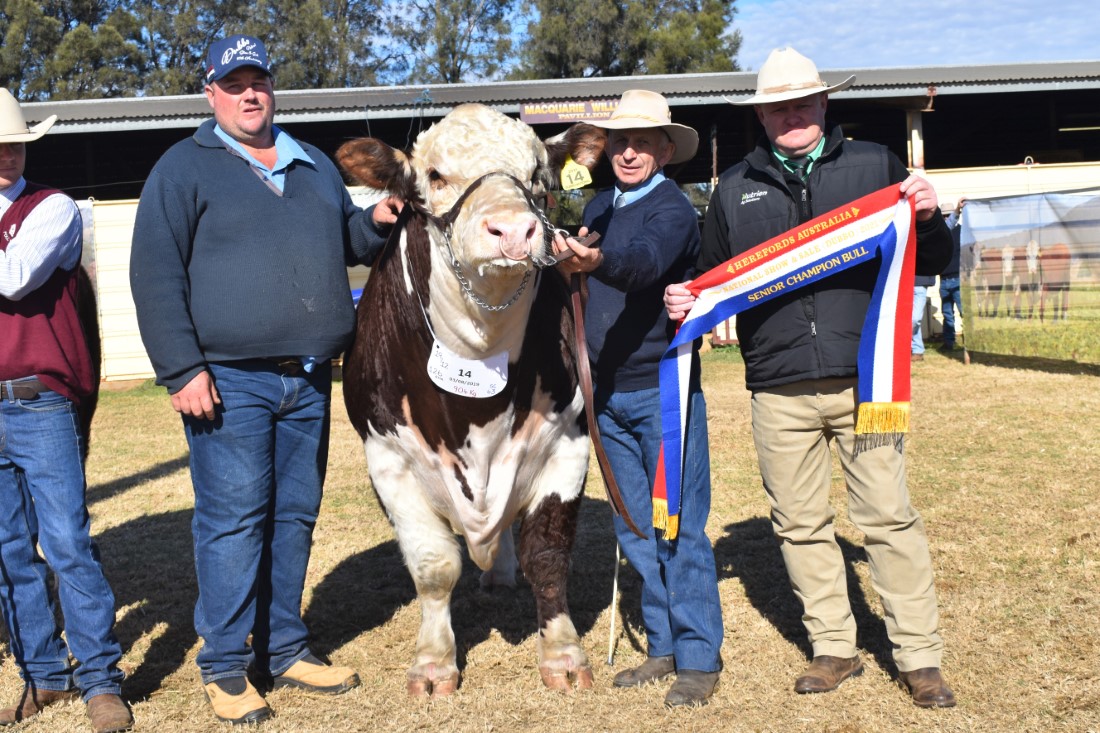 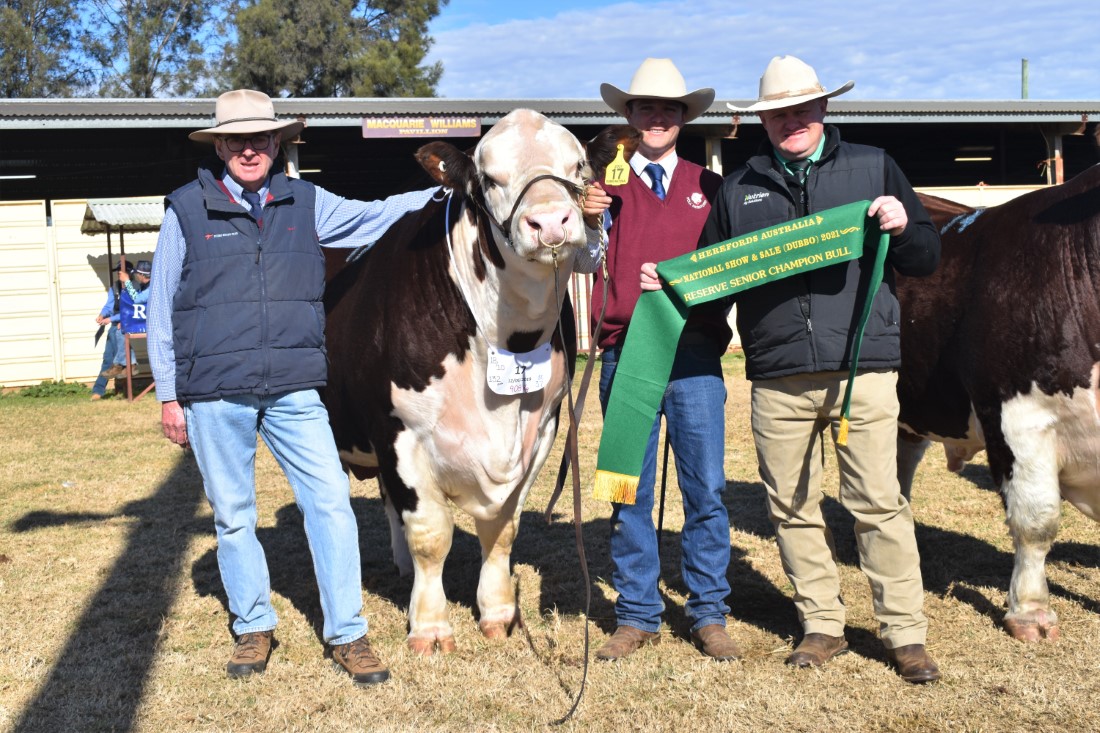 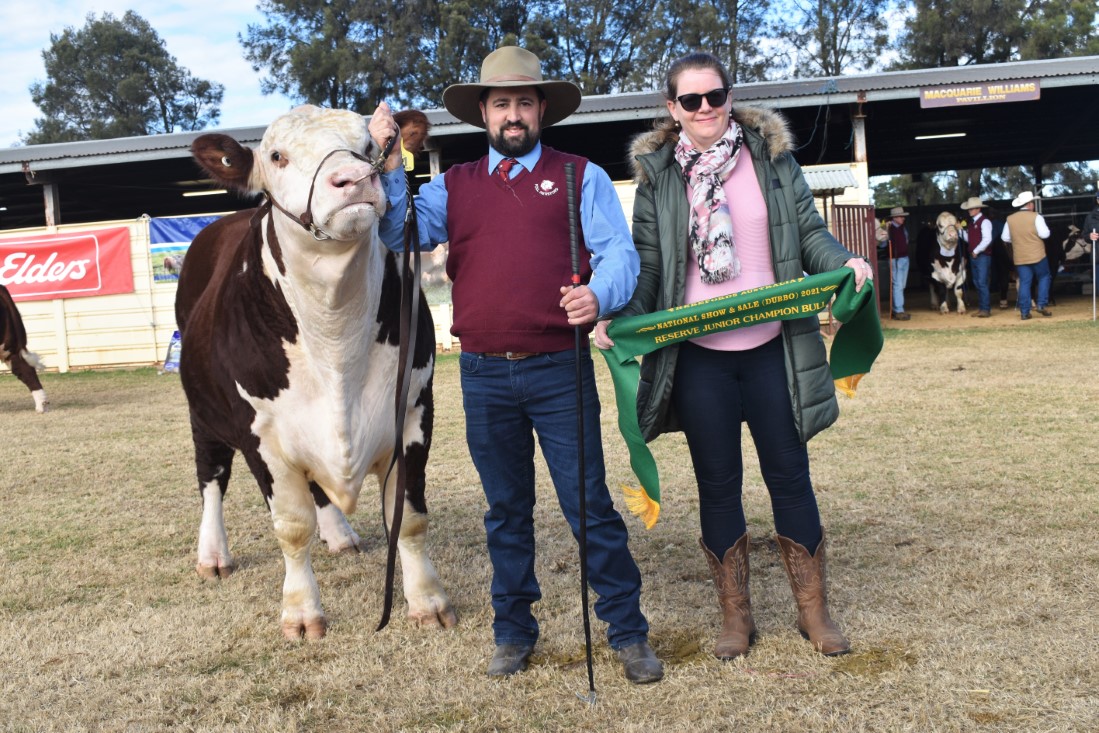 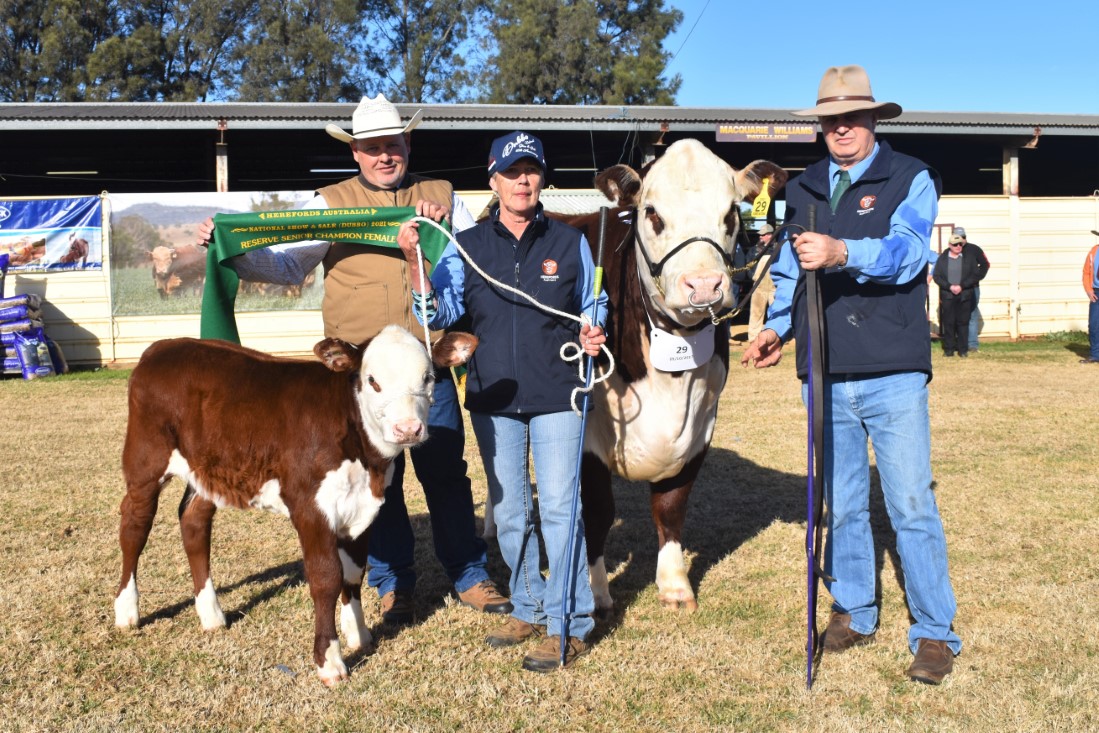 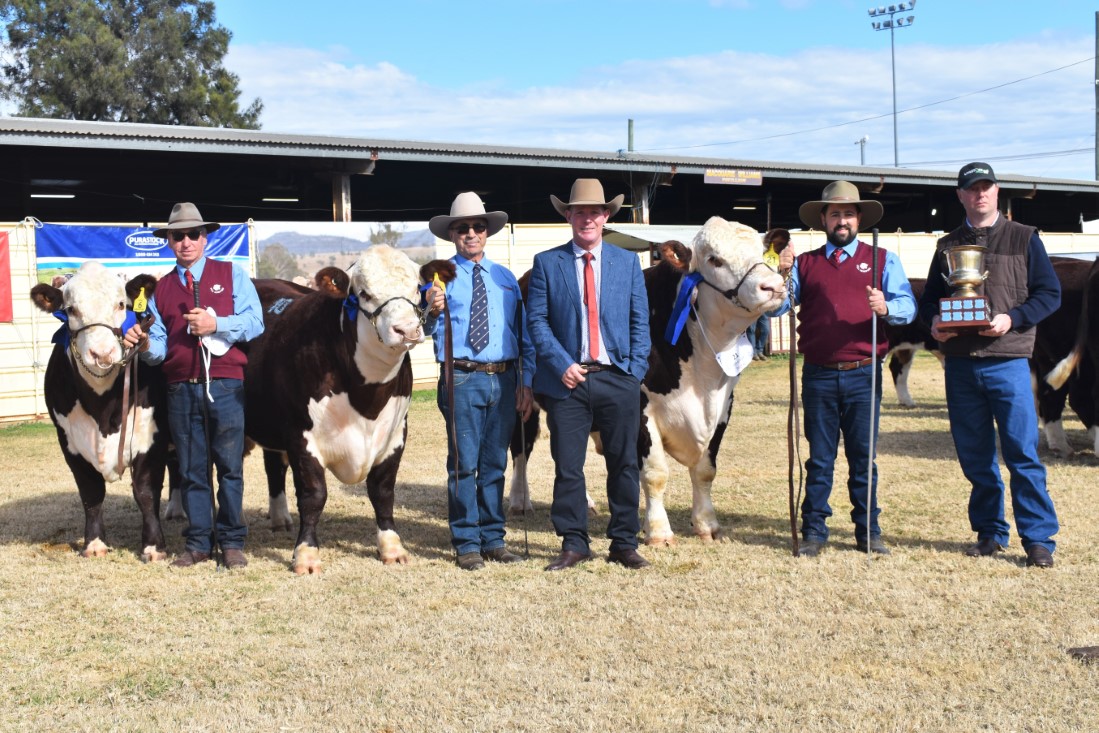 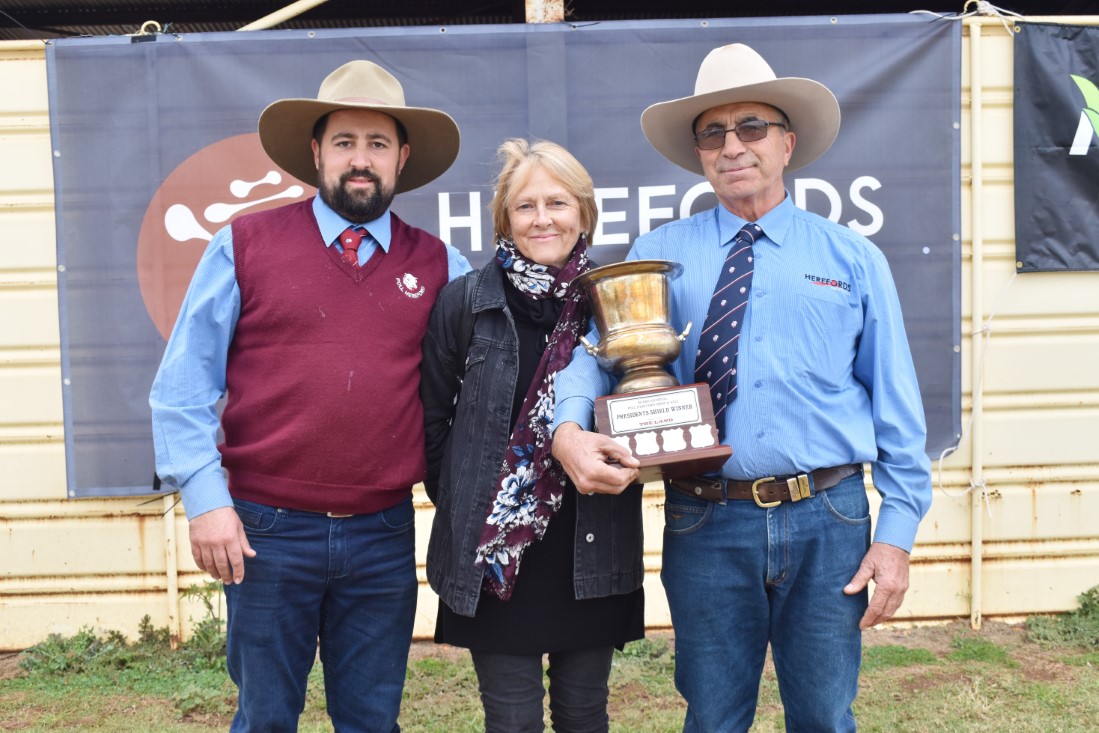 Adam, Carolyn and Vic Camilleri of Ironbark Glen with the President’s Shield trophy. 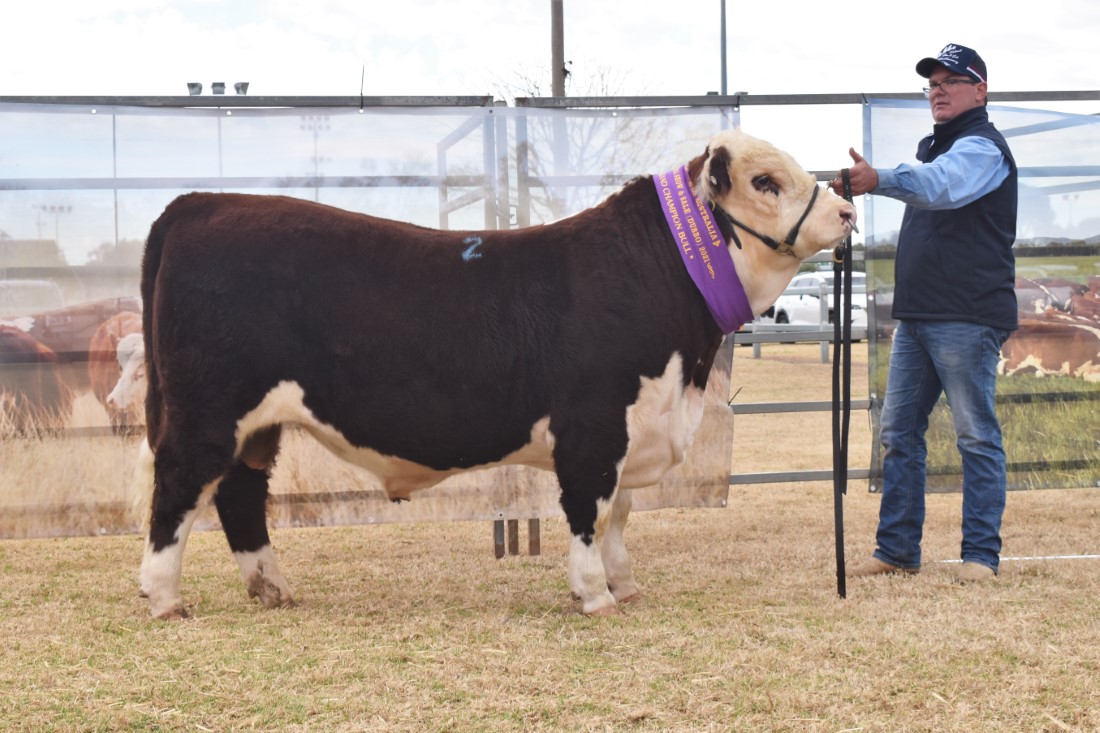 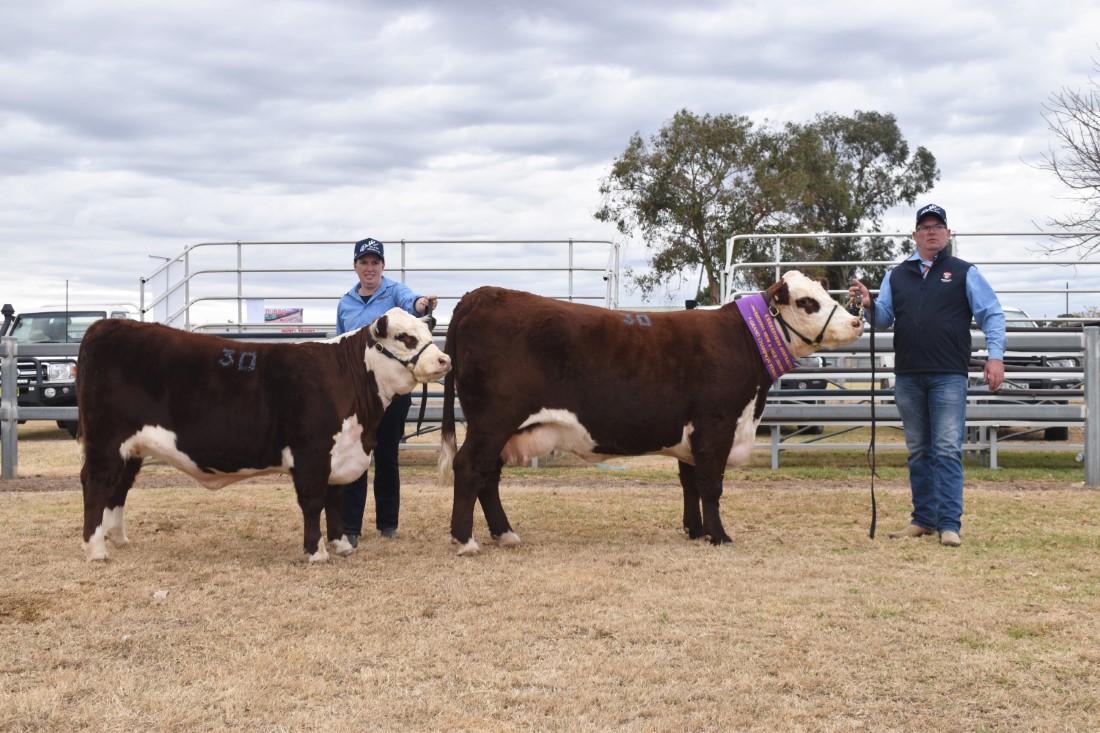 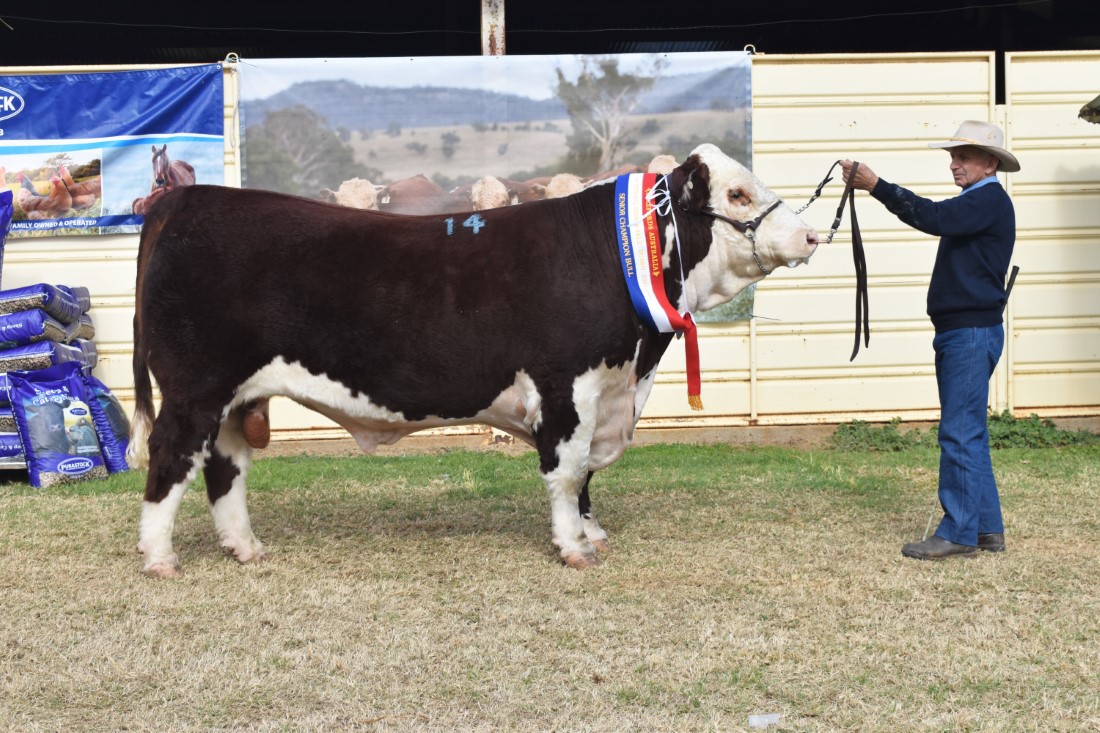 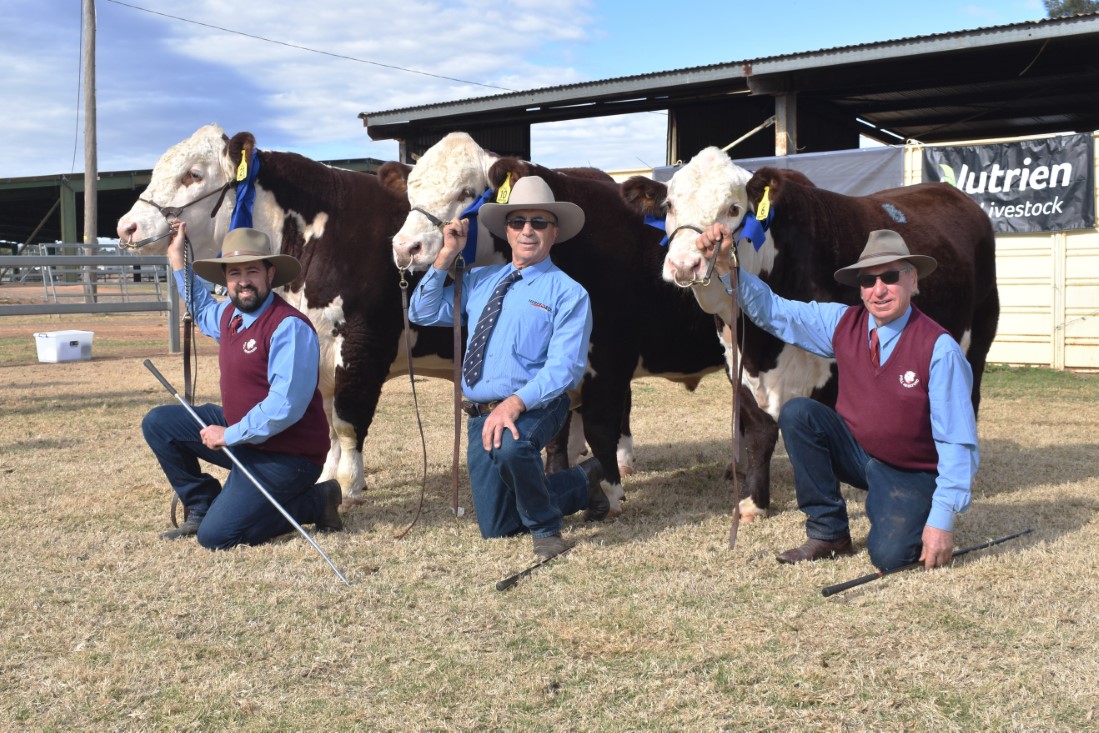