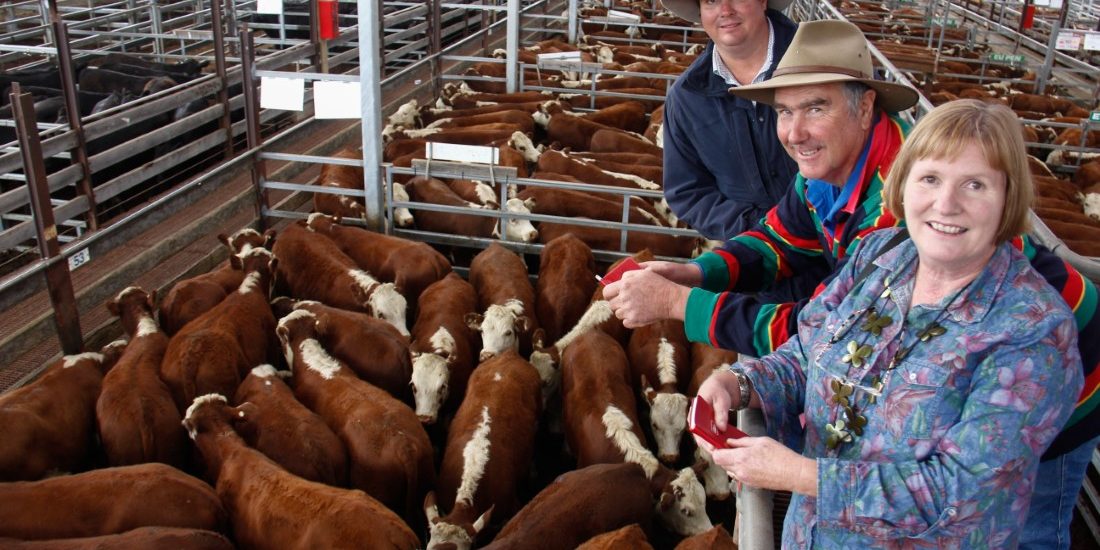 Hereford steers have pushed to the top of the liveweight price ladder at Hamilton as the breed benefits from the grassfed restocking spree sweeping the southern weaner sales.

The first drafts of Herefords to be sold at the centre on Tuesday averaged 506 cents per kilogram, according to results calculated by the Hamilton Livestock Exchange.

In dollar per head terms the 705 Herefords sold averaged $1675 across an average weight of 331kg.

“We are over the moon,’’ said breeder Ron Beaton, from the Giant Rock Partnership at Narren, after the family received up to 555c or $1912 for March/April drop calves that weighed 346kg – the price causing some gasps from the crowd.

“Anything over 400c was going to be good, this has been exceptional.’’

The Giant Rock herd has been based on Injemira blood for the past 10 years, and Ron said their focus on adding softness and more shape and thickness into their cattle was now being rewarded.

“We always had a lot of frame in our cattle, and we have come down a frame size and thickened them up and I think these are the best calves we’ve ever had – the great season has helped,’’ he said.

Buyer of the 555c pen was local bullock producer Ian Hermon from Myamyn who said Herefords were giving him the results he wanted off grass.

The 30 calves were to replace bullocks sold in November that averaged $2500.

“It is a lot of money to pay but I just like the Herefords, they always seem to do that bit better on our country,’’ he said.

Repeat buyers were to the fore on the Hereford run, led by bidding from commission buyer Andrew Lowe who was believed to be acting on behalf of Paul Mason from Wellington in NSW – COVID-19 border restrictions preventing some interstate travellers from attending.

Mr Lowe purchased both the lead runs of the noted Inverell and Beerik Partnership Hereford steers.

The Beerik calves, bred by Gordon and Jane McClure and son Owen at Coleraine, also claimed the champion pen award, which was judged by noted livestock buyer Ben Davies of Thomas Foods International.

The Beerik herd carries more than 20 years of Yarram genetics, and has been influenced by Injemira and Yarram Park in recent times.

Like other breeders, this year’s price results were the best the family has received.

“We are very, very happy – it has been a different group of buyers being more of a grass driven market today which is great to see,’’ said Gordon.

The work Western District breeders had put into the presentation of their calves for grass finishers was obvious, with cards detailing all the programs the steers were eligible for. Examples being Greenham’s Never Ever beef program; pasture fed branded beef programs, MSA and European Union accredited.

The first three laneways of Hereford steers at Hamilton were EU accredited, and this played a part in the strong overall sale result with feedlots and specialist bullock finishers prepared to pay a premium for cattle that fit this high quality beef market.

Other volume buyers of Herefords at the opening sale were Marc Greening of Injemira for his buy-back finishing program; southern bullock finishers from Victoria and South Australia; and the AFJ feedlot operation at Coonamble in NSW.

The highest cents per kilogram bid for Herefords was 572c/kg for a lightweight pen at 195kg. 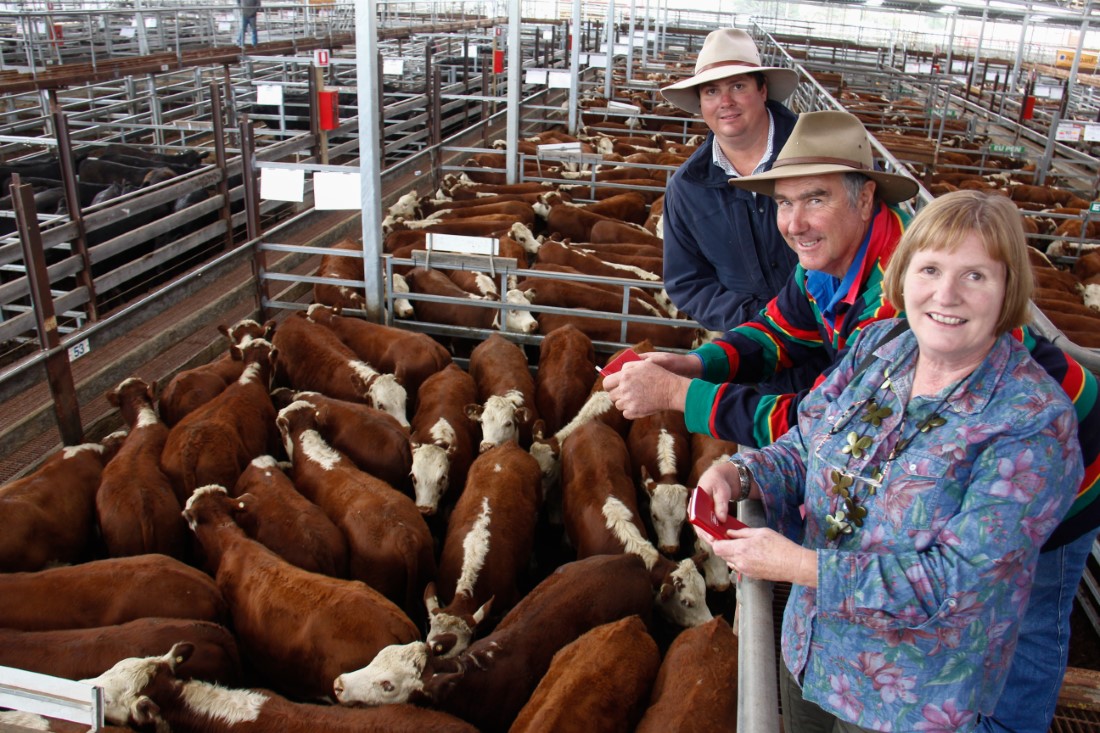 Jane and Gordon McClure and son Owen, Beerik Partnership at Coleraine, received up to 552c for 67 Hereford steers sold on Tuesday. 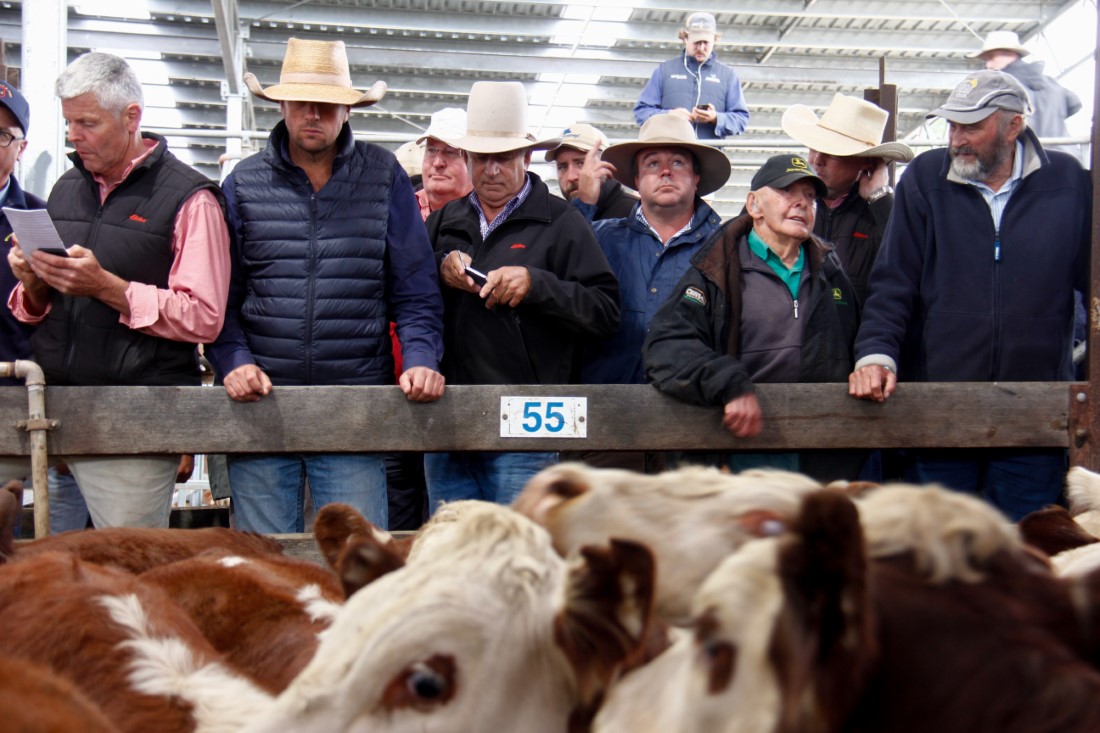 Buyer Marc Greening, Injemira, has another bid on steers at Hamilton this week. 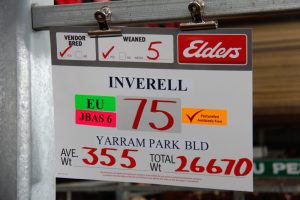 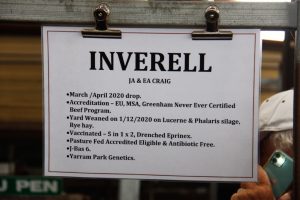 Hereford breeders have been targeting the specialist grass fed programs at Hamilton this week.