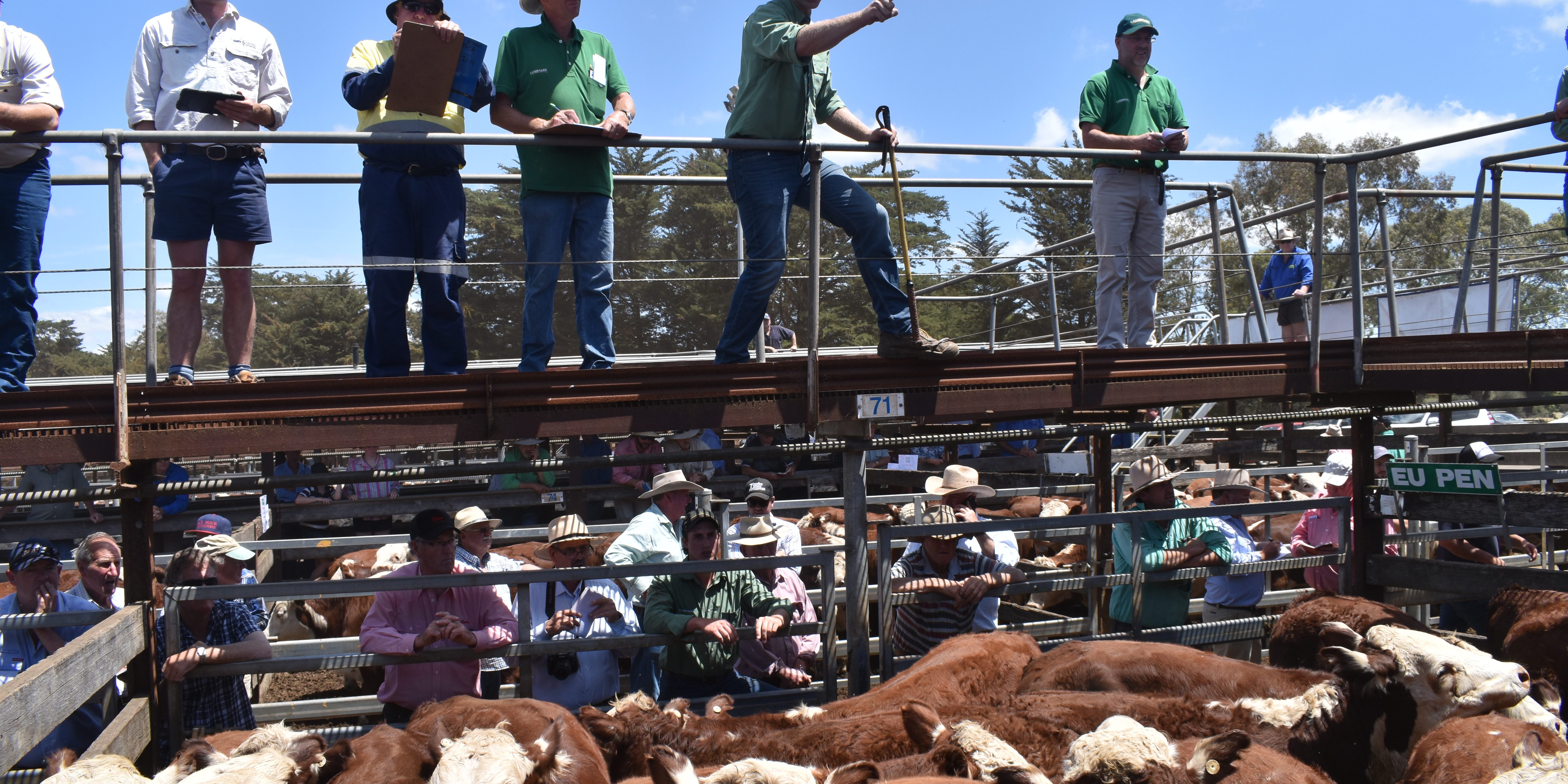 The Victorian western districts weaner sales kicked off on Tuesday afternoon at Hamilton with a quality yarding of 2986 steer weaners.

Bullock fatteners and feedlot backgrounders paid a premium for quality EU Hereford steers while the live export market snapped up around 600 head on the day.

The opening Hereford pen of the afternoon was offered by JA and EA Craig and sold for the top Hereford dollar per head price of $1212.

The pen of 46 Yarram Park blood EU steers averaged 391kg and sold for 310c/kg to Paul Mason of Wellington NSW.

JA and EA Craig also earned the equal top cents per kilo price in the Herefords of 317c/kg with 49 steers of the same breeding weighing 310kg, also selling to Paul Mason.

Ron and Denise Beaton of Giant Rock Partnership also made 317c/kg for their pen of 43 Injemira, Melville Park and Glendan Park blood steers.

The EU accredited steers weighed an average of 326kg and sold to WTG Cottrell.

The Herefords Australia champion pen was judged by Ben Redfern of Ray White Emms Mooney and was awarded to a pen of 17 Giant Rock steers, which averaged 363kg and sold for $1110 (306c/kg) to Deep Water Pastoral Co.

A regular buyer at the western districts sales, Paul Mason of Wellington in NSW purchased almost 200 head of cattle at Tuesday’s sale including the top dollar per head pen and the equal top cents per kilo pen.

“I’ll be buying again tomorrow. I usually buy about 600 head over the week.” Mr Mason said.

Mr Mason fattens the steers he purchases for around 12 months and then sells them to JBS at Scone.

“Sometimes my cattle get sold into the JBS Hereford Boss program. I haven’t been able to this year because due to the drought I fed the cattle cottonseed which is GM.” Mr Mason said.

Mr Mason said he was pleased with the quality of the cattle in the yards at Hamilton and likes Herefords for their ability to finish on grass.

“I buy my cattle mainly on quality (rather than price) particularly regarding their genetics.

“Herefords finish well on grass and the premium now is for grass finished with no antibiotics.” Mr Mason said.

James Brown from Ray White Albury was also at the Hamilton sale purchasing on behalf of two clients.

“We bought 160-170 head for two different clients, one backgrounding and one borderline feedlot entry weights where they’ll background them for a month or so.

Mr Brown was very impressed with the quality of the cattle offered, particularly in the Herefords.

Sam Savin from Landmark Hamilton was one of the selling agents on the day and identified feedlotters as one of the main buying strengths at the sale.

“The buying strength for heavier cattle (330kg plus) was feedlotting.

“On the very well-bred Hereford EU cattle the buying strength was Paul Mason from NSW. Other than Paul there wasn’t a lot of background competition due to northern conditions.” Mr Savin said.

Quality EU cattle were in high demand at the sale with buyers willing to pay top price for heavier EU Herefords.

“As soon as you come under the 320kg I don’t think the premium was there, but for feedlotting there was definitely a premium for EU.” Mr Savin said.

“EU was definitely a premium. We had repeat purchasers in Paul Mason from Wellington and Marc Greening from Injemira buying quality cattle that do perform.” Mr Malseed said.

Mr Malseed was pleased with the quality of the cattle yarded and with the prices paid for said cattle.

“The dollar per head rates in the tops were about $1200 for the Herefords and north of $3/kg which was good.

“The sale overall was very good, it started off well with the blacks and got onto the Herefords where we had some exceptionally well-bred Hereford cattle that sold at great rates.” Mr Malseed said. 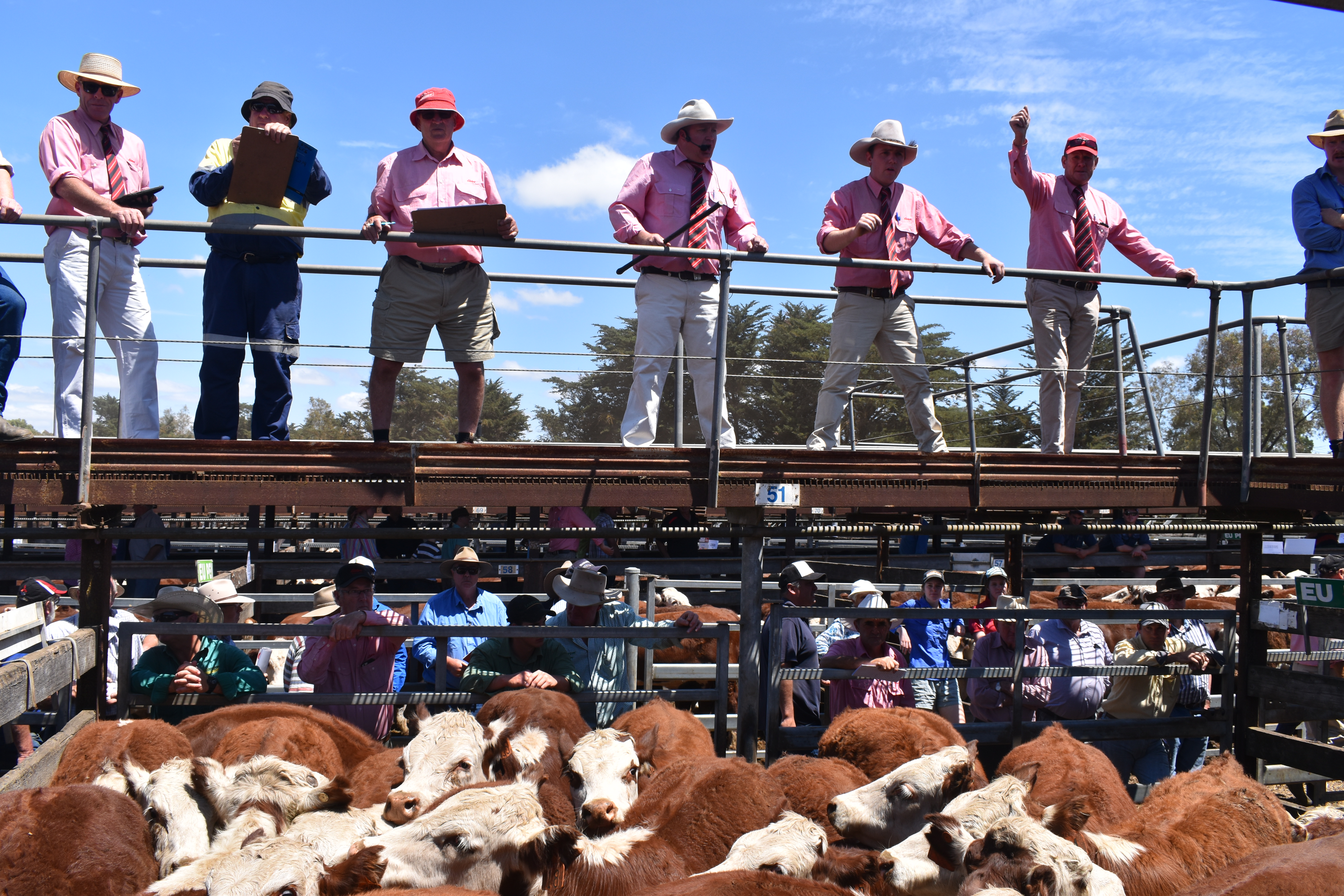 The Victorian western districts weaner sales began on Tuesday at Hamilton where 2986 weaners were sold under the hammer. 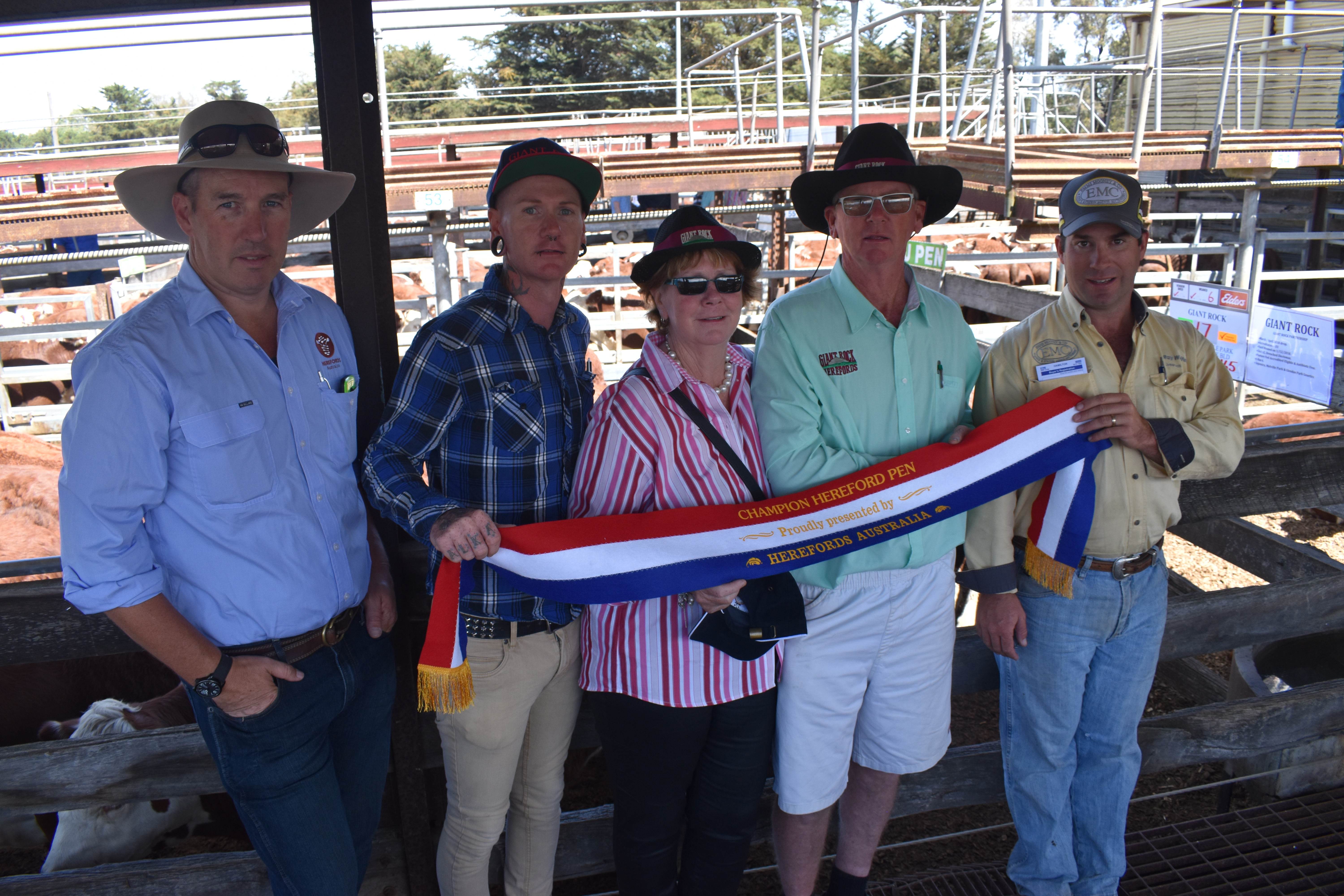 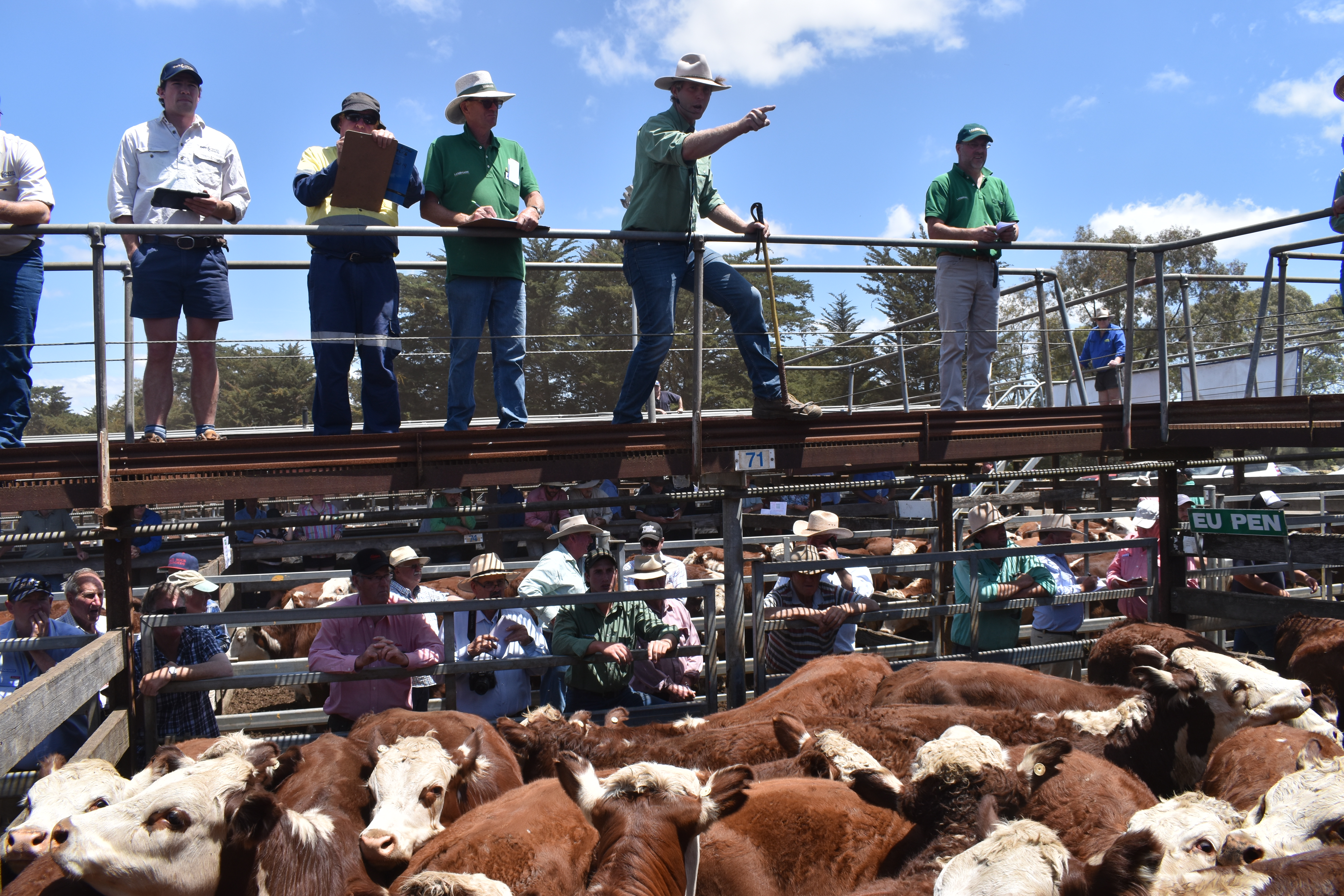 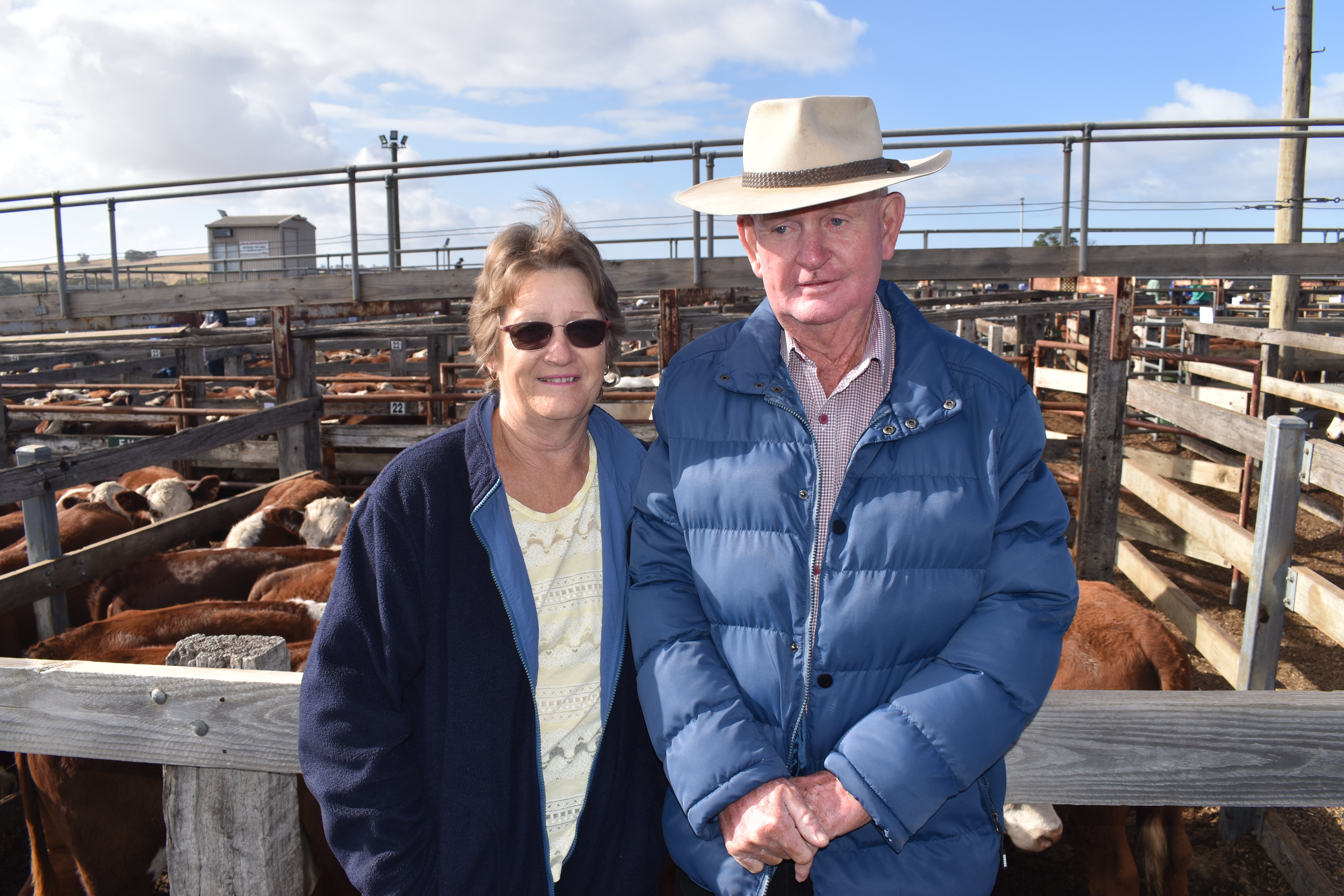 Paul and Maureen Boland of Casino NSW were spectators at the western districts sales. 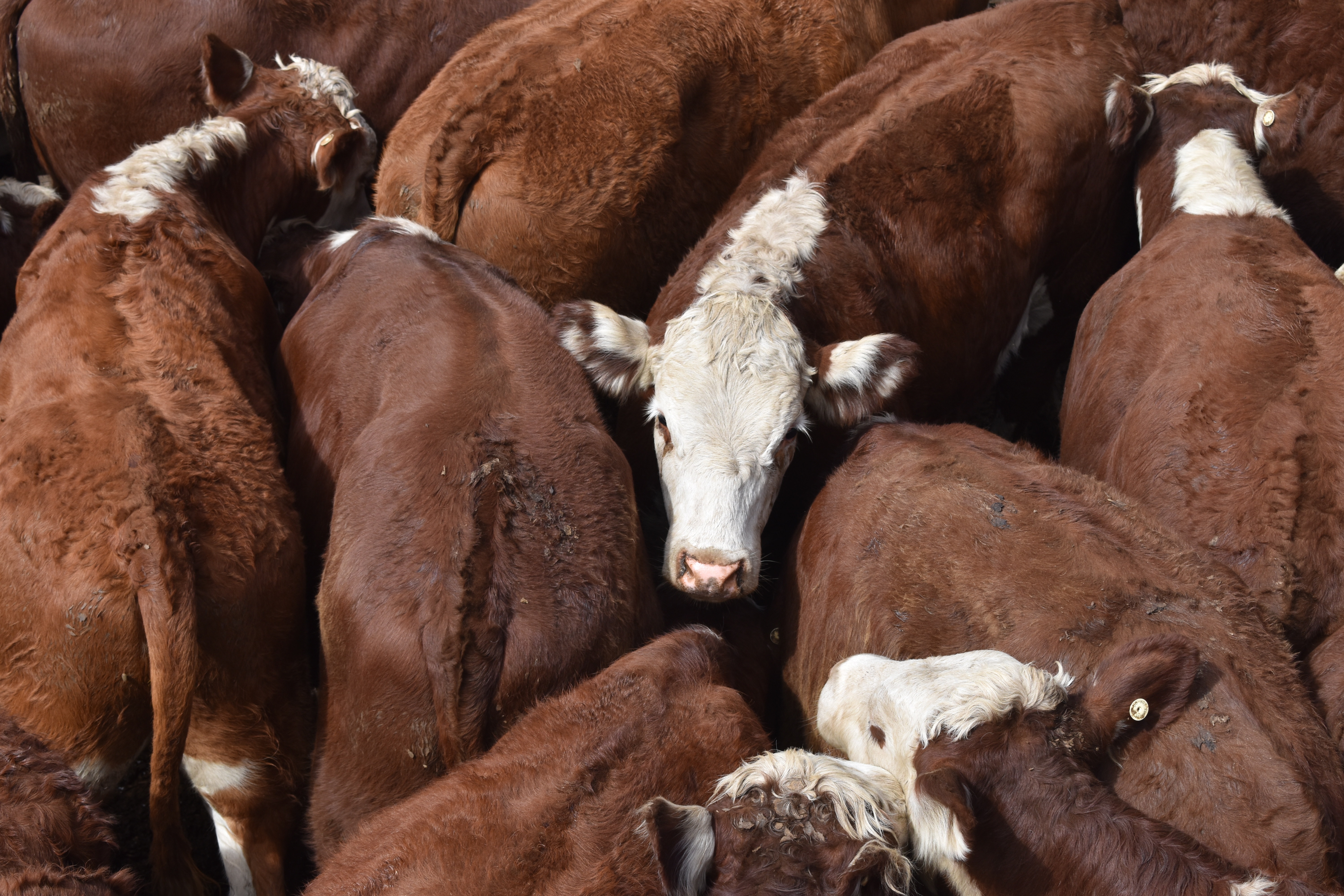 Premium prices were paid for top EU Hereford steers at Hamilton on Tuesday.