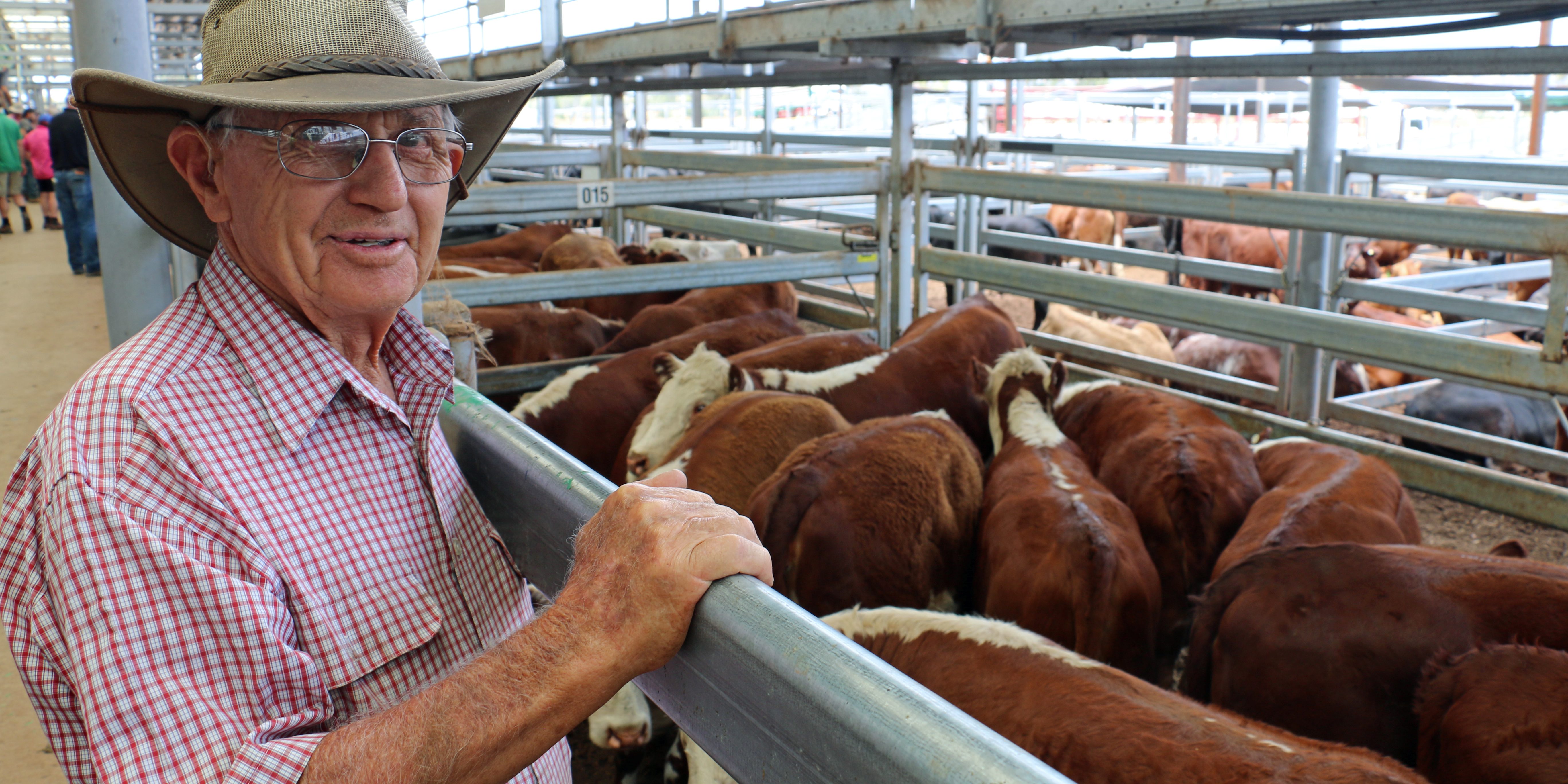 The run of whiteface weaner sales finished the week at Wodonga on Friday with autumn 2017 drop steers hitting 377c/kg and heavy heifers up by $50 a head.

The week finished off with a bang as buyers were greeted by row after row of quality Hereford steers and heifers.
Backgrounders, restockers and steer finishers scrambled over the lighter weight end for premium grassfed programs, paying up to 377c/kg – up 24c/kg on the previous day’s sale.

Topping the run of grown Hereford steers was the annual draft of 16-22 month-olds from Alastair McKoy, Ohio, Holbrook.
The top pen weighed 536kg and sold for $1400 or 261c/kg.

The pen of 20 Bayunga blood, Kooringal bred, autumn drop calves weighed 413kg and sold for the top price for the autumn drop steers of $1270 to Gippsland steer finisher Graeme Osborne.
Mr Henry described the steers as even and showing good bone.
Over the past three days he has sourced 100 Herefords, 280-350kg liveweight and an average of 322c/kg for feeder or kill cattle.
“I have been buying here for the last three to four years and am sourcing quality steers for Hereford breeder Jim Hann,’’ he said.

The McPherson family, of Whorouly, topped the Black Baldies on a cents per kilogram basis with 290kg steers making 351c/kg or $1020 to Paull and Scollard, Albury.

The first stage of the heifer dispersal from Emu Park Pastoral, Deniliquin, was much anticipated by lot feeders and restockers.

Restocker Leanne Gray, Finley, paid $920 for a pen of 23 weighing 359kg, and plans to join them to a Yarram Park bull.
Overseeing the Emu Park dispersal is Joyce McConnell, who said the heifers were normally finished for the trade.
“Next week we will offer a beautiful line of 103 tops of the drop heifers – it will be a sad day to see them go,’’ Mrs McConnell said.

Cecily Trickett, of Culcairn, manages the herd belonging to Australia’s oldest commercial Hereford breeder, 100-year-old Isobel Webb.
Mrs Trickett said this year was the first Mrs Webb had been unable to see her weaners off due to an illness.
Mrs Webb’s draft of Wirruna blood calves, eight to nine months, topped at 370c/kg or $975.
She also topped the Hereford heifers on a cents per kilogram basis at 324c/kg.

Bill and Mary Goldsworthy, Eurobin, sold Cloverbank and Kaludah blood unjoined heifers, 18 months, 488kg, for $1225.
It was above their expectations of $1100.
“We have sold a paddock and had to destock – next week we will offer 15 PTIC autumn calving heifers,’’ Mrs Goldworthy said.

Ian Wilson, Ruglen Herefords, Bungowannah, described the overall yarding as outstanding and of exceptional quality.
“This is a reflection of the investment made in good genetics,’’ Mr Wilson said.
He was on hand to see Robin and Joanne Warner, Danetree Herefords, Wooragee, sell Danetree and Ruglen blood steers, 374kg, for $1145 or 306c/kg to Rod McKenzie, Corcoran Parker, Corryong.
Mr Warner said the steers were 40kg heavier this year and sold on par with last year’s draft.
“The prices have given us incentive to invest in new sires, fertiliser and improvements,’’ he said.

Autumn-drop sale topper Andrew Sleigh, Jerilderie, was pleased with the 413kg weight of his top pen after a difficult year.
Andrew offered 70 steers and his brother David Sleigh, Ruffy, sold 100 steers.
“Our average rainfall is 14’’ (350mm) and we have had 13” (325mm) since early October,’’ Andrew said.
“Last year our tops weighed 369kg so we are 40kg up – we had no great expectations around the prices as we understand the industry and have been in it for a long time now.’’

Elders Albury auctioneer Brett Shea said the sale was a great way to round out two weeks of selling.
“We saw good local restocker competition on the Hereford cattle to be backgrounded for premium grassfed programs,’’ Mr Shea said.
“Commission buyers from the north were strong and we had EU heifers go to the Princess Royal feedlot in SA.
“You would go a long way to find a better run of Hereford calves than what we had today.
“That competition was driven by restockers working on a dollar value as opposed to cents per kilogram.’’

Mr Shea said feeder and restocker competition had buoyed heifer prices.
“There was really solid support for good quality joinable heifers as there is a shortage of them,’’ he said.
Mr Shea said the steer top of 377c/kg tracked alongside the lighter Angus steers at last week’s sale.
“If the cattle are fresh and presentable, backgrounders will pay the dollar value,’’ he said.
Mr Shea encouraged more producers to become EU accredited and widen their exposure to buyers and premiums. 3. The Herefords Australia champion pen of autumn 2017 drop steers weighed 413kg and were sold by Sleigh Pastoral, Jerilderie, for $1270 or 307c/kg. 8. Jeff Cooper, Jeff Cooper Agencies, Corryong, paid the top price in the Hereford pens of 377c/kg for steers to background in the Upper Murray. 9. Cecily Trickett, Culcairn, sold Wirruna blood steer weaners up to 370c/kg on behalf of Isobel Webb, Morven. Isobel is the Hereford breed’s oldest living commercial breeder and is due to turn 101 on Anzac Day. 14. There was much anticipation over the offering of the Emu Park Pastoral heifers after the Deniliquin property’s sale. The opening pen of Yarram Park blood heifers sold for $1240 to Princess Royal feedlot, Burra, SA.