Herefords Continue to Fire in Benchmark Weaner Sales for 2018 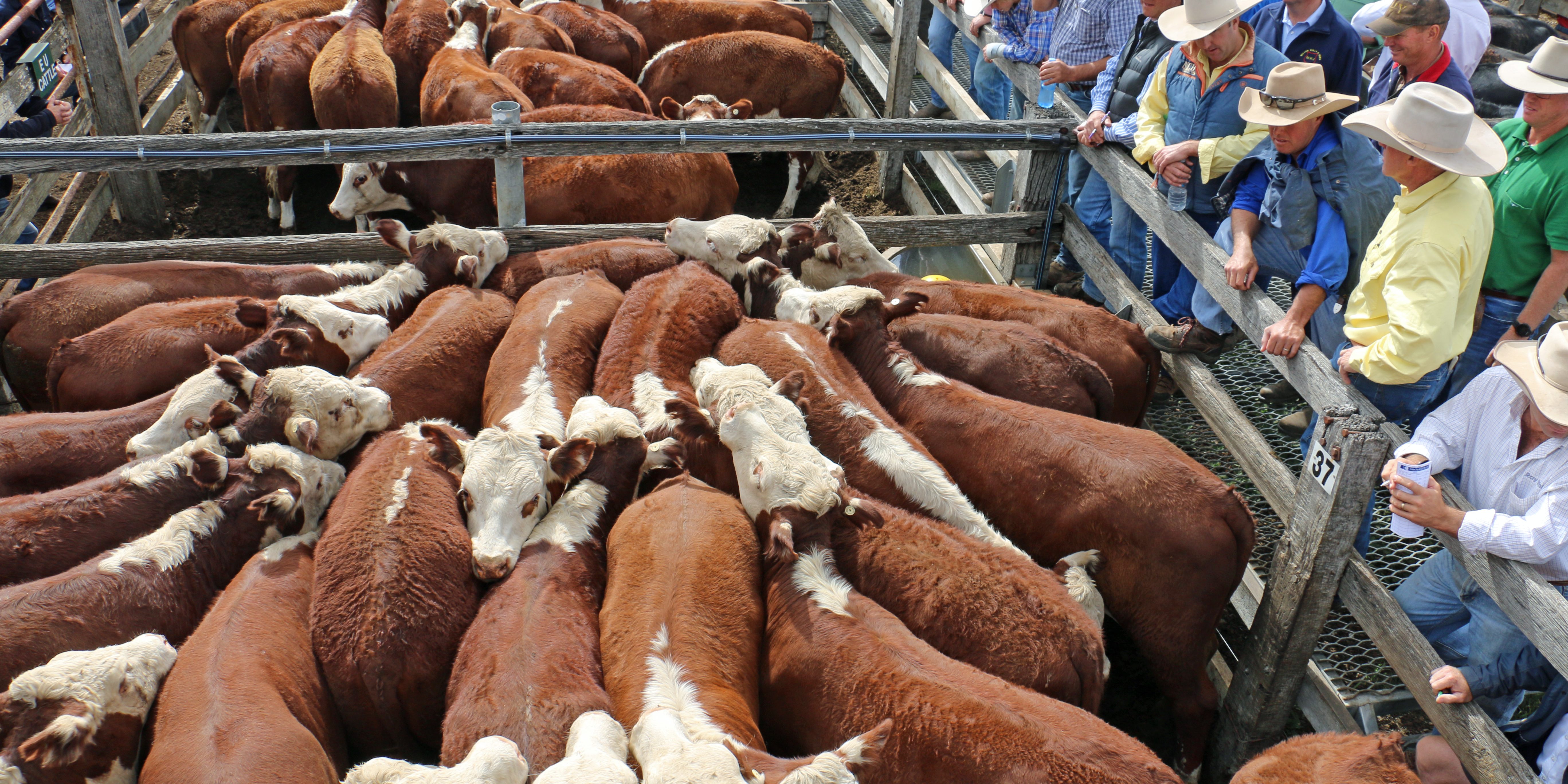 So how did the Hereford breed track this year across the week of the opening weaner sales in Victoria?

The yarding of 8488 whiteface cattle across January 8-10 drew resulted in steer finishers jockeying for space at the rail with the larger processors, lotfeeders and exporters.

A feature of this year’s sale was the change from the traditional Friday to Monday for Victoria’s Premier 62nd annual steer weaner sale at Casterton to attract more buyers.

However, an increase from two to three sales at Wodonga this year meant some buyers headed north on the Wednesday.

In the wash-up across the week of sales, the heaviest autumn-drop Hereford steers averaged 431kg – 3kg down on last year’s top weight – and sold at the Hamilton feature sale.

The Hamilton Independent Agents feature sale produced the top price of the week for autumn 2017 drop steers of $1319.

Black Baldy steers finished the week on a top of 351c/kg set at Wodonga on Friday.

An additional player was Landmark International sourcing whiteface steers for grainfeeding in South Australia and export to Russia.

Across the week, Angus weaners had a weight advantage, resulting in a top price of $1410 at Wodonga, however lighterweight whiteface calves outpaced Angus in the pens displayed with weights (over 150kg) to top at 401c/kg.

Hereford vendors were realistic about their market expectations this year, rounding their anticipated prices down by $1/kg on the back of a subdued prime market.

Mike Trewin, Bungil, spoke for most producers when he said last year’s record prices were reinvested back into the farm.

“Last year’s record prices took the stress out of life, enabled me to buy good quality bulls and fertiliser, and do pasture improvements,’’ Mr Trewin said.

“We were not frugal with the money and put it back into our cattle and properties.’’

Bill and Geoff Lambert, Taronga Poll Herefords, Paschendale, have been long time vendors at the Casterton sales and drill down to produce statistics each year.

This year their consignment of 178 March-April drop steers equated to 59 tonnes of beef, with an average liveweight of 332kg and average price of 319c/kg or $1060.

Their top pen weighed 391kg – the heaviest calves they had ever offered.

“For us, the prices are sustainable but there is no new tractor on the horizon.’’

So, how are the steer finishers fairing at the other end?

Paul Mason, Wellington, NSW, has been buying well-bred weaned Hereford steers from the western district sales for many years for grass finishing under the JBS Australia Great Southern program.

Mr Mason aimed to source 600 steers across the western district sales – last year he paid to a top of $1400 for weaners and sold them over-the-hooks pre-Christmas to JBS at an average of $1850.

“I look at the genetics and go for the cattle I can take through to heavy export weights (360kg dressed) so they need growth, weight for age and performance.’’

“I concentrate on buying the best genetics and like the Herefords as they finish earlier,’’ Mr Weber said.

There was also a clear market signal buyers wanted European Union accredited cattle, with larger processors absent from the Wodonga markets where limited accredited pens were on offer.

Princess Royal Station, which is increasing its feedlot to 17,000 head, competed head to head with restockers over the few EU heifer pens on offer.

Elders Albury auctioneer Brett Shea said there was a spike in prices for joinable age heifers, pre-empting what could arise at this week’s special female sales.

Mr Shea said the lighter end of the Hereford steers tracked side-by-side with the Angus pens at Wodonga.

“It comes back to backgrounders working to a dollar per head value as opposed to a weight – if the cattle are fresh and presentable, they have room to move on them,’’ he said.

“There is certainly room for more of our vendors to become EU accredited and at the day, if we can see a premium, we need to drive that as agents to encourage our self-replacing herds to look at EU accreditation.’’