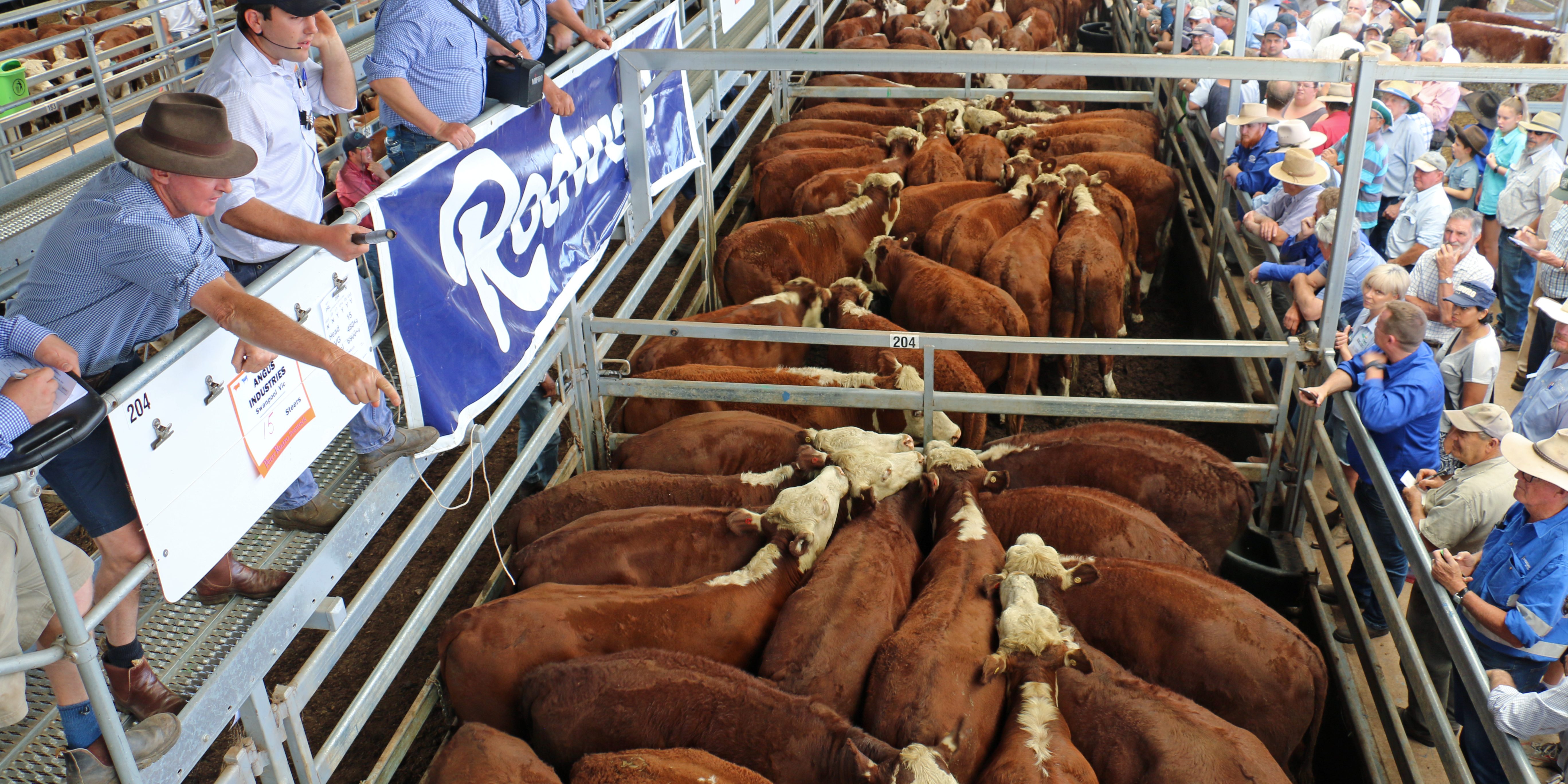 Bidding stepped up a notch at the Wodonga Blue Ribbon Weaner sale as buyers paid to $1275 for autumn drop Hereford steers.

All categories across the board were stronger on the previous day’s sale at Wodonga, with the exception of the lighter end of the heifer and steer weaners.

Teys Australia’s Jindalee feedlot appreciated the heavy grown Hereford and Black Baldy cattle yarded, with pens over 350kg making $990-$1420 or 259-312c/kg – a rise of 2c/kg on the previous day.

There were few European Union cattle on offer, keeping some of the larger buyers away.

G.L Prichard, Castle Creek, rang the bell in the grown heavy steers with a pen of 14-15 month old Black Baldy steers, 473kg and EU accredited, topping at $1460 or 308c/kg to Teys Australia.

Laurie Bullen, Booroola manager, Avenel, was at Wodonga to meet the market with December weaned autumn drop calves.
“Our top pens of Herefords and roans made $1275 while the thirds made $1110 and $950 for the fourths,’’ he said.
“Bullock finisher Peter Adams, Staghorn Flat, bought the top pen of Herefords and also paid our top price last year.’’

It was an emotional day for Trevor Ralston, “Hollywood’’, Euroa, when his pen of 47 autumn drop steers won the Herefords Australia champion pen.
The February/March drop steers, Morganvale and Kanimbla blood, weighed 383kg and sold to Jeff Cooper Agencies, Corryong, for $1265 or 330c/kg.
Trevor dedicated the win to his father and passionate Hereford breeder, Neil Ralston, who died last year.
“Neil had been coming to this sale for 15 years,’’ he said.
Trevor offered 82 steers and 45 heifers at Wodonga.
“Overall, I’m happy with the prices – this sale has firmed up quite a bit,’’ he said.
“Herefords are quite placid cattle, they grow out well and rear wonderful calves.’’

Topping the sale on a cents per kilogram basis was David Trethowan, Cookardinia, with a pen of 44 Hereford steers, 283kg, and making 353c/kg or $1000.
Mr Trethowan also claimed the top price in the Black Baldy steers of 351c/kg with calves weighing 293kg.

In the grown heifers, A Fraser, Yackandandah, topped the sale with Herefords weighing 457kg and making $1190 or 260c/kg to commission buyer Duncan Brown.

T & L Norman, Rutherglen, sold the top priced Hereford heifers on a cents per kilogram at 314c/kg or $760 for an EU accredited pen weighing 242kg.

He had sold the tops of the draft two months before to a backgrounder.
“I have memories of receiving $1500 a steer not that long ago – last year was fantastic but if we average $1000 a head we will be doing pretty well,’’ Mr Trewin said.
“Last year’s record prices took the stress out of life, enabled me to buy good quality bulls and fertiliser, and do pasture improvements.
“We were not frugal with the money and put it back into our cattle and properties.’’
Mr Trewin said buyers were consistently paying 300c/kg this year.
“There is a floor in the price and vendors are getting a bit extra for the quality and presentation of their animals.’’

The Murtagh family, of Mudgegonga, were pleased to see their May-June drop Black Baldy heifers sell to Rob Gill, Alexander Downs, Merriwa, for $940 or 307c/kg.
“I’m a realist and had been expecting $820-$830,’’ Adrian Murtagh said.
“At these rates we are nearly equal to last year’s prices – the calves are a lot fresher and have a bit more weight this year.’’

Among the few restockers in the heifers was Paul Rogers, Centennial Herefords, Holbrook, picking up 37 Booroola Hereford and Shorthorn-Hereford heifer weaners for $870-$890.

Rob Gill, Merriwa, was buying heifers with shape and length for backgrounding and grain feeding for 60-70 days at the family’s Alexander Downs feedlot. He turns off 300 head a week through the feedlot for the Alexander Downs branded programs.
“The market is where we thought it would be and it depends on the weather as to what happens,’’ Mr Gill said.
“I was looking for 260-280kg steers and heifers, and paying around 305-310c/kg.’’

Albury commission buyer Graeme Ward bought heifers for the Ogilvie family’s feedlot in South Australia.
“Black Baldy cattle were heading north and there was quite a bit of local competition,’’ Mr Ward said.
“The Hereford cattle perform well for Ogilvie’s – the backgrounding cattle bought today are averaging 280-285kg.’’
Brian Unthank Rural auctioneer Michael Unthank said heavier weaners sold beyond expectations at 320-330c/kg.
“We had a good run of heavy steers and surprisingly they made from 300c/kg to 315c/kg for the better end,’’ Mr Unthank said.
“Everyone had a few orders to buy lighter steers at $900-$1000, making them hard to come by.’’
Mr Unthank said feeder demand resulted in a solid result of 280-300c/kg for heifers.
“Overall, the sale was firm on our Angus sale last week.’’ 5. Shad Bailey, Colin Say & Co director, Glen Innes, was among the northern contingent of buyers to travel to Wodonga. Shad was fresh from buying a big run of Hereford steers at the western district sales for 295-321c/kg. 6. Buyers and vendors crowd the walk way at Wodonga to see the 3773 head sell at the Blue Ribbon Weaner Sale. 9. It was an emotional win in the Herefords Australia champion pen for Trevor Ralston, Euroa. He said the win honoured his late father, Neil, a passionate Hereford breeder who died last year. The pen of 47 February/March drop steers, Morganvale and Kanimbla blood, weighed 383kg and sold for $1265 or 330c/kg to Jeff Cooper Agencies, Corryong. 11. Glenda Murtagh, with her brother Adrian Murtagh, and Allan Ricketts, all of Mudgegonga, were pleased to receive $940 or 307c/kg for Black Baldy heifer weaners and $830 or 299c/kg for the purebred portion.