The project has received 50 per cent co-operative funding over an initial three-year period from the Meat and Livestock Australia Donor Company.

Dr Ball said the results were published this month from a similar trial carried out in the US.

He said the US trial had revealed the Hereford breed was broadly competitive on all traits.

“There are some hard objectified, well analysed, directly comparable results to look at,’’ Dr Ball said.

“We aim to link these trials in 2017 so the Hereford community across the world has data that shows exactly how competitive we can be.’’

The US trial involved the Angus herds of Simplot Livestock Co, Lacey Land and Livestock, Harris Ranch and Circle A Angus.

The Harris Ranch findings revealed the crossbred calves had a US$78 a head advantage compared to their straightbred peers.

There was a slight advantage to the crossbred of US$10.80 a head for increased weaning weight, but most of it came through feedlot and carcass performance.

The Hereford sired group had an advantage in average daily weight gain, dry matter feed conversion and cost of gain compared to the Angus sired group.

She runs a commercial herd of 200 Hereford, Black Baldy and Bos indicus cross females at Backmede, near Casino, supplying weaners into the local physical markets.

Jennifer said the heterosis (hybrid vigour) of the Black Baldy had resulted in a huge difference at the saleyards.

“This helped keep me afloat during the cattle crash,’’ she said.

“I challenge those around here that prefer Bos indicus (which I also have some of), as the Black Baldies consistently make more money than the heavier Bos indicus,’’ she said.

Jennifer said the fertility of Hereford females was a real advantage.

“Hereford cows will be back in calf three months after her latest calf, with many going back into calf before then,’’ she said.

“The second biggest plus for Herefords is they are the best cross for all other breeds and their docility.
“The southern areas of the Victoria and Riverina can’t get enough of the Black Baldies I can turn out in July.’’

She has regular repeat buyers looking for her Black Baldies.

“In this climate, cows can be calving all year round and with tactical grazing management, I can keep the freshness in my sale vealers in the winter/early spring months.

“My Black Baldy cows that I have kept are excellent mothers and rear my heaviest Bos taurus calves, and are also very fertile.’’

Jennifer said Hereford and Angus were complementary breeds, along with Santa Gertrudis and Hereford.

“My agent always comments on my high calving rates – I have achieved 100 per cent of Black Baldy calves from Hereford cows and this year had a 99 per cent rate.

“I don’t have my cows on supplementary feed – they eat just what’s in the paddock.’’

Mr Nivison said producers not crossbreeding were leaving 20-25 per cent of production on the table.

“Depending on how many maternal benefits you include in your heterosis, you gain a minimum of 10 per cent in a two way breed split,’’ Mr Nivison said.

“When the feeder steer price is 350c/kg liveweight, the purebred producer needs a price premium of 35c/kg to break even with the Black Baldy producer.’’ 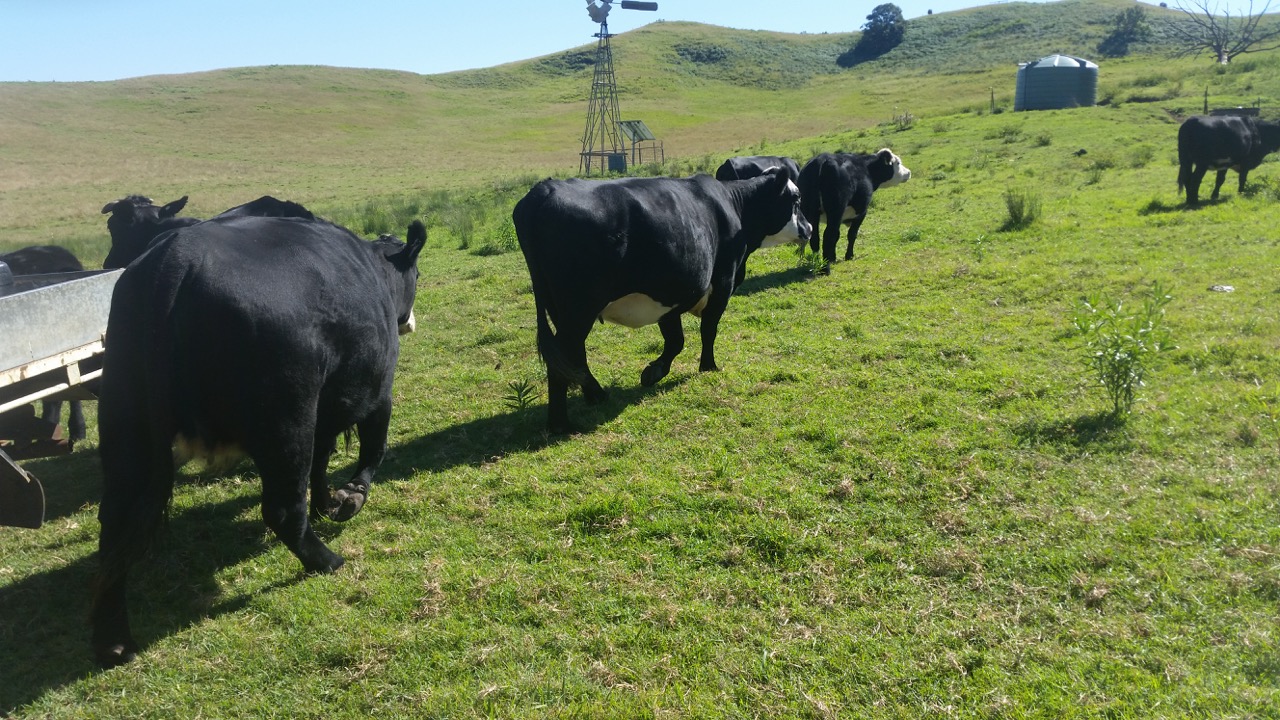