Opportunity for New and Young Breeders to Experience Herefords

An opportunity to experience the Hereford breed, ranging from products and information to feeding, animal selection and a seedstock auction, will be held in the Sydney basin next month.

The Sydney Regional Hereford Group will hold the Hereford Experience Day on Saturday, November 5, from 10am, at Elm Vale, 531 Old South Road, Mittagong.

Mr Sutherland said many small lot or peri-urban farmers were interested in Herefords for their quiet temperament and ability to finish on grass.

“This day will be ideal for new breeders, juniors and hobby farmers who want to run a few cows and need information to help them along,’’ he said.

“We are expecting to draw interested people from Sydney, Goulburn, Maitland, Bathurst, Braidwood and Bungendore.

“A drawcard at the auction will be 2016 Melbourne Royal Show supreme Hereford exhibit Talis Twilight L962, selling as Lot 1.’’

Industry professionals, including an agronomist, will speak on topics such as animal selection to suit the target market, animal structure, husbandry, and feeding to suit the environment.

A Helmsmann auction sale starts at 1pm, with 30 female and four bulls catalogued.

The sale lots are broken and unbroken and a mix of paddock reared, shown and show potential animals.

Visitors will be able to browse the trade stands on the day courtesy of Bowral Co-op, Castlereagh Stockfeeds, Herefords Australia and International Animal Health Products.

A barbecue lunch and refreshments will be available on the day, with catering by Buxton Rural Fire Service.

Mr Sutherland said the group had held auctions in the past, with many follow-up inquiries from people who had bought stock.

“People, particularly youth and schools, are always looking for show females and this is a good opportunity to get stud females out there,’’ he said.

“As a group, we used to run a youth training expo and support Sydney Royal Show as our local Royal.

“My interest in cattle started in high school where we had Limousin, Murray Grey, Shorthorn and Hereford cattle.

“Out of all of those, I chose Hereford as they were quiet to break-in, lead and show plus they had the carcass eating quality.’’

A sale catalogue will be available on-line at www.sydneyregionalherefords.com

For more information on the Hereford Experience Day contact Jason Sutherland on 0417 498 980. 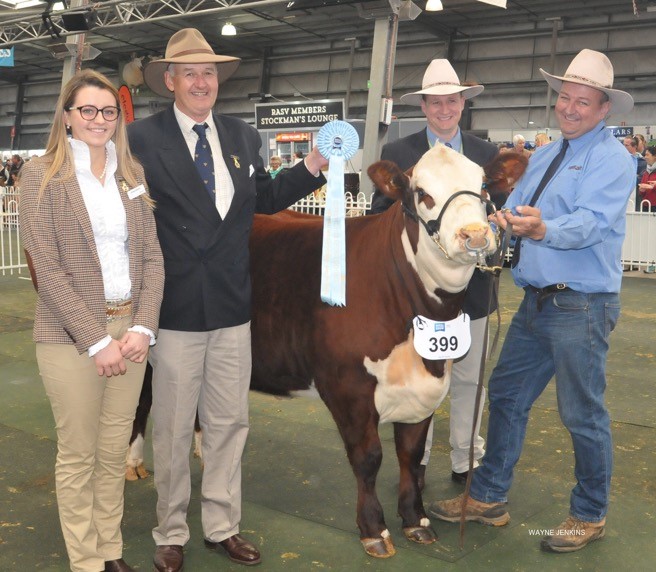 Talis Twilight L962, the supreme Hereford exhibit at the 2016 Melbourne Royal, will be offered as Lot 1 at the Hereford Experience Day next month.