The Herefords Australia Youth Ambassador program is an initiative designed to engage the next generation of cattle enthusiasts.

They receive an embroidered jacket and $500 towards travel costs.

The Ambassador of the Year will receive $1000 towards their future career in the agricultural industry.

Herefords Australia Youth president Brandon Sykes said the ambassadors were passionate about the breed and its improvement.

“I look forward to the ideas and projects they will share during their term as ambassadors,’’ Mr Sykes said.

Emily Rabone, 18, of Gatton, Qld, was named as the 2015-2016 Queensland Ambassador and is secretary of the Herefords Australia Northern NSW Youth Group.

As a young girl, Emily had been encouraged to learn cattle handling skills from her mother Kathy Rabone and aunt Julie Nixon, and established her own Creewah Cattle Co.

She works as a customer support officer for Practical Systems in Armidale and is organising the National Heifer Show in January at Inverell.

Emily plans to work with Hereford breeders in Canada in November, and build upon the idea of a youth exchange developed by Brandon Sykes during a recent visit to Canada.

“I would like to organise a youth forum at either the Dubbo or Wodonga Nationals – it is important for youth to have a voice on industry issues,’’ she said.

“Junior members will be those serving on the board in 20 years time so it is critical senior members provide support and listen to what they have to say.’’

Sarah Day, 20, is from Bordertown, SA, and is studying a Bachelor of Agriculture and Business at the University of New England, Armidale.

Sarah has been showing cattle since she was 10, enjoying the connections, friendships and opportunities made.

“I definitely want a career in the cattle industry and am looking at work experience options,’’ she said.

“I plan to promote the Hereford breed in a positive way to youth who are not necessarily involved in the cattle industry by building on what has already been achieved in social media.

“It is important to keep youth involved in the breed’s challenges and changes.’’

Taylah-Rae Robinson, 21, of Mt Taylor, Vic, is a liveweight operator at the Bairnsdale Livestock Exchange, working with producers, buyers, agents and processors.

Her family ran commercial Hereford cattle at Bairnsdale and she has enjoyed the friendships made during her involvement with Herefords Australia Youth.

Taylah-Rae is moving into a new job with Bill Wyndham & Co at Bairnsdale and plans to organise field days to introduce more youth to the breed.

William Vivers, 20, of Inverell, works on the family farm, which runs 350 stud and commercial breeders.

As president of the Northern NSW Youth Group, Will is organising the National Heifer Show at Inverell and also volunteered at the Hereford site at AgQuip.

He plans to organise a field day to promote the breed to youth in northern NSW and an exchange between youth in remote regions to open opportunities during his term as an ambassador.

The 23-year-old works on a commercial beef and sheep operation at Uralla, and runs 30 Poll Hereford breeders under the stud prefix Eathorpe.

He has a strong outlet for bulls into Angus herds on the New England for Black Baldy progeny.

“My aim is to get more youth involved and to promote the breed, especially on the Black Baldy side,’’ Oliver said.

“I would like to organise a Black Baldy information day – I run 20 Black Baldy cows myself as a trial.

“The Hereford adds more weight gain, doing ability and temperament, and the cents per kilogram doesn’t change from the black to the Black baldy. 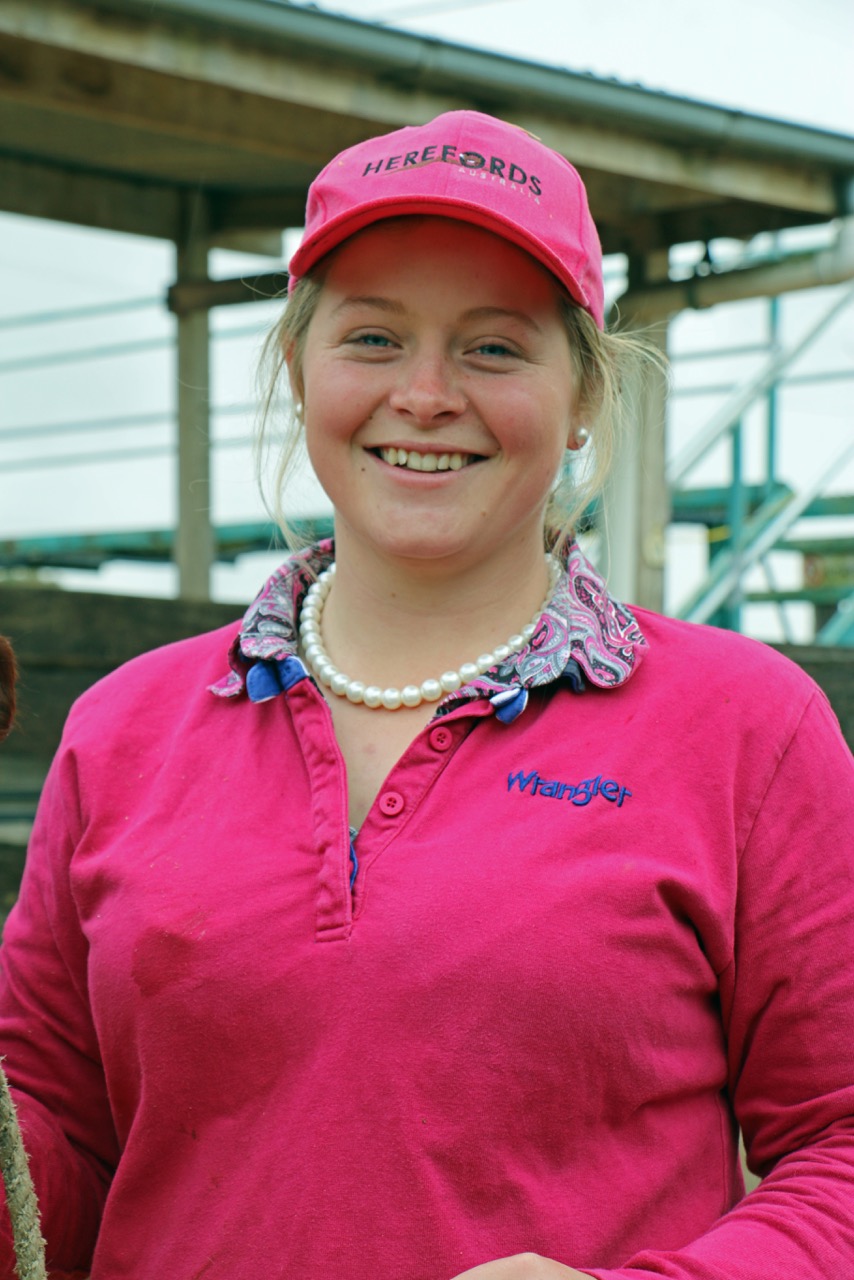 Emily Rabone has been named as one of five Herefords Australia Youth Ambassadors for 2016-17.