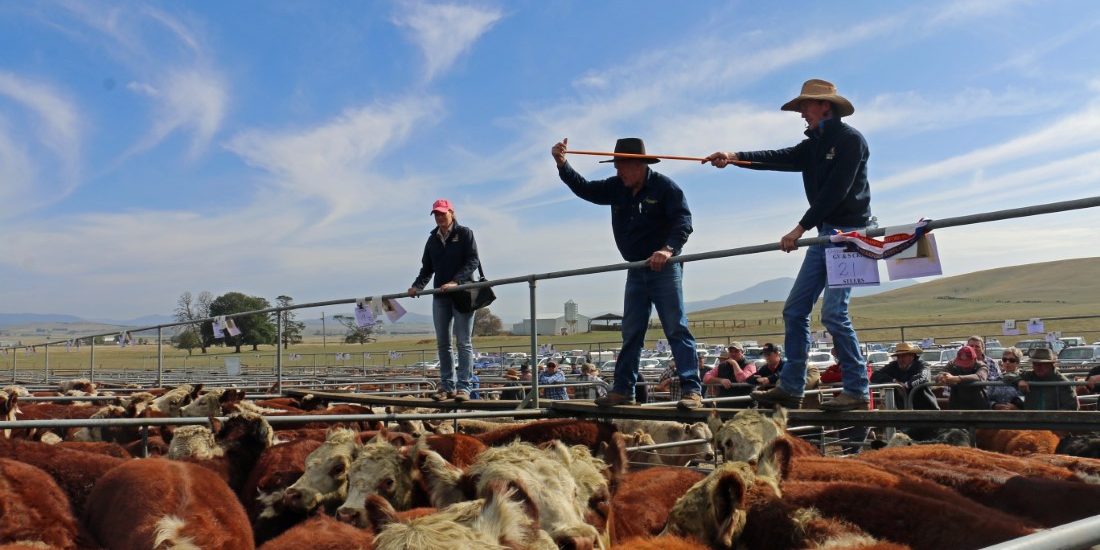 For buyers it was a case of throw away the calculator and for vendors just enjoy the ride as prices pushed into unchartered territory for whiteface weaners of 650c/kg at the Benambra Calf Sale.

Victorian, NSW and South Australian steer finishers and lot feeders converged on the Victorian high country on Tuesday to bid to $1710 for whiteface cattle at the 80th anniversary circuit opener.

For steer finishers who recently made a $1000 profit on steers they picked up at last year’s sale, the squeeze was on as prices soared to historic highs for the vendor bred offering.

But the smiles couldn’t be wiped off vendor’s faces after enduring years of drought and recent bushfires, with their averages lifting by $300 on last year.

“It was great to see the Hereford cattle fly their flag and be out in front again in the whole area,” Mr Fullgrabe said.

“When we turned the corner, those Coonamble, Gunnedah and Tamworth buyers got into lines of cattle – there will be a big taxi fare on them to get out of this area.

“Previously we had to know our two times table but now it is five times table.”

The champion pen made $1480 to Alex Scott & Staff, Warragul, and was estimated to return 360c/kg.

Mr Crisp attributed the win to his friend, “Sparra” Walker who had encouraged him to sell at Hinnomunjie.

Mr Betts said depending on the season, he takes cattle through to finish for JBS or Greenham’s Never Ever program.

He likes how Herefords are suited to the high country and prove their toughness in the harsh winters.

Mr Betts has retained the tops of his steers for finishing over the winter.

“I had expected the heavier cattle to be chasing 400c/kg today,” he said.

Buyer Alan Mitchell had just weaned 300 calves and is experiencing an “unbelievable season”.

Topping the run of autumn drop Hereford weaners was Peter Soutter, Benambra, with a pen of 19 selling for $1500 to Benambra steer finisher Paul Pendergast.

Mr Pendergast had sold in January the steers he paid the top price of $1030 at last year’s sale to average $2000 and with an average carcase weight of 370kg.

“The sale was much better than I expected – I didn’t know when to pull out. The ducks lined up for the vendors today,” he said.

In the females, Donald Betts topped the sale with spring drop Shorthorn/Hereford heifers, Yarram Park and Karoonda blood, 453kg, at $1430 or 315c/kg.

The lighter end of the steer weaners topped at an estimated 650c/kg with the middle run of the lighter end making 570c/kg and the 250kg steers averaging 500c/kg.

Louis and Sharon Pendergast, Benambra, offered 500 steers and heifers across three sales of the circuit.

“It is a buoyant market and had lifted 100c/kg in the past week – I had been hoping for 400c/kg plus,” Mr Pendergast said.

“We certainly can’t complain about the prices. In 2012 I averaged $900 for 600 calves but I’ve never seen prices like this here. 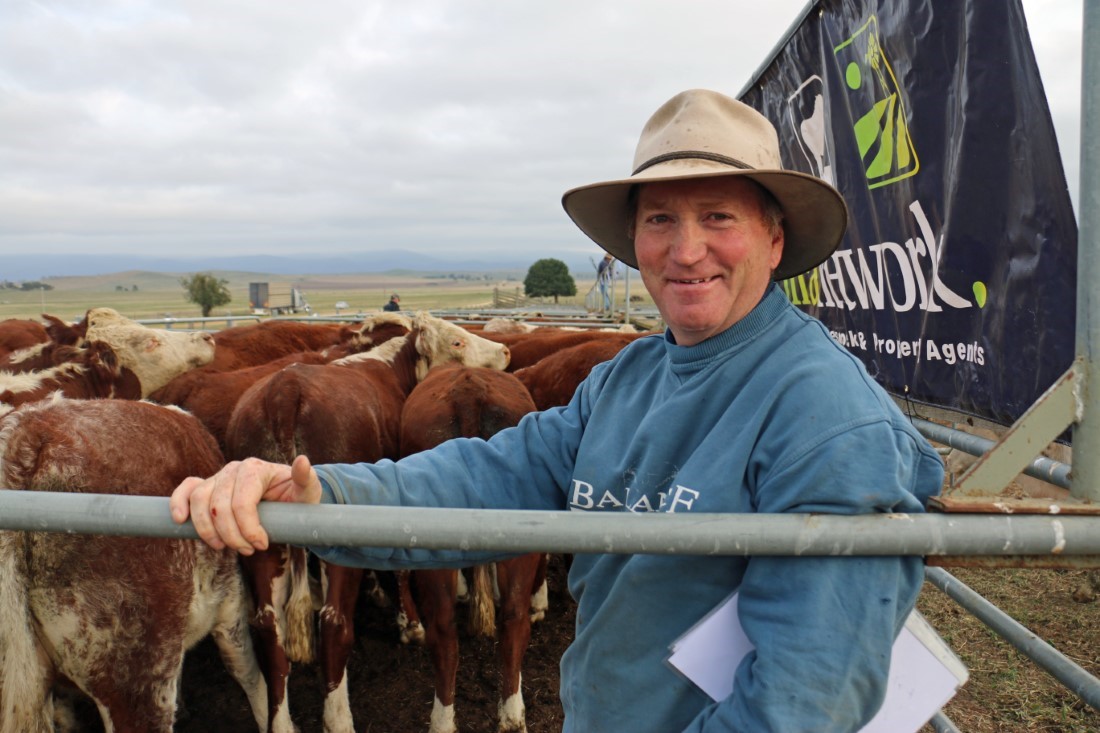 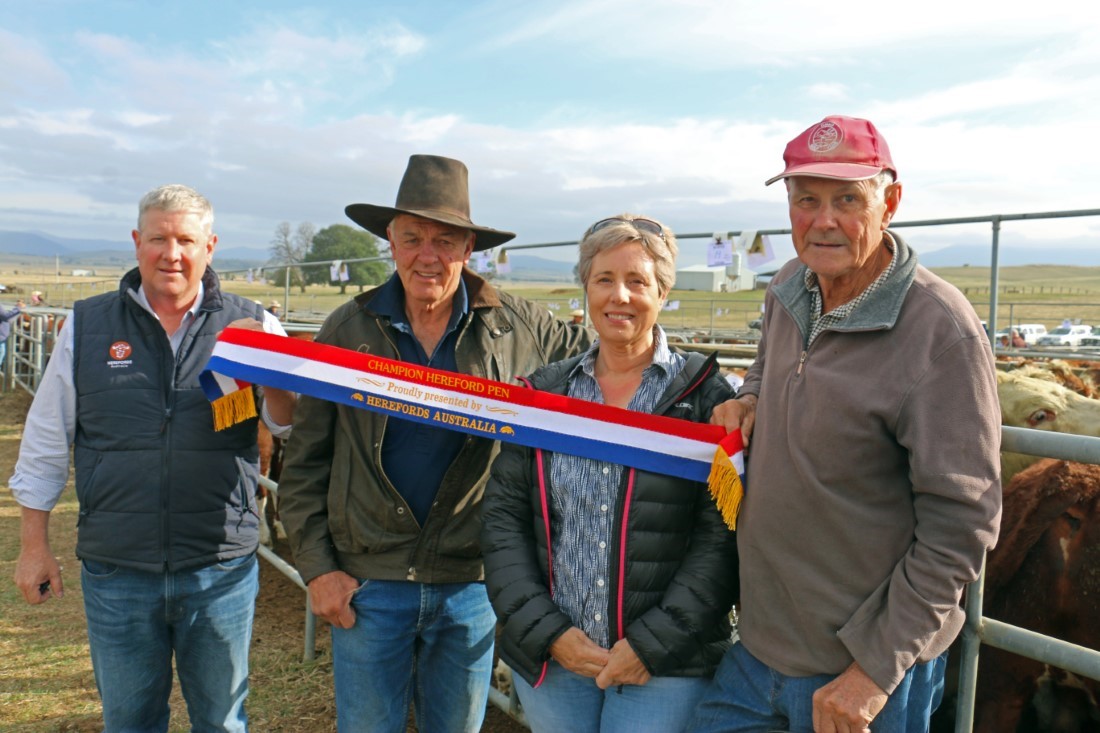 Jim Pendergast and Herefords Australia’s Michael Beattie, Armidale. Jim Pendergast host the Benambra Calf Sale on his Hinnomunjie property and is changing his operation from breeding stock to steers only. 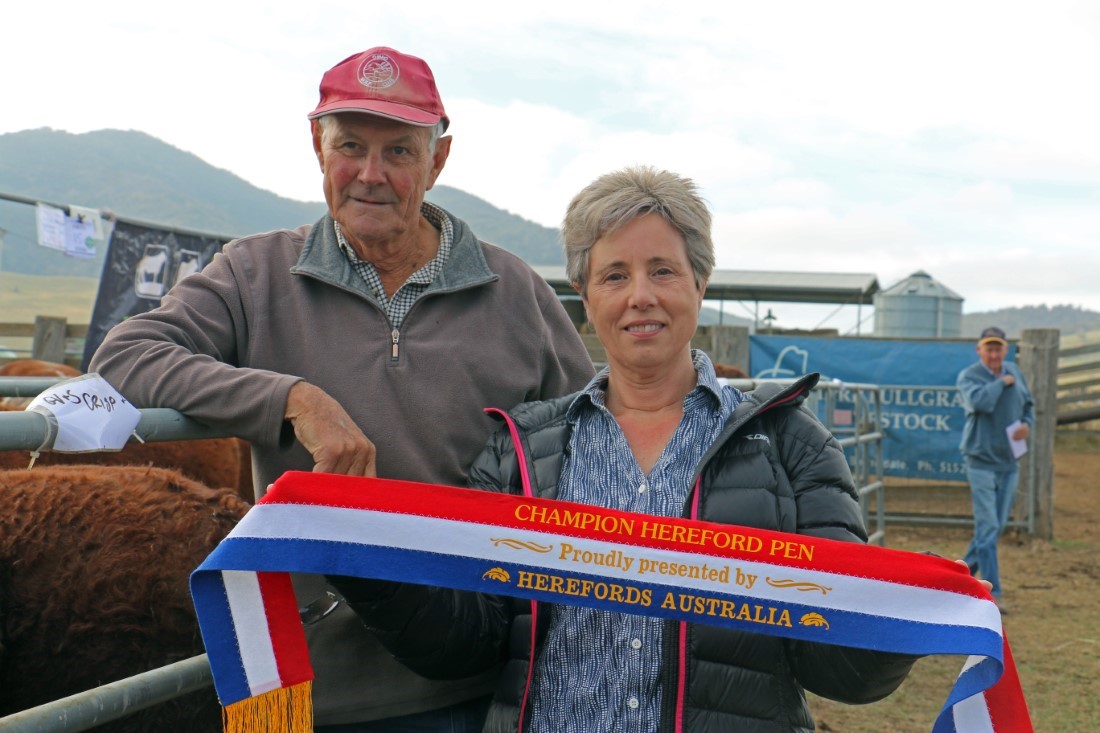 Gus and Sandra Crisp, Omeo, were first time vendors at the sale and won champion pen. 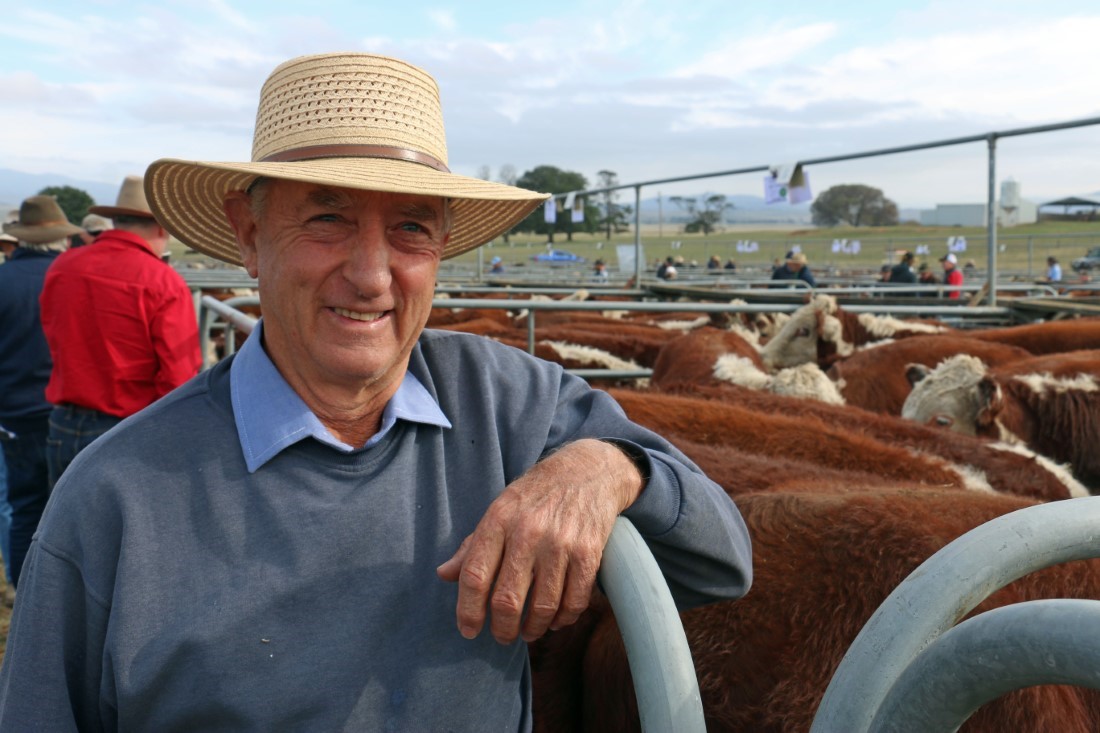 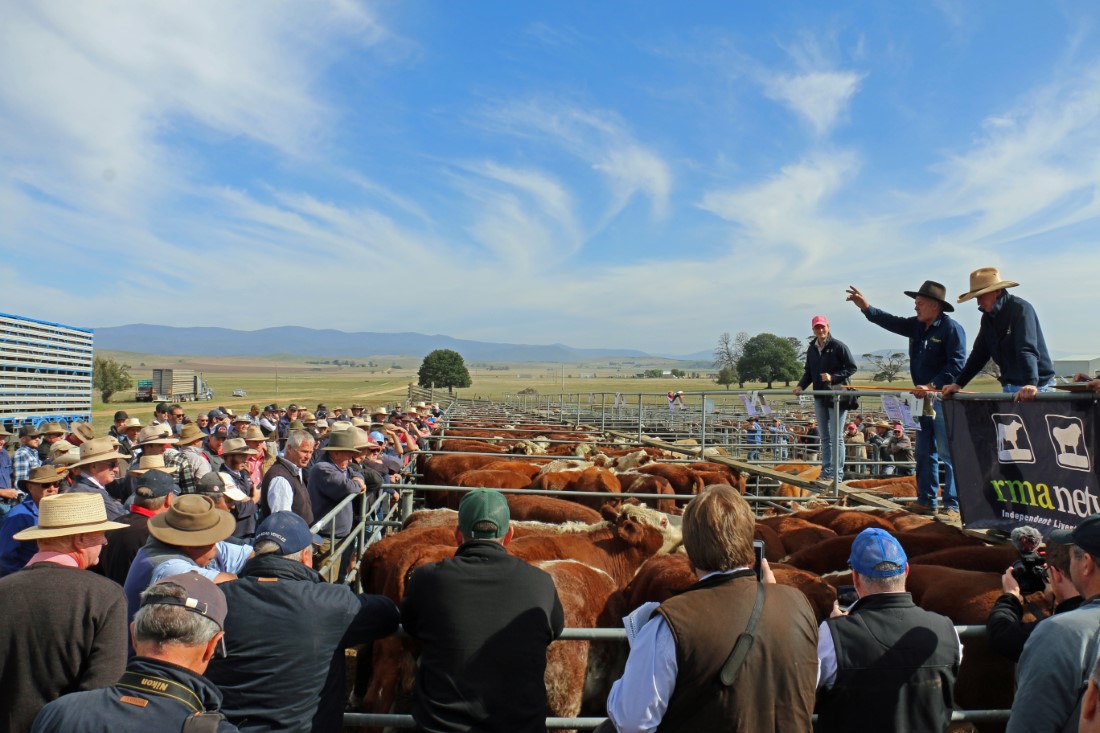 The opening pen of Shorthorn-Hereford steers sell for a record $1710 at the Benambra Calf Sale. 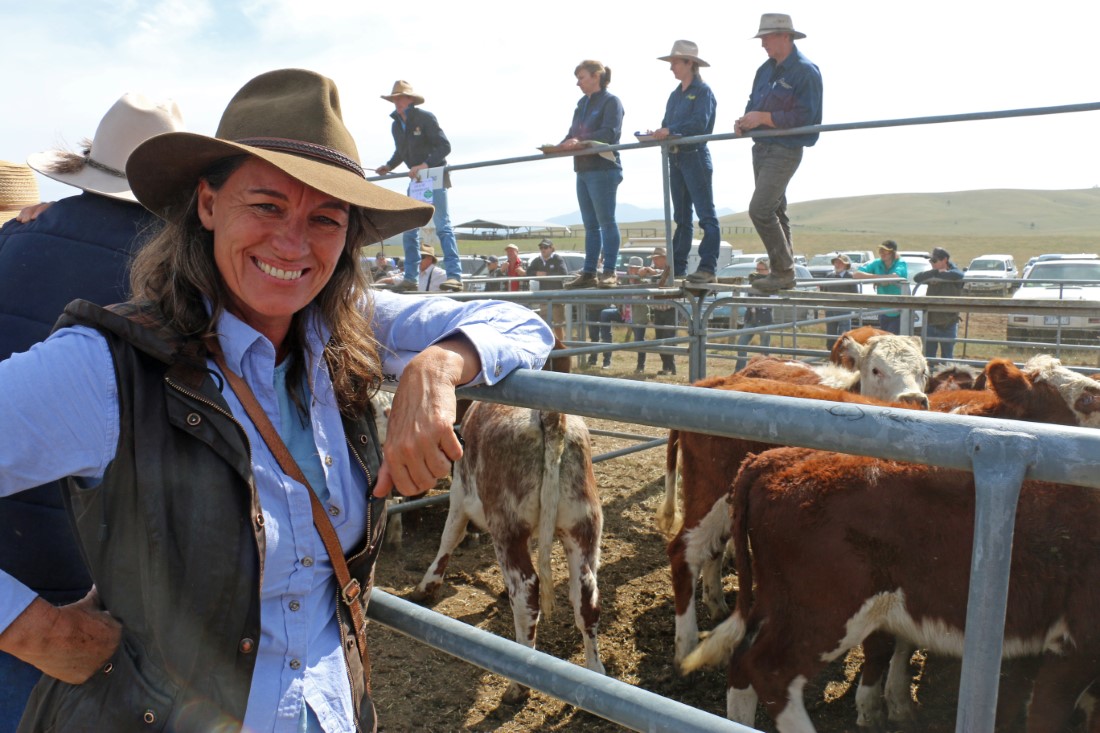 Sonia Buckley, Benambra, returned to cattle after a 20 year break and snapped up these heifers for $990. 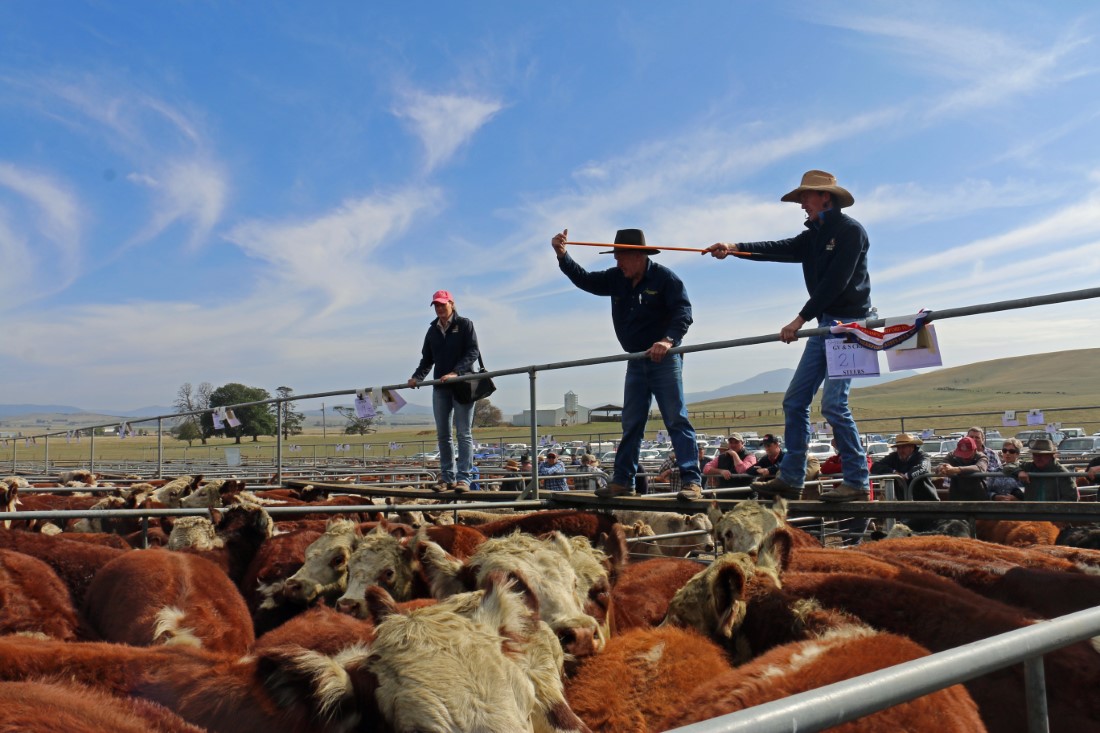 Bids fly as the champion pen sells for $1480 to Scotts, Warragul.