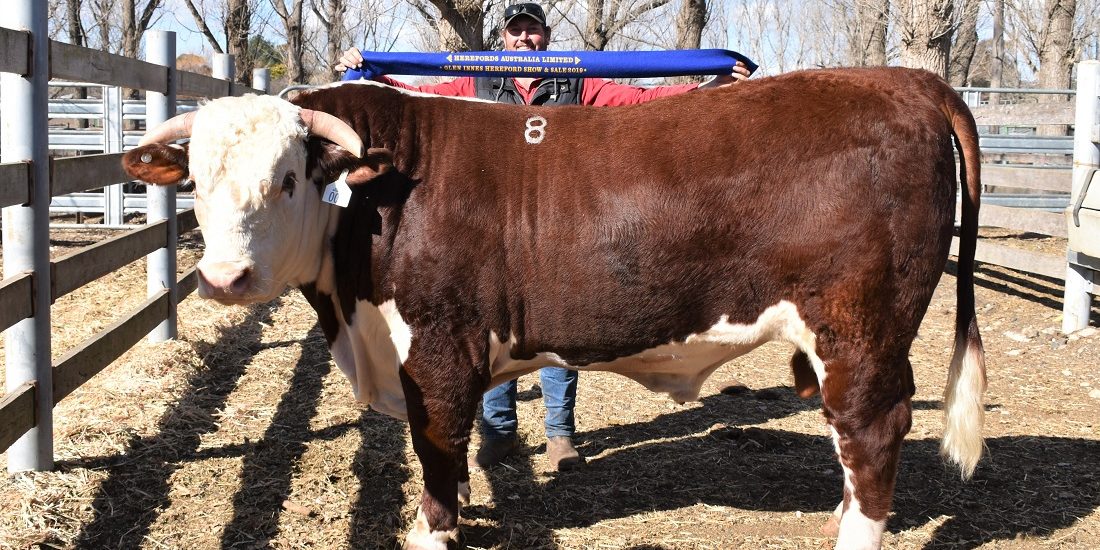 The 74th annual Glen Innes Bull Show and Sale got off to a flying start with the judging of 85 quality Hereford and Poll Hereford bulls on Thursday afternoon.

Grand champion on the day was awarded to the first-place junior bull, Kylandee Nerong, exhibited by Phil and Brad Thomas of Kylandee Herefords, Inverell.

This is the third year in a row that Kylandee have taken home the grand champion sash from Glen Innes.

Sired by Courallie J F051 Jackhammer, Nerong weighed in at 1020kg and scanned with a raw EMA of 132sqcm, rib fat of 12mm, rump fat of 18mm and a scrotal circumference of 44cm.

“I really appreciated his growth for age, he’s very balanced with thickness through the top line and a fantastic hindquarter.

“He has a big EMA and is very stylish,” Mr Davies said.

In the intermediate class the first-place ribbon was awarded to Valley View No Way N023, exhibited by first time entrant Paul Durkin of Warrialda.

Mr Davies described No Way as being very well balanced and correct, with a very good top line and a beautiful hindquarter.

Second place in the intermediate individual class was awarded to Eathorpe Nyngan N043, exhibited by the Jeffery family of Eathorpe Poll Herefords.

Supple Naked scanned with the highest raw EMA of the catalogue at 140sqcm, with rib and rump fats of 12mm and 18mm respectively, and a scrotal circumference of 40cm.

“He’s the bull with the greatest amount of capacity in this class,

In the prestigious pen of three classes the champion sash was awarded to the first placed junior team of three, exhibited by Courallie J Herefords.

Mr Davies described the team as a very even line-up of bulls that were consistent with all the commercial characteristics he was looking for.

“[These bulls are] very industry relevant and very consistent with fantastic top lines.

In the senior division, the first-place pen of three was awarded to the Scurr family’s team, consisting of Tahlan National N052, Tahlan Naiades N051 and Tahlan Navigator N034.

Once again Mr Davies admired the consistency of the bulls as well as their sound structure.

“These bulls are very consistent with a moderate maturity pattern.

Second place in the senior pen of three was awarded to the Kylandee team which comprised of Kylandee Nobby, Kylandee North Star and Kylandee Nimbin.

The final class of the day was the truckload of six bulls, which was won by the Supple Whiteface team.

The consistency and the capacity of the six Supple bulls is what earnt them the champion sash from the judge.

“They were the most consistent line of bulls here today, with ample growth for age, thickness and the doability that Herefords a renowned for,” Mr Davies said.

Mr Davies congratulated all vendors for the excellent presentation of their cattle and commended them for the time and effort they had put into their bulls in such a trying season. 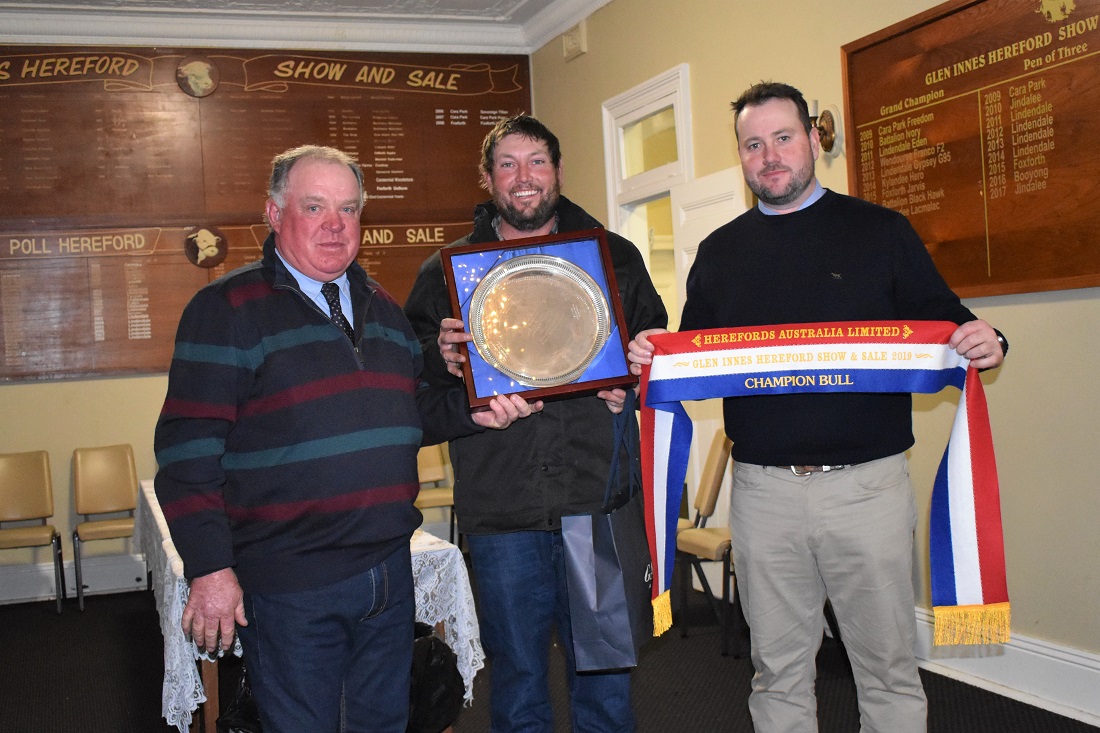 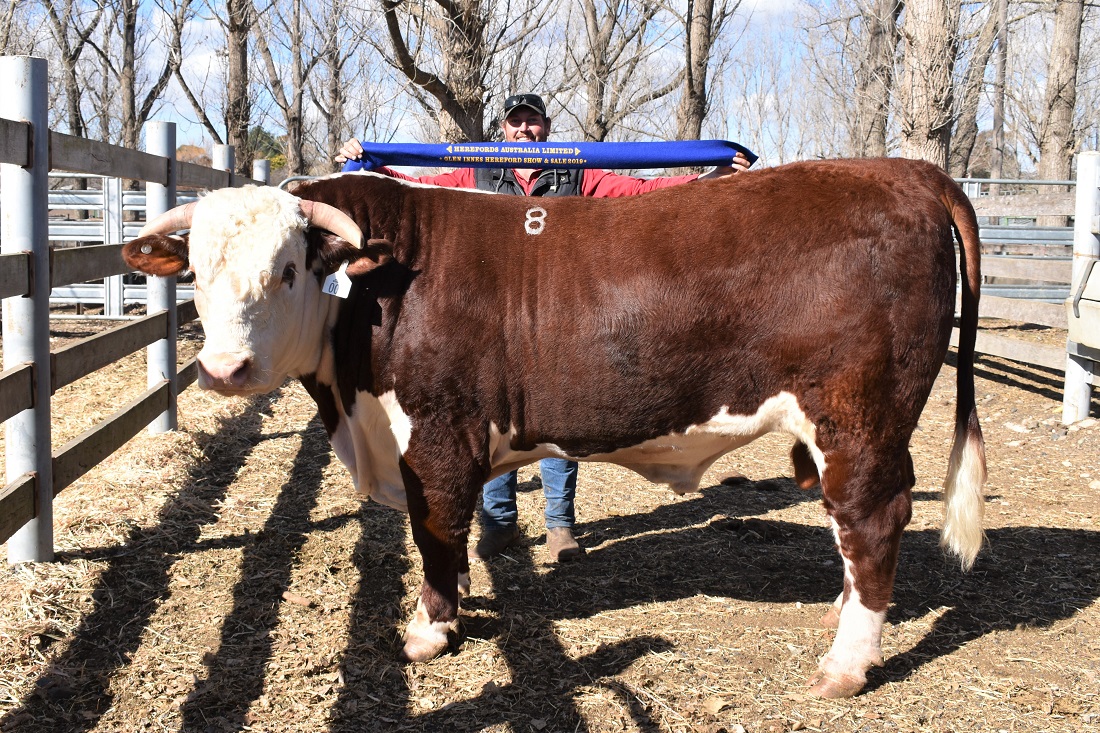 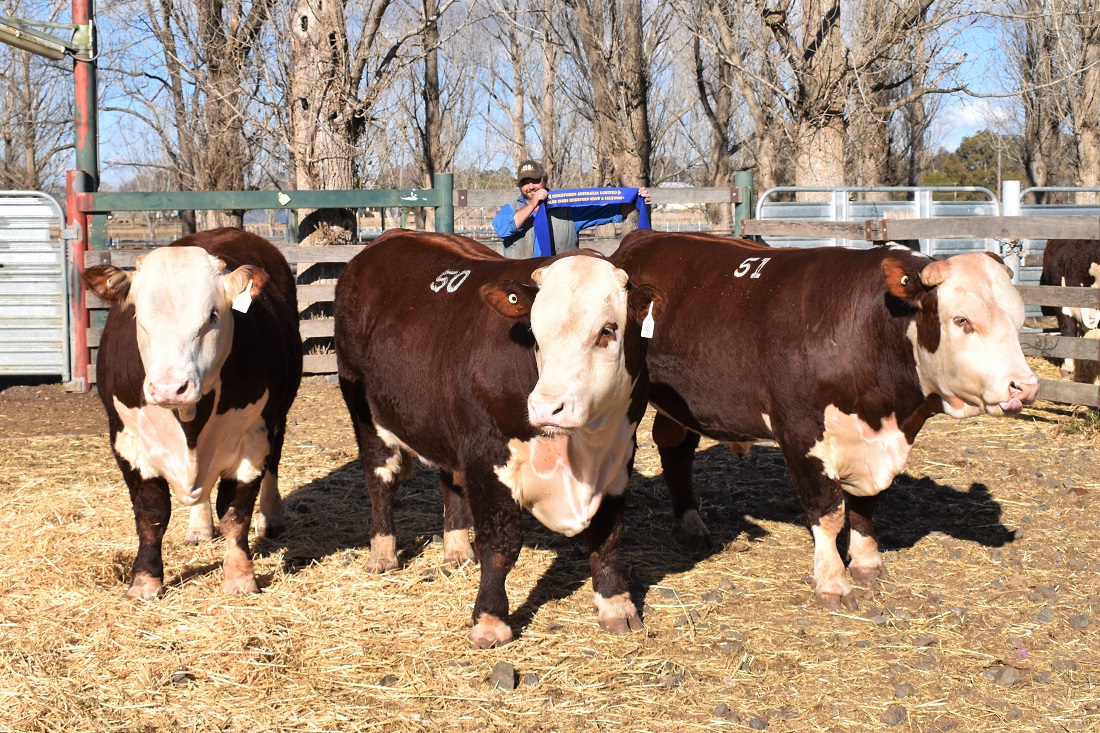 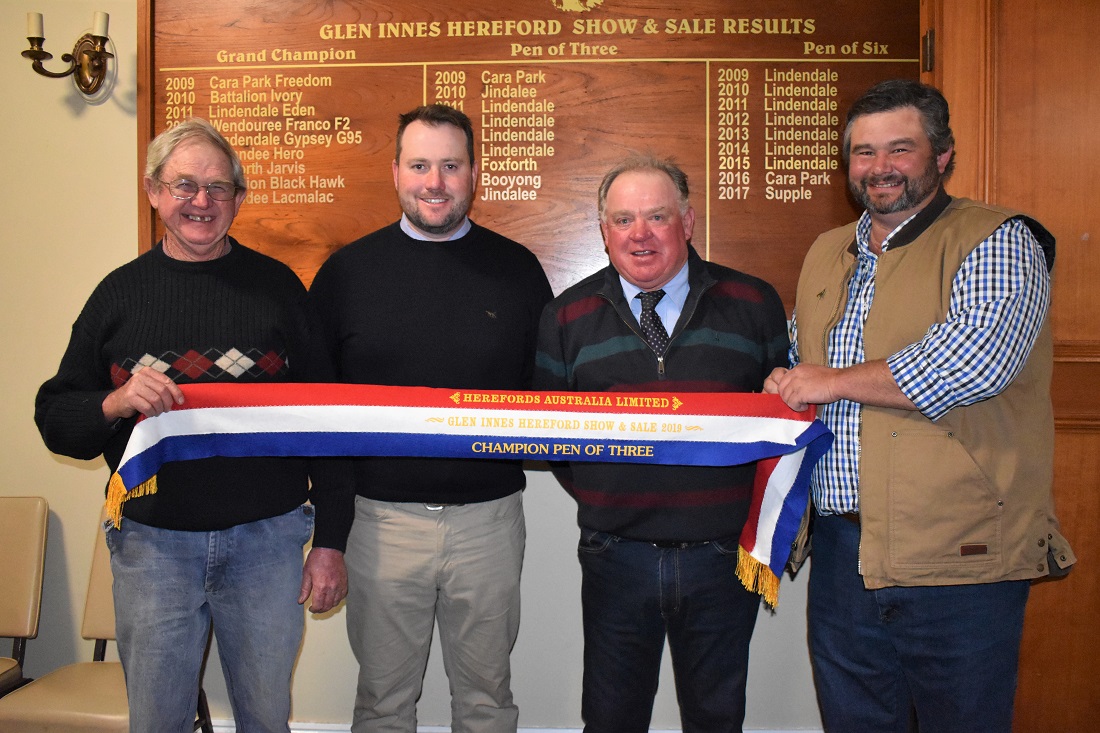 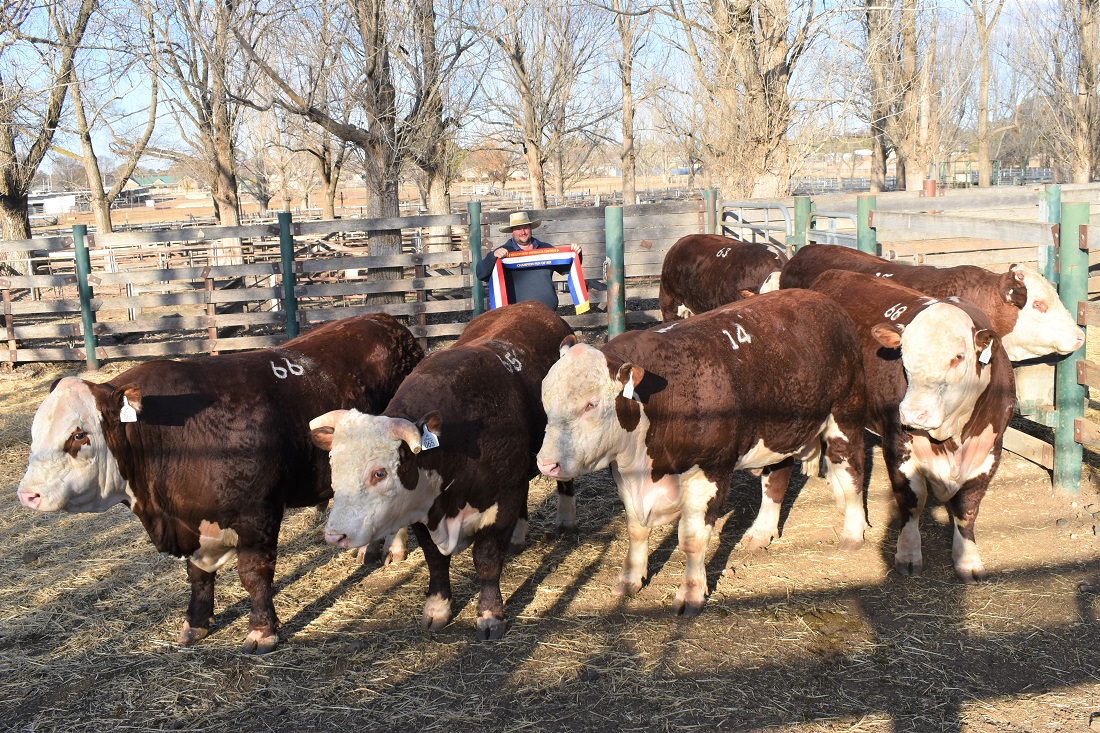 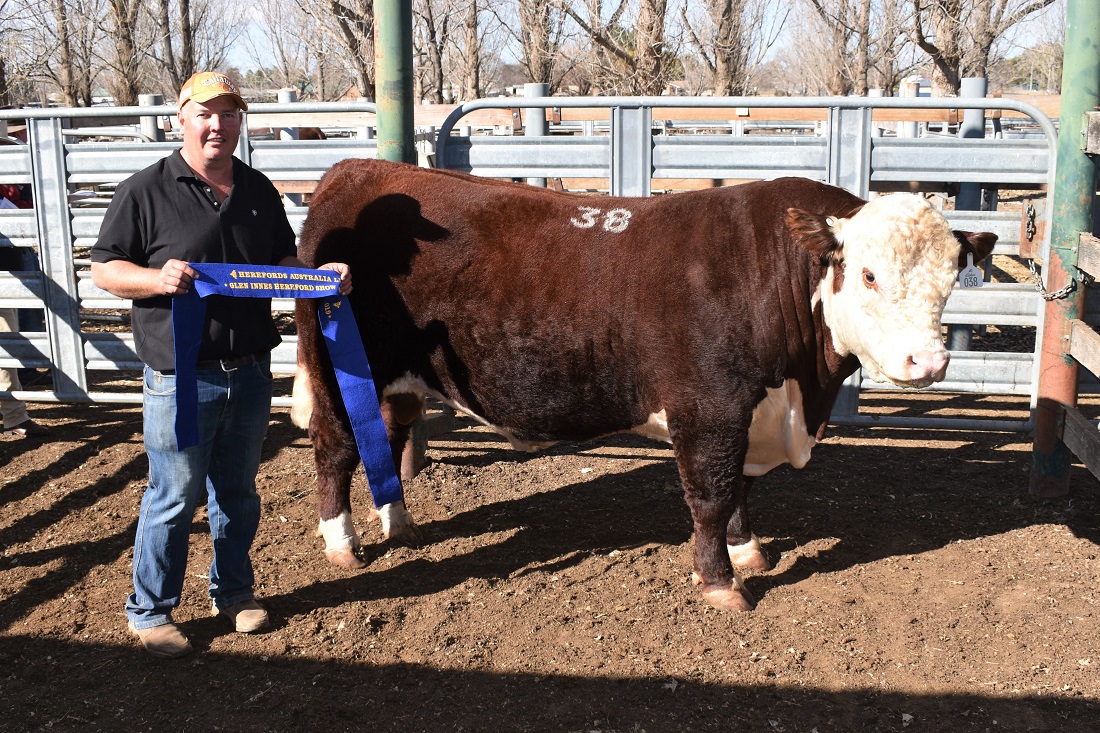 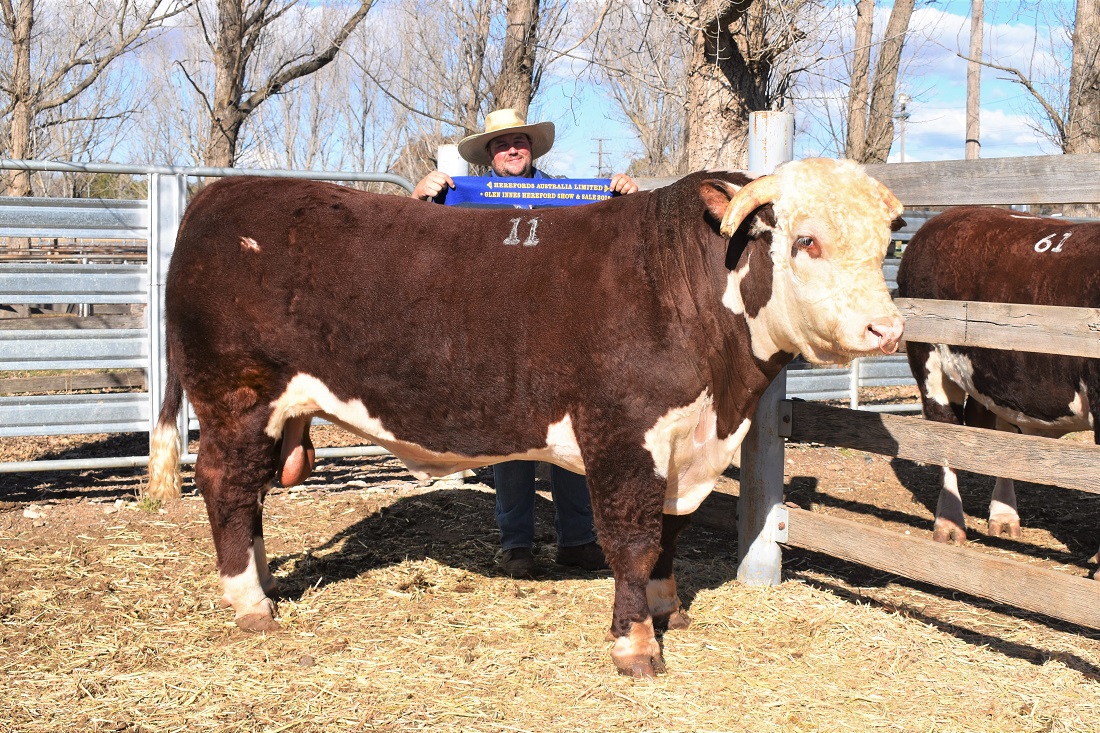 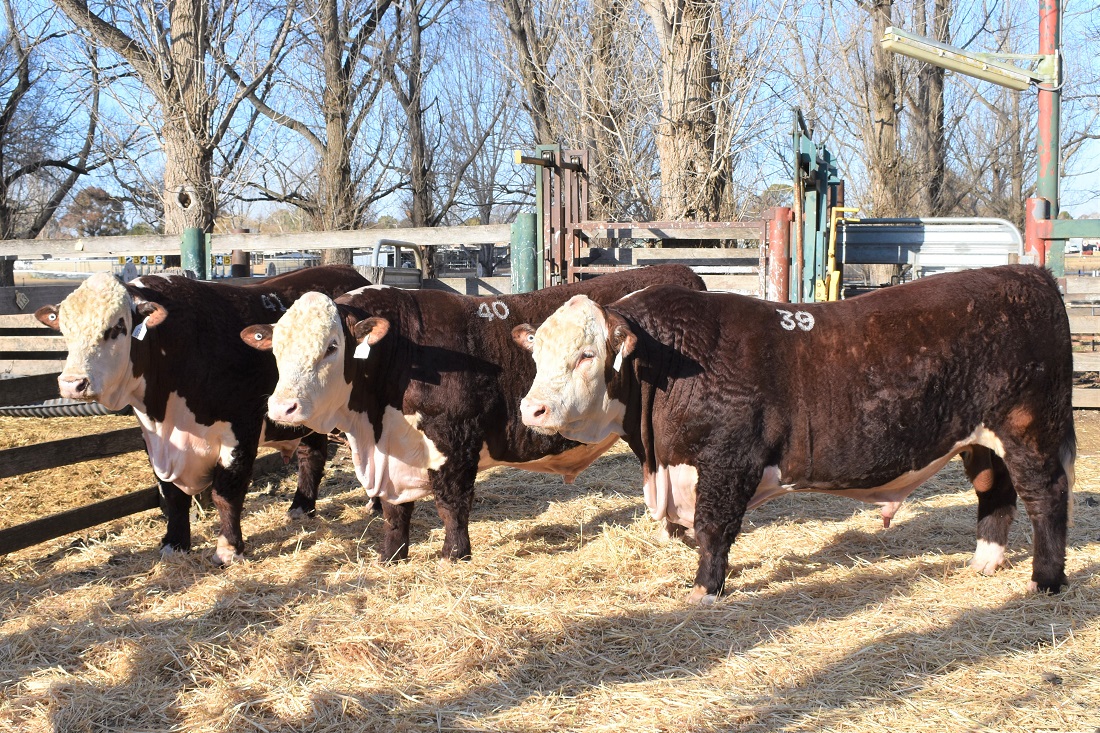