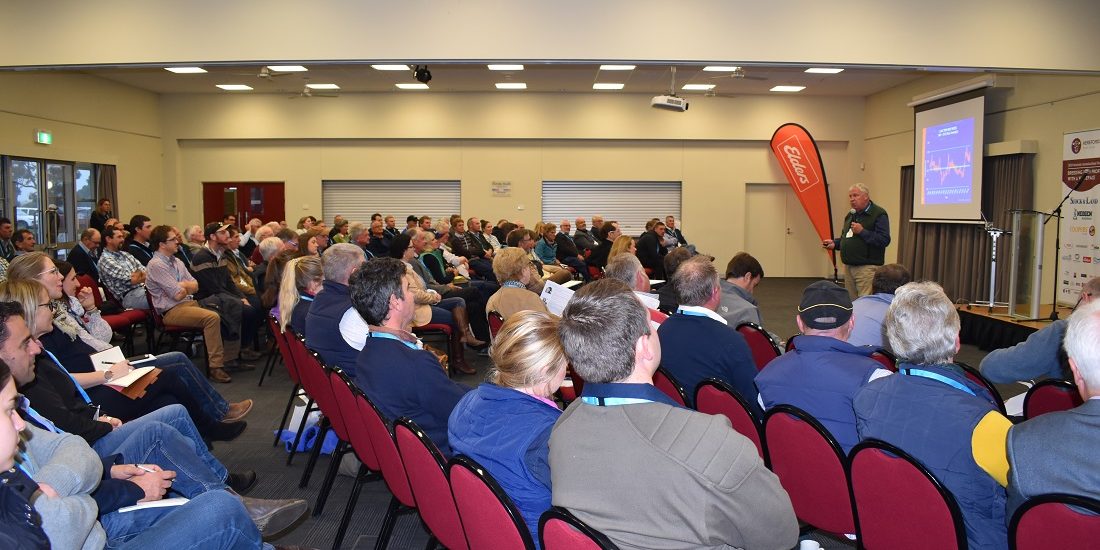 The 2019 Herefords Australia Breed Forum wrapped up in Hamilton on Wednesday this week with over 140 Hereford enthusiasts having attended from across Australia.

The forum had something for everyone with 14 different presentations from a world class line up of guest speakers.

David Johnston of AGBU discussed the development of new Hereford $Index values and the power of genomics in Single Step Breedplan EBVs.

Feed costs and net feed intake (NFI) were identified in David’s presentation as important traits to measure in the development of the new $Indexes as well as mature cow weight.

Rob Banks, also of AGBU spoke on the state of the Hereford breed and where it is heading.

The importance of utilising new technology to make greater genetic progress was a focus of Rob’s presentation, which reiterated the importance of using genomics to increase the accuracy of traditional EBVs as discussed by David Johnston.

The preliminary results of the Herefords Australia Black Baldy Trial were presented by Wayne Pitchford of the University of Adelaide and focussed on the value of Hereford genetics in commercial crossbreeding operations.

The new ultra-low-density test will be a lower priced option that will enable producers to submit female genomic data into Breedplan and increase the EBV accuracy of their entire herd.

While enjoying a first-class beef eating experience, diners were also kept entertained by a light-hearted but informative presentation by Enoch Bergman, titled: “Proud to Produce Protein.”

The presentation offered an informed response to those opposed to consuming animal-based proteins by demonstrating a range of environmental and animal welfare benefits to producing livestock animals.

Wednesday morning kicked off with the industry breakfast where Jason Strong, Managing Director of Meat and Livestock Australia (MLA) discussed consumer interests and how we as producers need to tell our story better.

The keynote speaker for the 2019 forum was Jack Ward, Executive Vice President of the American Hereford Association.

Mr Ward discussed the importance of Herefords in commercial beef herds in the USA with particular emphasis on black baldies and cross breeding.

“What we need to do is take advantage of what we’ve got and make sure every Angus cow sees a Hereford bull,” Mr Ward said.

Mr Ward also pointed out that it was important that breeders were producing bulls with the right genetics for the commercial producer.

Mr Holmes identified the temperament and structural soundness of Hereford bulls as a major selling point for the breed as Hereford bulls tend to last longer, therefore resulting in a lower dollar-per-head price per calf weaned.

Michael Crowley of MLA delivered a presentation on the emerging technologies for measuring meat quality and how the use of automation and robotics in meat processing is leading to higher yields.

From a processor’s perspective, Mark Inglis of JBS discussed the challenges faced by red meat processors, particularly the rising costs associated with meat processing and the need for greater transparency up and down the chain.

Lachy Strohfeldt of Bell Veterinary discussed the importance of weaning acclimation and the range of health benefits proper weaning can bring, particularly if cattle end up in a feedlot environment.

One of the primary causes of feedlot health problems is stress, which can be caused by several things including confinement anxiety and unfamiliarity with human contact.

According to Dr Strohfeldt, yard weaning and handling cattle from a young age are two main ways to avoid these stresses and change the health outcomes for cattle in feedlots.

However, pre-vaccination prior to sending cattle to feedlots is also an important practice that is proven to reduce feedlot morbidity and mortality.

Backgrounding cattle for at least one month prior to feedlot entry and managing comingling within the feedlot are two main ways to decrease the risk of BRD according to Dr Bergman.

The 2019 forum concluded with a speaker panel session in which members of the audience were able to ask the speakers any further questions about anything they had heard throughout the day.

Overall feedback from the forum was positive, with a range of interesting and relevant topics covered over the two days providing something of interest for everyone in attendance.