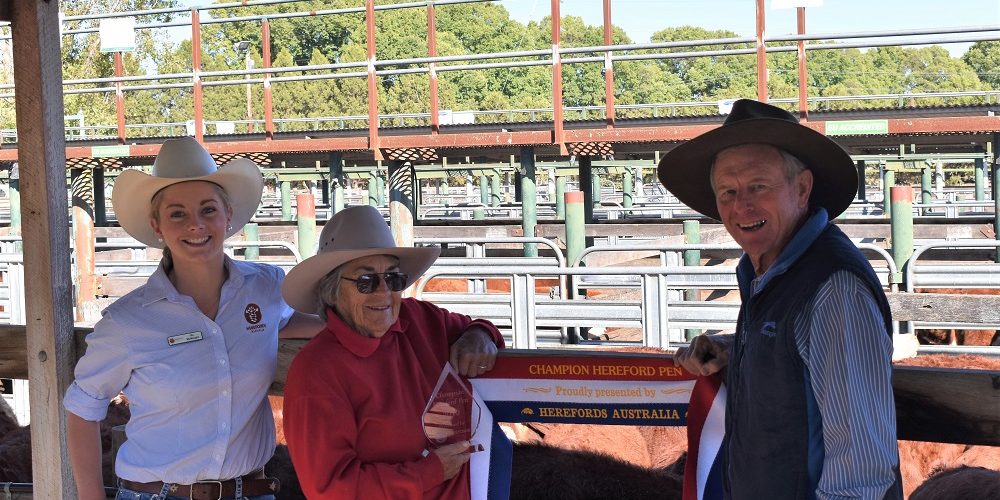 Prices were down due to the prolonged drought conditions which provided some good value opportunities for buyers.

Buying strength was predominantly back towards Inverell and back up north into Meandara and there was also some support from down at Albury.

Black baldy steers made a top of 266c/kg and two pens of Hereford/Santa cross steers made 219c/kg.

Hereford heifers had a top price of 177c/kg which was paid by Peter Stewart for a pen of 28 Cara Park and Lotus blood heifers offered by Peters parents’ Ross and Diana Stewart of Pipearange.

The heifers weighed an average of 246kg and had earlier been awarded the prize for champion pen of Hereford heifers.

Ross and Dianna were also awarded the sash for champion pen of Hereford steers at the sale.

Success ran in the family for the Stewarts on Friday, with Peter’s pen of 27 Hereford/Santa cross heifers being awarded champion crossbred pen and selling for the top heifer price of 242c/kg.

Peter sold 96 head of mixed sex, July drop Hereford/Santa cross weaners at the sale and purchased all the 60 Hereford heifers offered by Ross and Diana to add to his breeding program.

“We cross Hereford females to Santa bulls; the Hereford cows have a great temperament and the Hereford/Santa cross does well in tougher times.” Peter said.

Peter admitted that it was “a tough day” at the sale but he was happy with how his cattle sold.

Agent Terry te Velde quoted the top runs of the crossbred steers at $2.40 up to $2.70, and the lighter cattle dropped off in price which Mr te Velde said was consistent with the market in the last month.

The quality of the cattle yarded at the sale was quite good considering the season, however there was a big variation in weights depending on where the cattle had come from.

“Some top calves would be over 300kg where some of the smaller cattle would be around 170-180kg.” Mr te Velde said.

Early weaning was a contributing factor in some of the lighter weight cattle, as well as a shortage of feed and water in many areas.

“There’s a lot of calves that have battled away for the last two and a half months on the western side which has been dry.

“Many of these calves normally wouldn’t have been weaned but they have been this year.

“There’s a lot of producers that have just battled for feed and water, water’s as big of a problem as feed at the moment.” Mr te Velde said.

Buyer Will Cameron of Matheson picked up 76 head at the sale including 43 of Peter Stewart’s Hereford/Santa steers.

Mr Cameron said that he had sold a lot of his females and was replacing them with a few weaners to be grown out into domestic feeders.

“It was a tough day to be a vendor but there was good value to buy some quality lines of cattle.” Mr Cameron said.

Ross and Diana Stewart of Pipearange (11km west of Deepwater) said they had lightened their stocking rate a little this year and are planning on preg testing their females in order to not carry any cows that aren’t in calf.

“The aim of any breeding operation is to maintain the core herd through the drought, and we’ve still kept 25 heifers this year.” Mr Stewart said.

Mr Stewart agreed that the sale had been affected by the poor season, but people still needed to sell their cattle.

“The sale reflected the ongoing drought conditions, but the calves had to be sold.” Mr Stewart said. 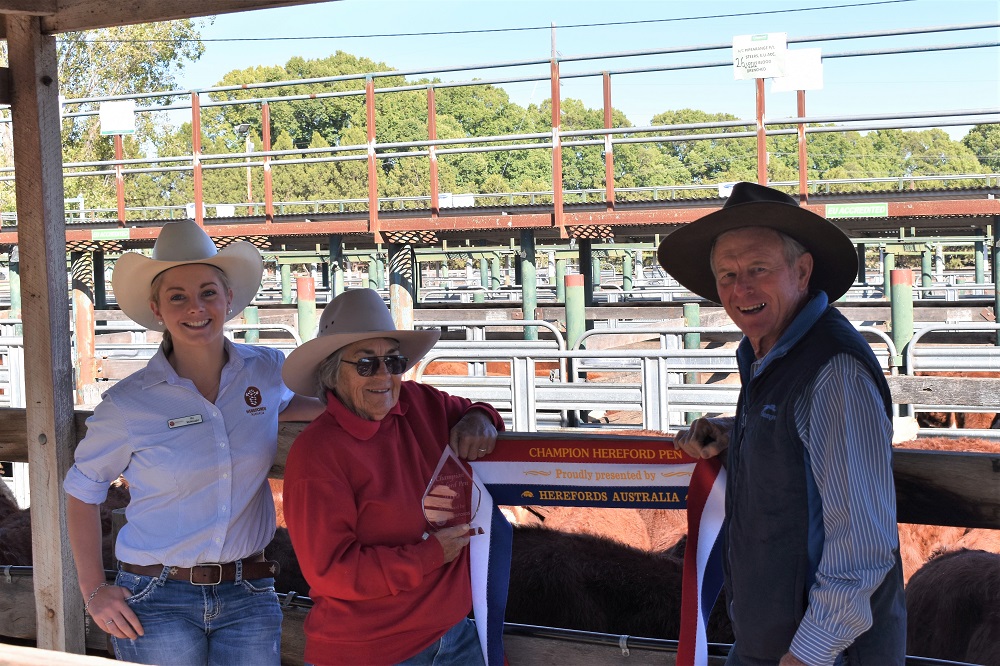 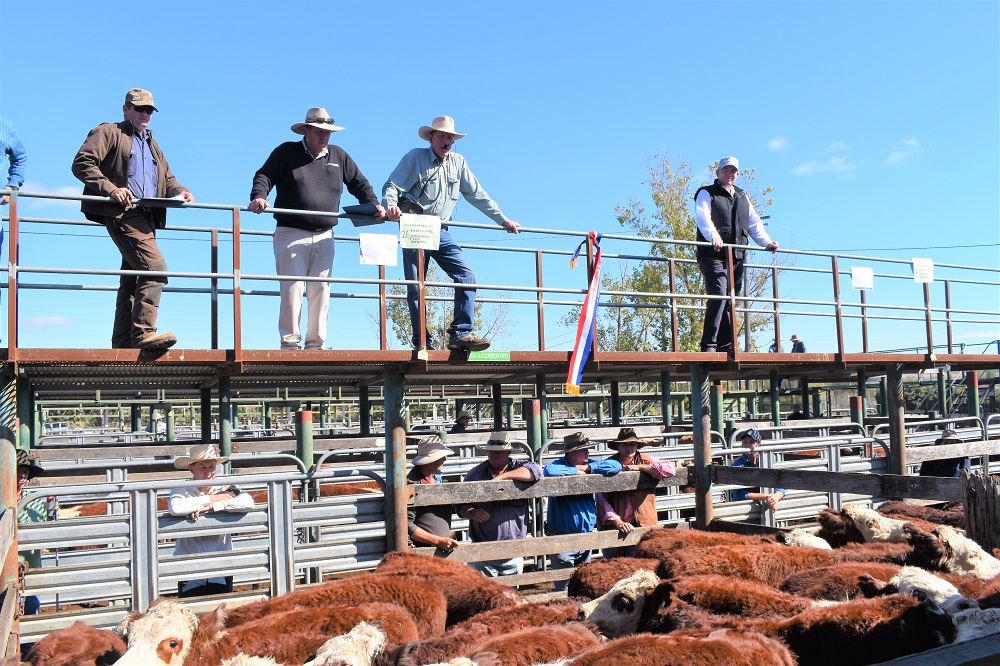 Landmark agent Brad Newsome opens up the bidding on the champion pen of Pipearange steers. 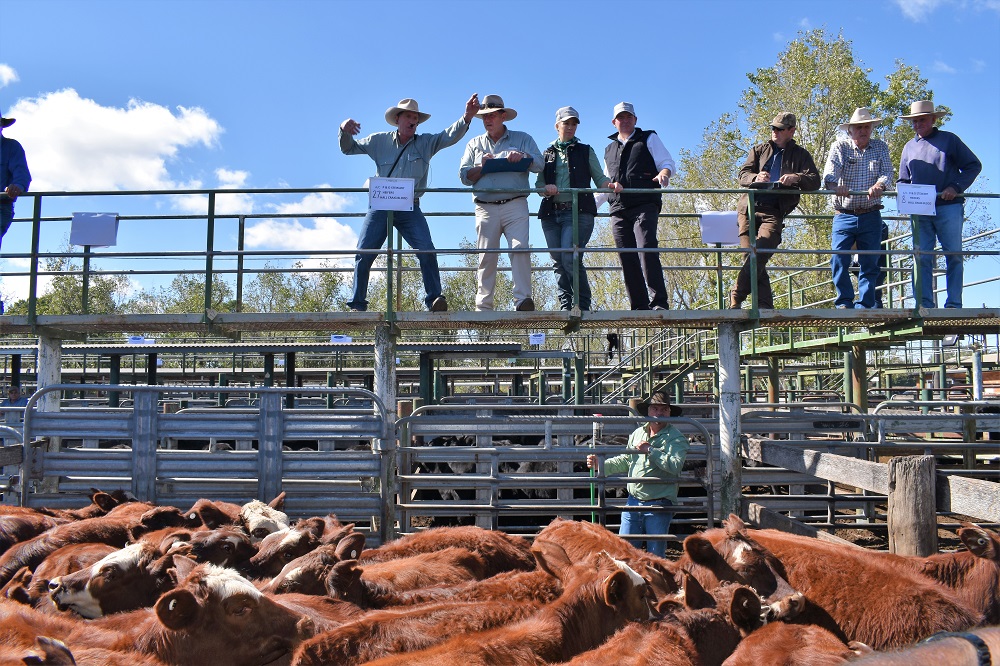