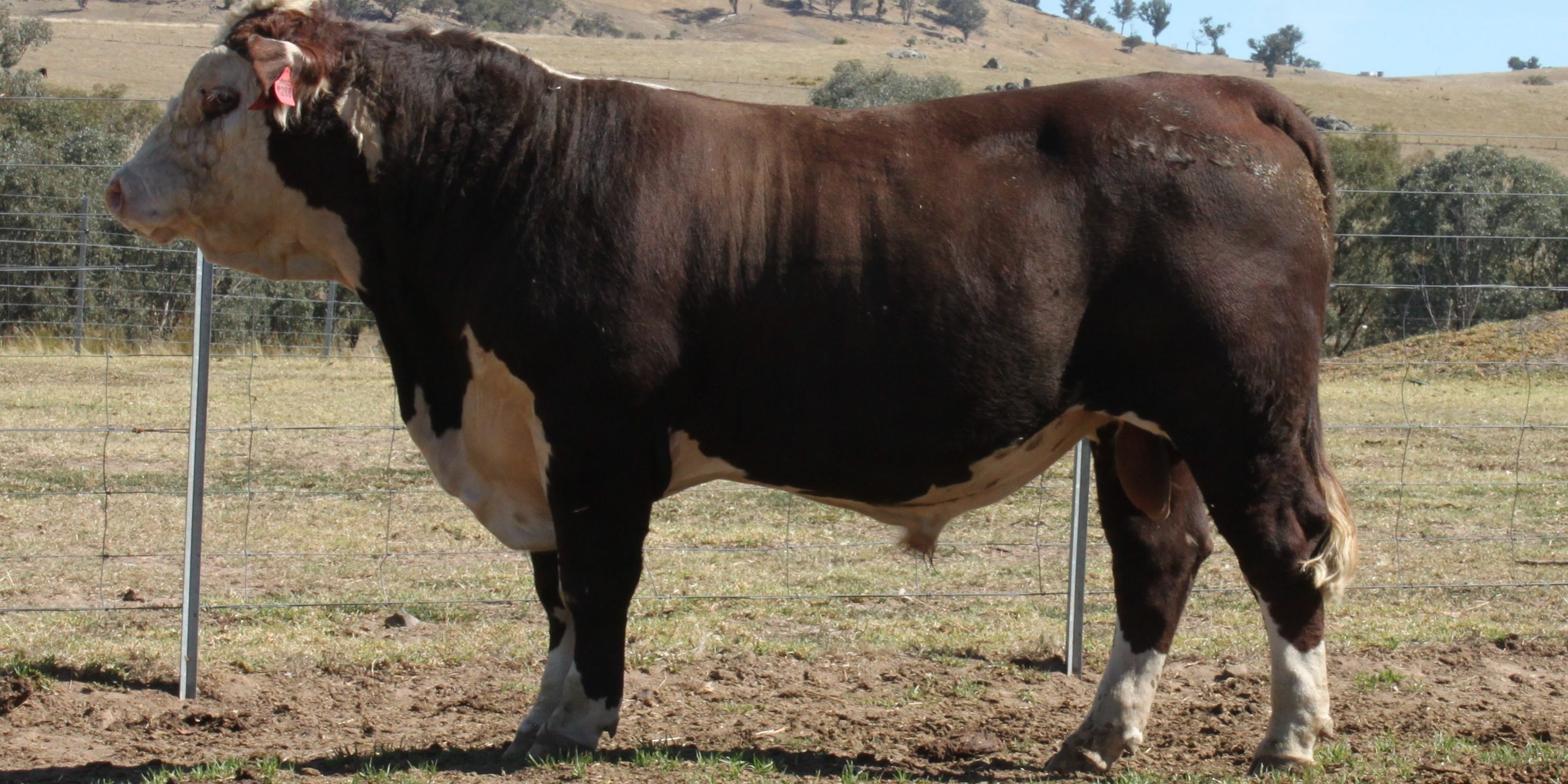 A Super Sires program launched by Herefords Australia is set to deliver high performance whiteface genetics to the cattle industry.

Intramuscular fat (IMF) has been identified as the initial focus, with elite AI sire, Wirruna Matty M288, selected as the first bull to be offered under the Super Sires program. Wirruna Matty is a polled bull bred by Ian and Diane Locke, Wirruna Poll Herefords, Holbrook, NSW. Sired by Allendale Anzac E114, the August 2016-drop bull is out of donor dam Wirruna Circle H13.

He said Super Sires formed part of the Herefords Australia strategic plan to increase the performance of Hereford cattle in both stud and commercial herds.

Mr Birchnell said Matty was a young sire selected for his intramuscular fat (IMF) impact, with a BREEDPLAN figure of +3.0 and supported by strong figures across all EBVs (estimated breeding values). Matty ranks in the top 1% of bulls in the breed for marbling and achieved the highest IMF percentage scan in his contemporary group. He is also in the top 1% of the Hereford breed for carcass weight, docility, and the Supermarket, Grassfed and EU Index’s.”

“In consultation with industry, Herefords Australia recognises the significant opportunities generated by increasing IMF in the breed.”

“When you look at where all the grass and short fed grain brands sit there is saturation around the marble score zero specifications.”

“If we collectively focus our breed to consistently produce meat with marble scores above 2, the future of Hereford cattle looks exciting.”

“The grass fed market when coupled with high marbling offers tremendous opportunity for Herefords to regain the mantle of the prominent breed in Australia.’’

Further expansion of the project is already planned with the identification of other elite Hereford bulls that will bring rapid genetic gain to commercial breeding programs.

“We are talking to commercial breeders out in the industry – we are designing them a solution to their problems, and that solution is Hereford genetics,’’ Mr Birchnell said.

Herefords Australia members are eligible to participate in the Supers Sires program, with access to competitively priced semen. Included in the cost of the semen is a unique Hereford True Genetics ear tag identifying livestock to potential purchasers as genetically high performing.

Herefords Australia General Manager Andrew Donoghue said the program provided an opportunity for the society to take a new and exciting value proposition to the industry, and engage with potential new members.

Mr Donoghue said the Super Sires program was not about single trait selection.

“Yes, the project focuses on bulls which are trait leaders. But it is imperative any bull we use in the program still possess balanced and desirable genetics for other traits,’’ he said. “As an example, Wirruna Matty sired 23 calves born to registered heifers at Wirruna this spring – the calves had an average birthweight of 33.5kg.

The inclusion of Wirruna Matty M288 as the inaugural sire in the program has been co-ordinated with ABS Australia.

“We extend our thanks to ABS Australia for their support of the project and collectively we stand behind a common goal to advance the Hereford breed,’’ Mr Donoghue said.

The bulls breeder, Ian Locke said Matty has multiple positive attributes. “The bull has calving ease, bends the growth curve, is slightly above average for milk, and good on the carcase traits, not only marbling but also eye muscle area and positive fat,’’ Mr Locke said.

He said marbling was vital for Australian commercial beef producers.

“The big processors are telling us loud and clear we need to have cattle which up the grade on the MSA Index and an important component of that is marbling.’’

Herefords Australia Director, restaurateur and dry aged beef specialist Tim Burvill has been one of the key drivers of increasing marbling in Hereford beef.

“I am at the coal face of selling meat at the wholesale and retail level. Our customers are attracted to higher marbling steaks, as there is a general awareness marbling has an undeniable and significant impact on the eating quality of meat,’’ Mr Burvill said.

He said the Super Sires was a great opportunity to achieve rapid genetic gain in intramuscular fat.

“It has taken the Wirruna stud 20 years of concerted effort to breed a bull with this level of IMF. The exciting news for our members, is that they can now have access to these genetics, and create a quantum shift in the marbling level of their herd, in a much shorter time frame.”

“It will be a two to four year process until we start seeing an increase in marbling over the hooks as a result of this program – but my advice to all Hereford producers is that we’ve just got to get going.’’ 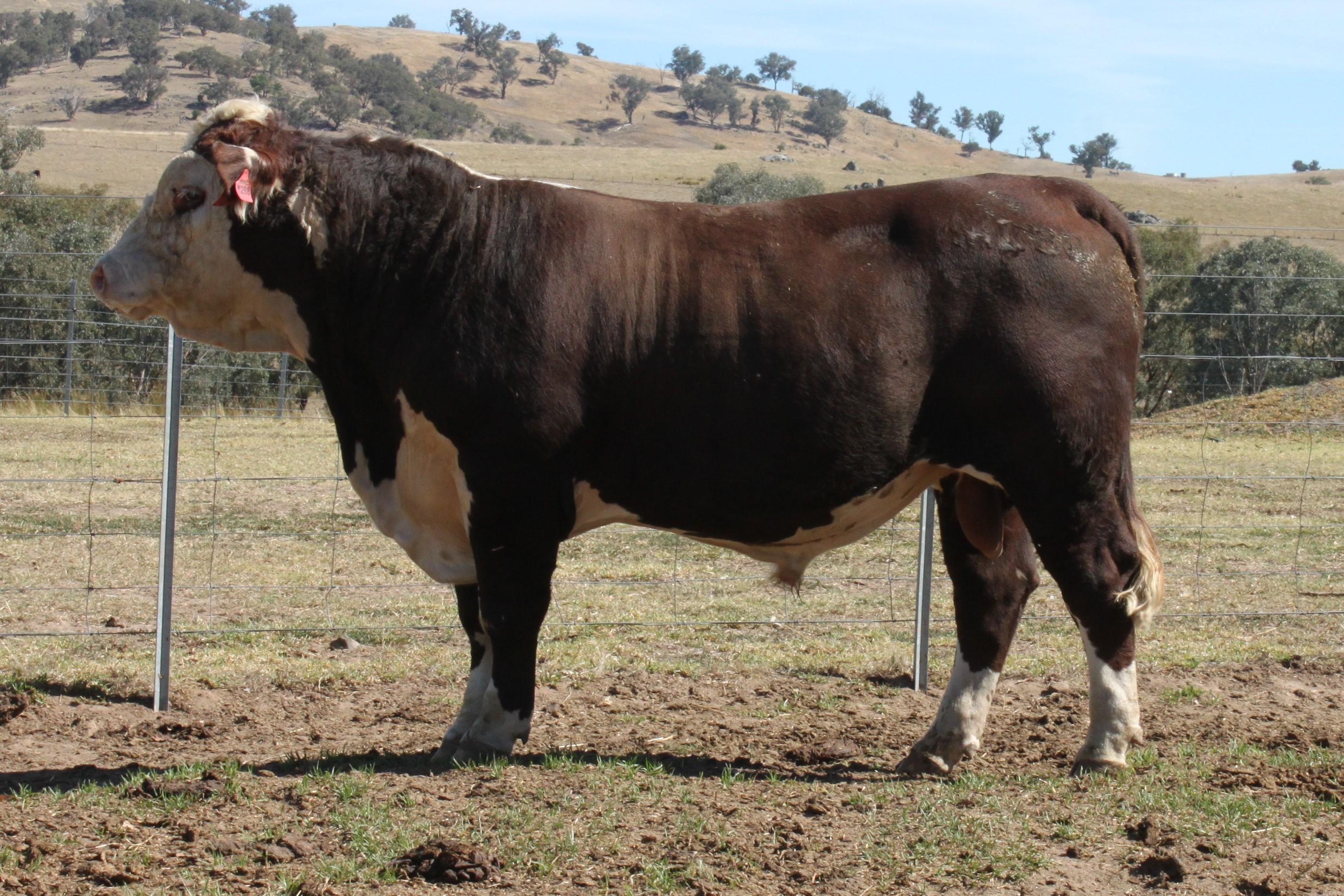 Wirruna Matty M288 is the first sire to be offered under the Hereford True Genetics – Super Sires project.