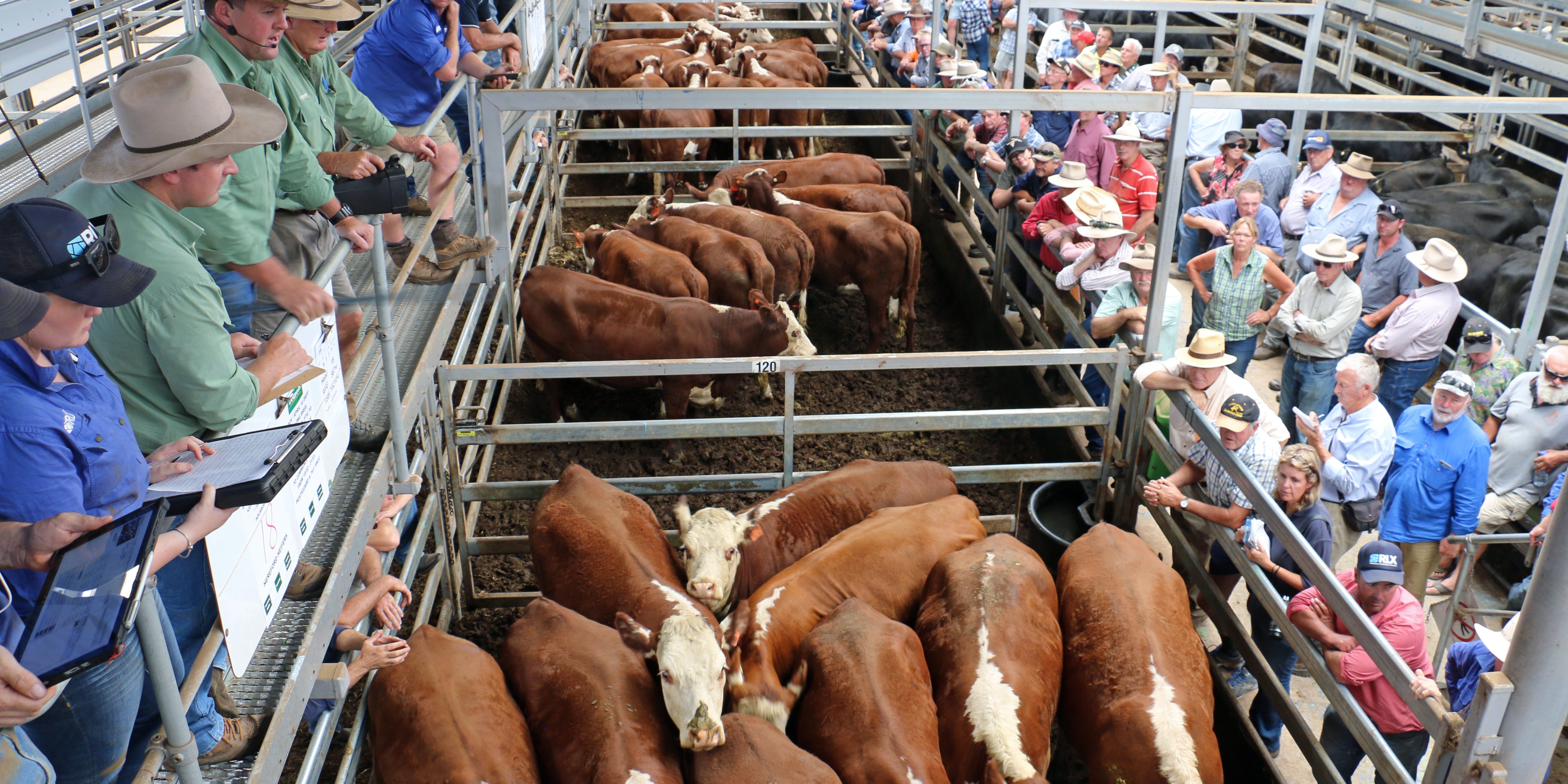 Quality PTIC autumn calving heifers tracked $250 behind last year, and the majority of cows and calves sold below split value.

Hereford and Shorthorn-Hereford heifers PTIC to either Hereford or Angus bulls for a February-March calving sold for $1560-$1860 or 251-360c/kg.

Weighing 560kg, the Newcomen bred heifers were joined to low birthweight Angus bulls to calve February-March, and were bought by Elders Yea for 332c/kg.

Mr Passalaqua bought the heifers for $1100 and had hoped to average $1800 at Wodonga.

“I have taken on three more leaseholds and am buying more steers and heifers,’’ he said.

“I’m looking for 280-320kg cattle but have bought up to 390kg steers, finishing them for Greenhams, Tasmania, Coles or Thomas Foods International.’’

Bill and Mary Goldsworthy, Eurobin, sold the tops of their drop at Wodonga – two-and-a-half-year-old Kaludah and Cloverbank heifers, PTIC to Hereford bulls for a February calving.

They weighed 636kg and were bought by Stephen Street, Elders Myrtleford, for $1600.

“These heifers were 40-50kg heavier than last year’s and have had no supplementary feeding,’’ Mr Goldsworthy said.

Tony Reardon, Brooklyn Pastoral, Mansfield, was on hand to see his Black Baldy heifers, Mawarra blood, 22 months, 545kg and joined for an autumn calving to an Angus bull, sell for $1800 to Elders Wangaratta, account Scott Stow.

Mr Reardon said the heifers sold bang on his expected price of $1800.

“These are heifer’s calves and I aimed to value add them,’’ he said.

Mr Stow, a Limousin breeder, has bought additional land and is restocking.

“I’m after 25-30 cows to join to Limousin bulls and have blown my budget today,’’ he said.

“If these price settle where they are now, everyone is getting a bit.’’

They were AIed to a low birthweight bull in a synchronised joining to calve over a week, and sold for $2000 to Brian Unthank Rural.

“I had bought these well last September and took a risk on them,’’ Mr Watkins said.

At the Wodonga F1 female sale on Wednesday, he had topped at $2600 for Hereford-Friesian heifers and averaged $2200.

“This is the last of the heifers – we just have our flock sheep, and stud ewes and rams to disperse,’’ Mrs O’Connell said.

“The first and second calvers will be continuing under the new owners.

“Last week the tops of the heifers had the weight and sold to a feedlot while I was pleased the next two pens went to restockers.’’

J W Culican, Mansfield, rang the bell in the cows and calves with Black Baldy heifers, 2.5 years, with four to five month old calves, and rejoined to an Angus bull, topping the whiteface offering at $2440 to Elders Holbrook.

“Noel Passalaqua bought the tops of the Newcomen heifers out of Ensay last year, they presented well and we had good inquiry on them but $1860 was as far as we could go.

“In saying that, there is still a good margin for producers who have bought Hereford cattle and joined them.”

“A big percentage of our vealer producers are buying a beef bred Black Baldy as opposed to a Friesian cross cow as it gives the opportunity to supply either vealer or store markets,’’ he said.

“The cattle were for genuine sale and were classed-in heifers but the fact they weren’t autumn calving had an effect, making just above their feeder rate.

“People were wanting heifers calved out or on the point of a February/March calving.

“It was tough going unfortunately but the cattle were right.’’

Mr Shea said the top end cattle overall were strong without going over the top.

“Going forward, it is a reflection of what our end-product markets are doing – the prime market is having a big effect on these store cattle.

“We have had two good weeks with our weaner sales and it is a good thing we didn’t have them later as the fat market is having a detrimental affect.

“Historically, they are still pretty strong prices today but we are seeing a correction.’’ Joyce McConnell, Deniliquin, sold the last of the PTIC heifers as part of the Emu Park herd disperse at Wodonga today. The Yarram Park blood heifers, 16-17 months, and depastured to Yarram Park bulls, topped at $1300. Whiteface heifers joined for an autumn calving topped at $1860, two and a half year old autumn calving heifers sold to $2000 and Black Baldy cows and calves topped at $2440 at the Wodonga annual beef bred female store sale. Neville Watkins, Charleroi Partnership, Charleroi, sold this pen Black Baldy heifers, 2.5 years, 598kg, AIed to an Angus bull for a synchronised joining to calve over one week, for $2000 to Brian Unthank Rural. Rodwells take bids on a pen of Black Baldy heifers, 512kg, joined to calve in March over eight weeks, and knocked them down for $1650. Scott Stow, Warrenbayne, was on the look out for vealer mothers and paid $1800 for two pens of Black baldy heifers, 22 months, joined to an Angus bull for a February calving from Brooklyn Pastoral, Mansfield.