Backgrounders and Lotfeeders Push Steers to $1200 at Casterton 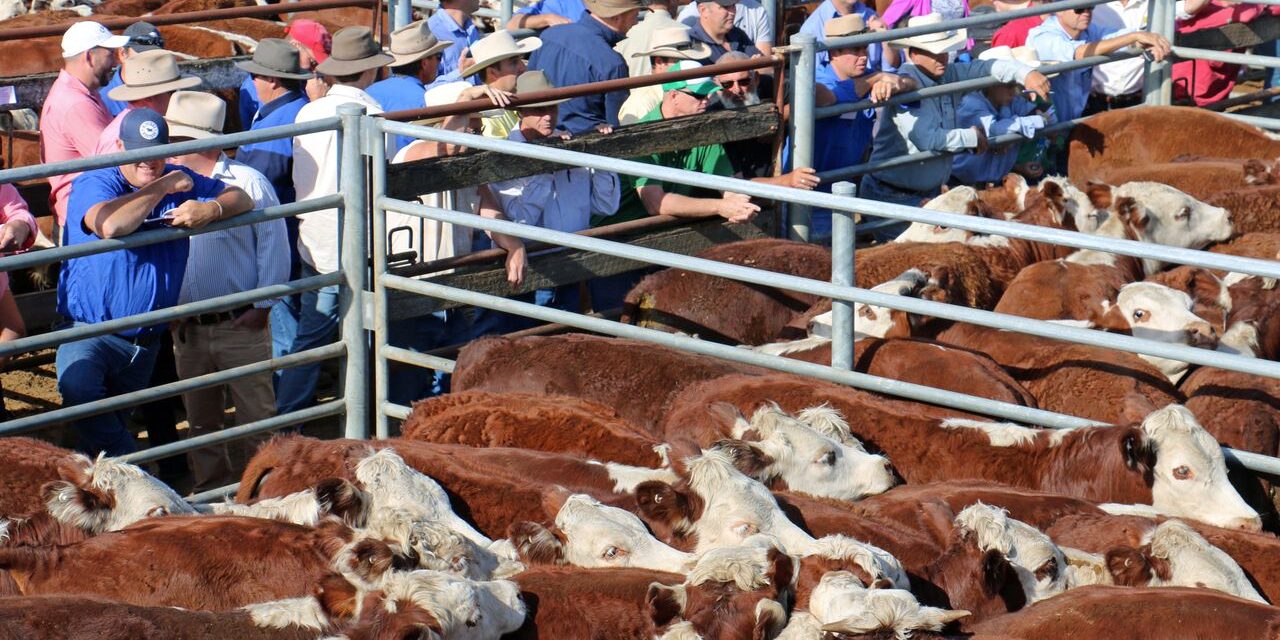 Backgrounders and lot feeders led the charge for whiteface weaners at Victoria’s Premier 62nd annual steer weaner sale at Casterton on Monday, paying to a top of $1200.

It had been traditionally held on the Friday of the sale week but was moved to a Monday in order to attract more buyers.
Selling agents, Elders Casterton, yarded 1446 Hereford, Black Baldy and Angus autumn 2016 drop steers.

In the afternoon, Black Baldy steers generally made 315-336c/kg at the Hamilton Independent Agents sale.
Buyers at Casterton were met with well-drafted, weaned and even lines of one-mark calves, with the majority European Union accredited and all well presented by vendors.

“We had up to 900 Hereford cattle penned and it was consistent right the way through,’’ he said.

“They had all been weaned for at least four to five weeks.

“Many stayed in the EU system which rewards people for their effort.’’

Mr Redfern described the calves as “even, stretchy and properly weaned’’.

The Lamberts opened the Hereford run with a pen weighing 391kg, the heaviest pen of autumn drop weaners they have ever offered.

They sold for the top whiteface dollars per head price of $1200 to Princess Royal feedlot, Burra, SA.

“We weaned the calves at the end of November and they were helped by the late rain,’’ Bill said.

“Moving the sale to a Monday is a good idea as we have missed out on the buyers over the last few years.’’

Bill said the record prices paid last year had injected confidence in the district with producers investing in machinery and infrastructure.

Going on recent sales, the Lamberts had hoped to average 330c/kg for their 178 March-April drop steers.

“Today’s prices were sustainable for both the buyer and the breeder,’’ Bill said.

“Our average weight is up from 328kg last year.

“Our lighter weaners bought by a steer finisher last year were sold at the spring store sale for a $200 profit (less expenses).

“Hopefully, the bullock fatteners buying today will come out in front.

“For us, the prices are still sustainable but there is no new tractor on the horizon.’’

Mr Greening will be sourcing 300-400 steers this week plus 600 heifers next week.

“These calves will join the Injemira Advantage program where we buy back calves from our bull buying clients.

“I have all the data on how the Shallum steers performed on our grids last year.’’

Mr Greening said softer markets had resulted in an increased margin, with “more money to play with’’.

“I am looking at 20 per cent down on last year in terms of value of what we pay for steers,’’ he said.

“It was a solid sale today without being stupid,’’ he said.

“The calves were weaned five weeks ago, with the weaning weights slightly up,’’ Mr Storer said.

“The Hereford is a good, placid breed and the doing ability is great.

“I sell them as weaners as I don’t have the country to finish heavier cattle.’’

Jeoff and Jill Hortle, Dunrobin, sold 88 steers and were keen to see the impact of the recent fire at Thomas Foods International’s Murray Bridge plant, and widespread rain in NSW on buying trends.

The couple welcomed the new grassfed, 100 per cent content verified Hereford brand, Hereford Boss, as a player in the marketplace.

Dale and Alex Sullivan, Shallum, Casterton, were down slightly in numbers at 92 steers but with similar liveweights as 2016.

“We had a really wet winter and we couldn’t get out a gator out into the paddocks,’’ Dale said.

“The calves were weaned four weeks ago onto hay and silage – they are EU accredited which has given us a 5c/kg premium in the past.

“I know my bloodlines and appreciate quiet, easy handling cattle suited to our country.’’