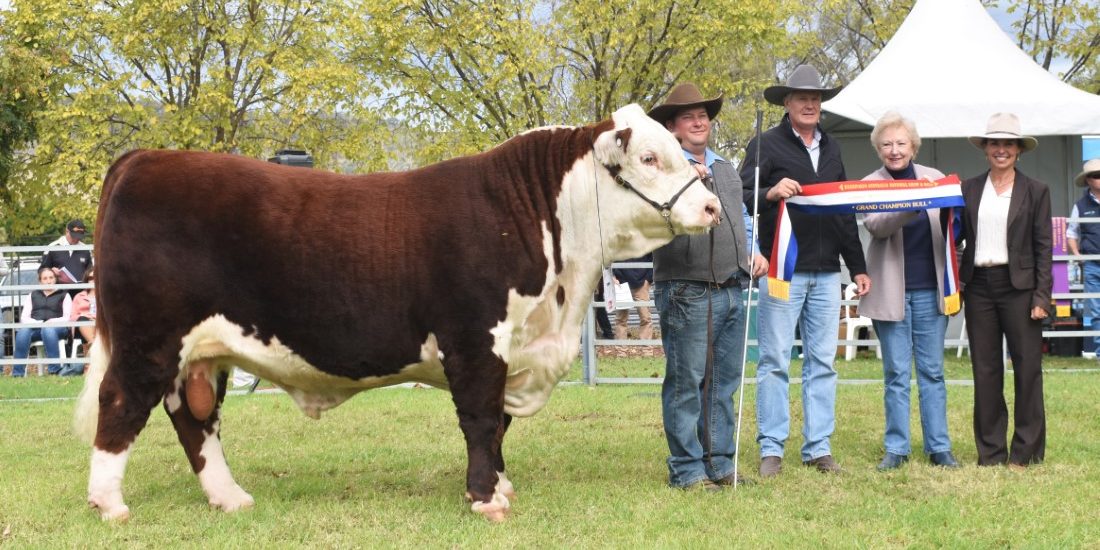 Kymarney Maverick Q009 stole the show at Wodonga on Wednesday morning, first taking out the intermediate champion title before going on to be judged grand champion bull of the show by Erica Halliday of Ben Nevis Angus, Walcha.

Ms Halliday was delighted to return to judge the 2021 Wodonga National Show in person having judged the event entirely online in 2020 due to COVID-19 restrictions.

“It’s so nice to actually be here and see the cattle, it was really nice to see the bulls in the flesh and see the people as well,” Ms Halliday said.

The 24-month-old grand champion was an ET calf sired by Tobruk Maverick out of Kymarney Regal K006.

Maverick Q009 weighed in at 1046 kilograms with an EMA measurement of 139 square centimetres, rib and rump fats of 15 and 28 millimetres and a scrotal circumference of 41 centimetres.

Ms Halliday was especially impressed with the two-year-old sire’s depth and capacity.

“If he were an Angus bull, I would buy him in a heartbeat because he’s got that extra depth, volume, depth of flank and depth of hindquarter that you just don’t see anymore.

“Along with that he’s got that beautiful skin and I can just see him breeding the most magnificent females,” Ms Halliday said.

Ms Halliday didn’t realise the bulls were full brothers until the conclusion of the show but was delighted when she found out.

Maverick Q029 is the natural calf of dam Kymarney Regal K006 and is three months younger than his ET brother.

Weighing in at 916 kilograms with a 40-centimetre scrotal circumference Ms Halliday described Maverick Q029 as “an absolute standout”.

“He looks like a sire, he’s got that wonderful presence about him and I think he’s a true champion in that respect,” Ms Halliday said.

Kymarney stud principal Scott Lewington was “very happy” with his show result and said that both the Maverick bulls were true to the type of animal he aims to produce.

“I’m trying to breed an animal that I like the look of but is industry relevant with data and type,” Mr Lewington said.

Reserve junior champion was awarded to Mawarra If Only Q264, exhibited by Mawarra Herefords.

If Only appealed to the judge for his overall shape and composition.

Reserve champion in the Intermediate division was awarded to another Mawarra sire; Mawarra Terminator Q274.

22-month-old Terminator weighed in at 966kg with an EMA of 137 square centimetres and was described as “an absolute powerhouse” by Ms Halliday.

The Mawarra team also took out the award for most successful exhibitor of the show.

In the senior classes the champion sash was presented to Kaludah Lotto Q261, exhibited by Kaludah Herefords, Cooma.

The 28-month-old homozygous polled sire was the third heaviest bull in the catalogue, weighing in at 1062 kilograms with an EMA of 142 square centimetres.

“He’s so commercially viable, he’s got lovely carcase on him and is really thick and really long.

“He carries himself just beautifully, he just glides, so he’s a deserved winner here in the senior champion bull section,” Ms Halliday said.

Reserve champion in the senior division was presented to Tarcombe Unique Q058, exhibited by Tim Hayes of Tarcombe Herefords.

Ms Halliday admired Unique’s sire appeal and strength and described him as a credit to his breeder.

“He’s got that beautiful skin and coat type that I think is going to transmit into breeding absolutely productive and beautiful females,” Ms Halliday said.

Ms Halliday complimented the overall quality of the bulls that made champion and reserve and commended the structural soundness of the animals on show.

“[The bulls] that came up in the champion are really square in their structure and really have a lot of longevity to them as well as quality,” Ms Halliday said.

Wodonga Show and Sale coordinator Jamie-Lee Oldfield was delighted to have Erica back to judge for a second year and reported nothing but good feedback from anyone who watched the judging.

“[Erica] is such a credit to the Australian beef industry and obviously her own operation, she’s an outstanding judge and speaks magnificently,” Ms Oldfield said. 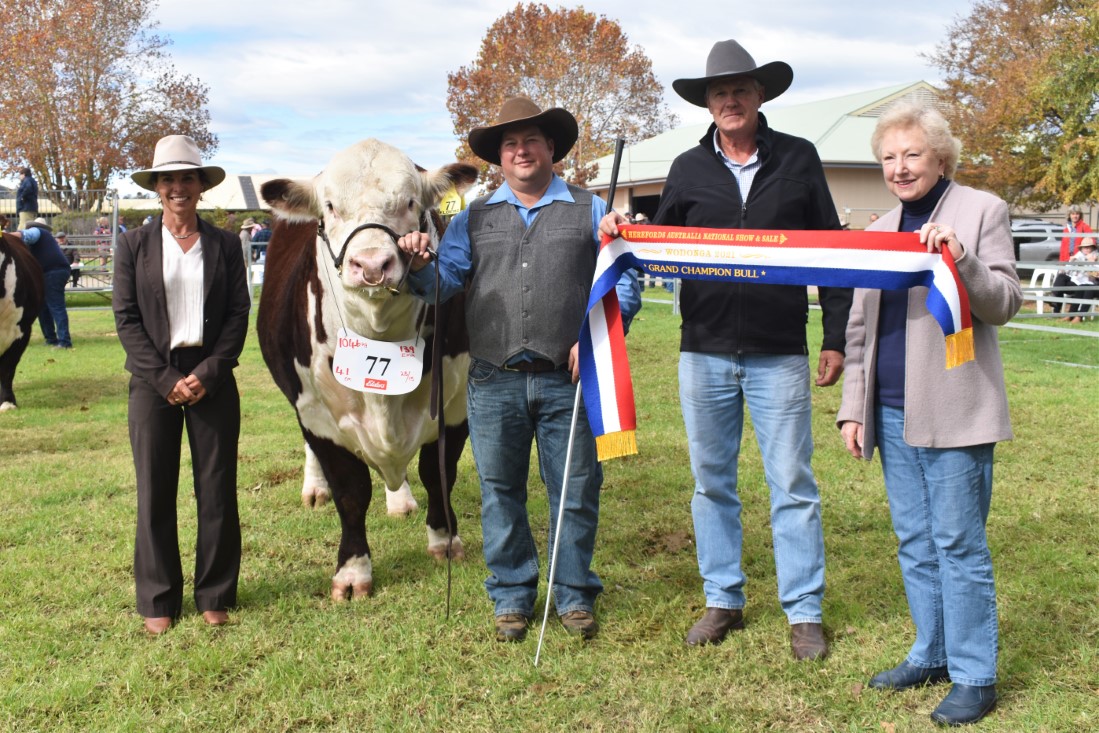 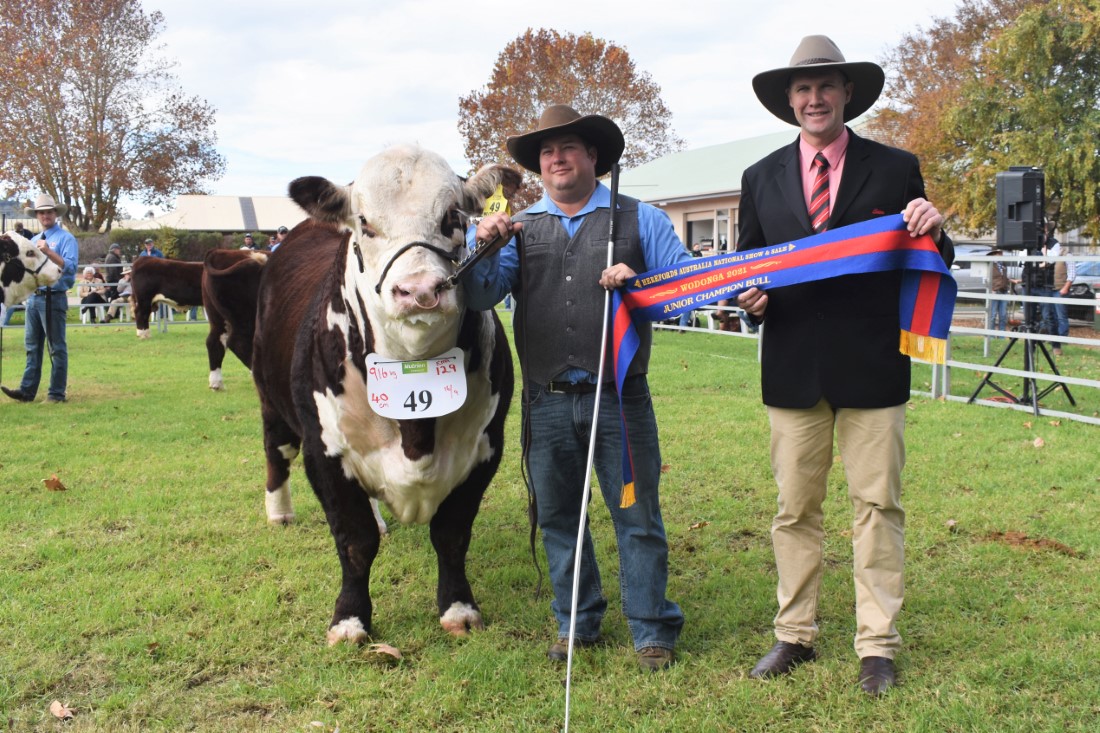 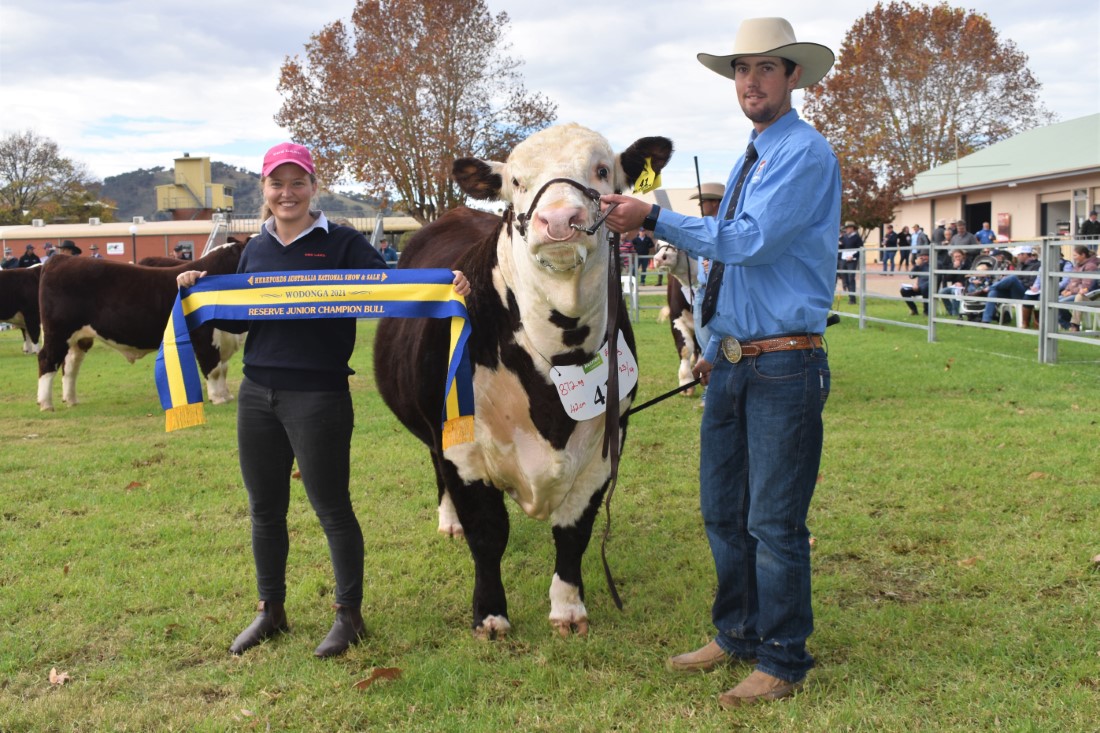 Reserve junior champion bull Mawarra If Only Q264 with Olivia Calver, The Land and Brandon Sykes of Mawarra. 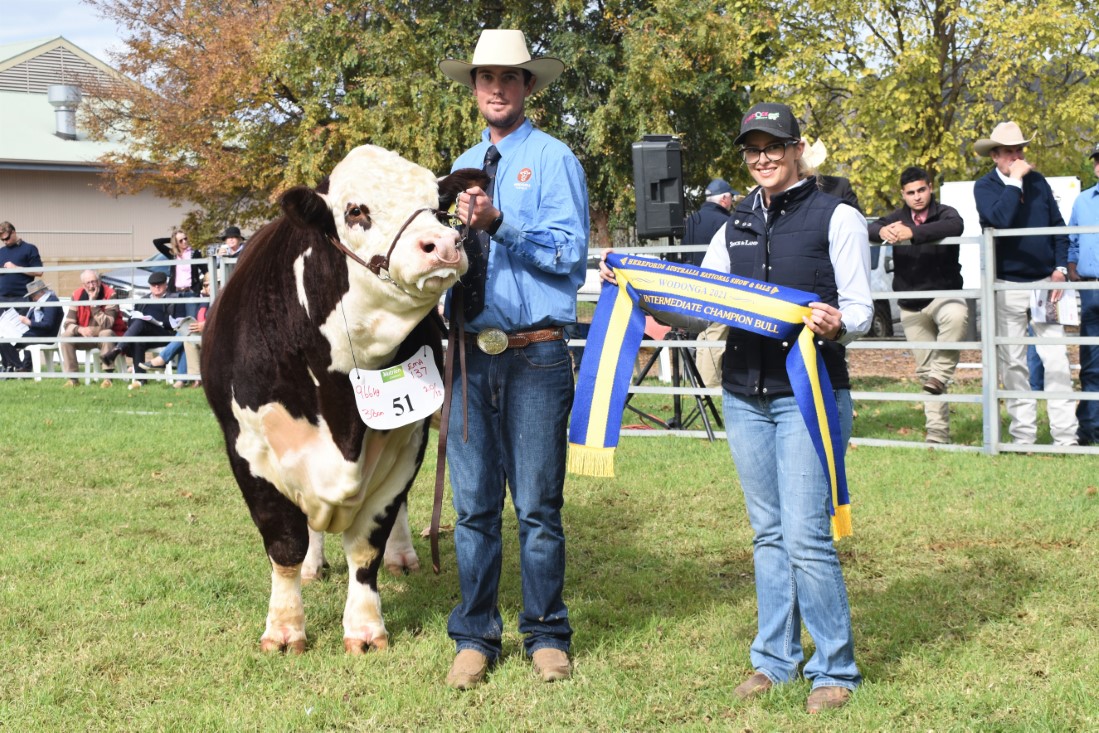 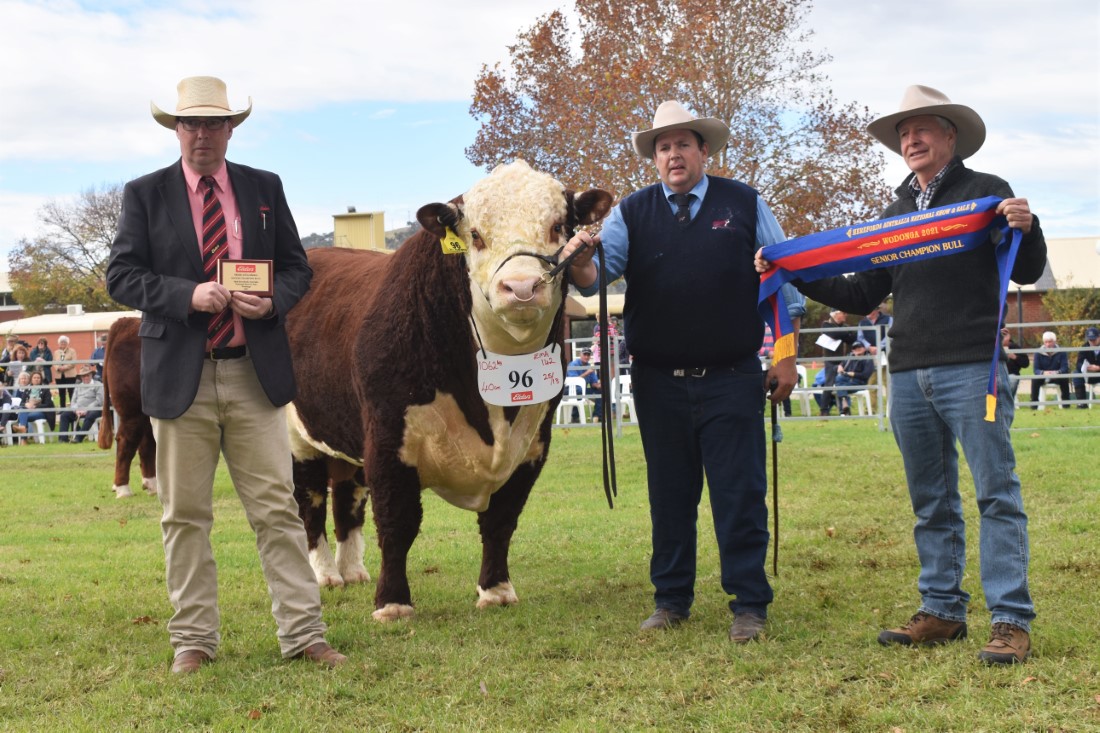 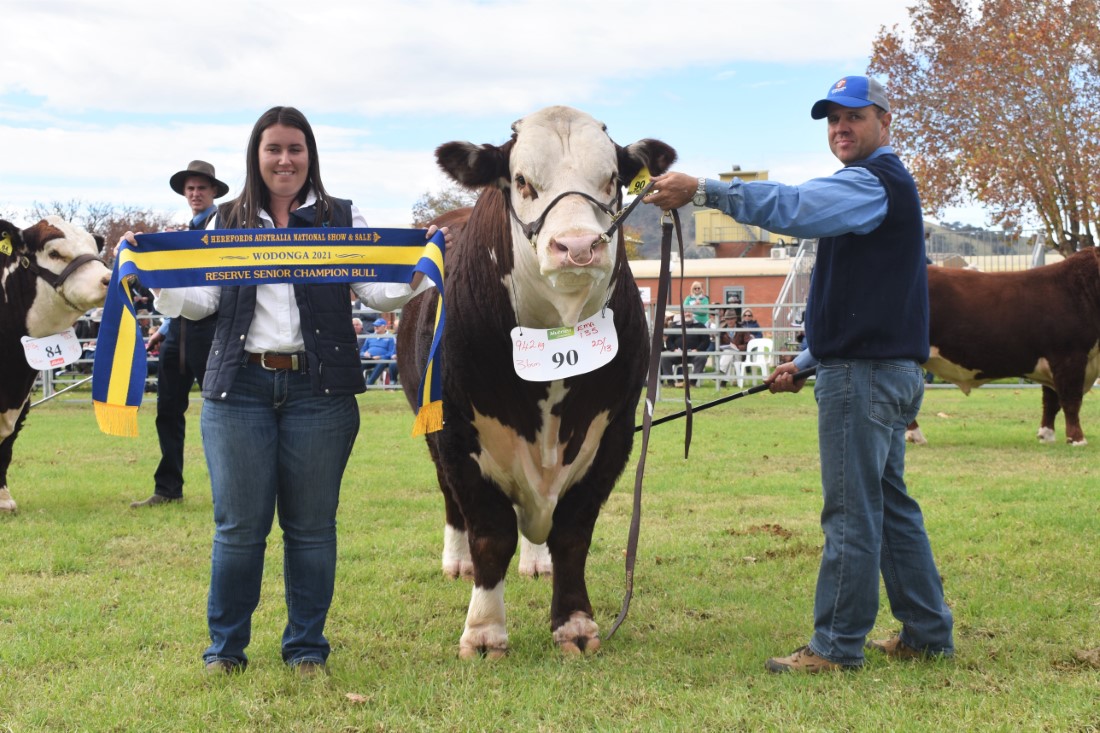