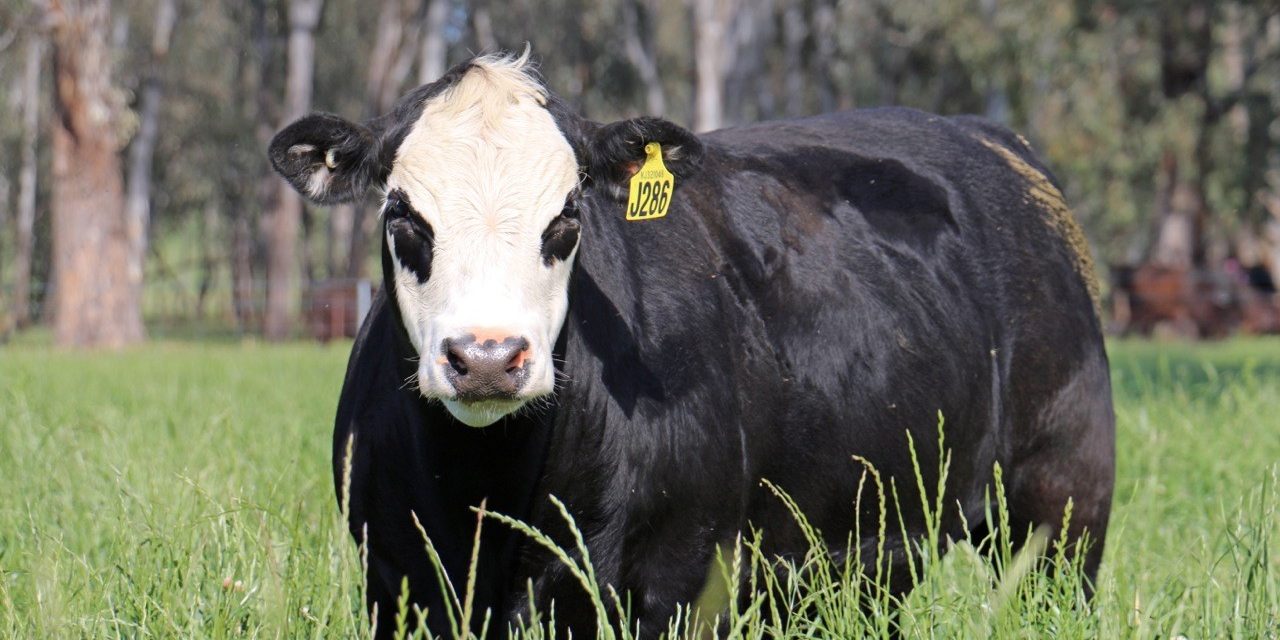 Better maternal traits in crossbred dams and higher growth rates in crossbred progeny are the primary benefits of heterosis that have so far been uncovered in the Herefords Australia Black Baldy Trial.

The trial was developed in 2014 with the first AI matings taking place in September of that year.

Professor Wayne Pitchford of the University of Adelaide discussed the emerging results of the trial with attendees of the 2019 Herefords Australia Breed Forum, held in Hamilton in June.

Professor Pitchford completed his PhD on the effects of heterosis in 1992 with a focus on Hereford/Brahman cross animals and how the purebreds and crossbreds performed under different pasture quality environments.

“So, what that tells me about the mechanism of heterosis is that it’s not making the animals more biologically efficient, it’s just making them have bigger appetites,” Professor Pitchford said.

The Herefords Australia trial has been conducted in North Eastern Tasmania in Musselroe Bay and has followed three cohorts of animals, with the final cohort of steers being killed towards the end of 2019.

A range of Hereford and Angus bulls have been used throughout the trial and bred to Angus and black baldy females.

The sires used in the Herefords Australia trial are high data accuracy sires with links to other progeny trials from Australia and New Zealand.

“We’ve got Angus bulls and Hereford bulls that have been used across lots of different projects. Lots of the progeny are genotyped, and lots of this data will go into Breedplan in New Zealand and Australia and so it contributes to building up that reference population.

“It’s really quite important to have those genetic links between projects,” Professor Pitchford said.

The Herefords Australia Black Baldy Trial is similar to other heterosis research projects that have been conducted in the US, including projects conducted by the US Department of Ag Meat and Animal Research Centre (USDA MARC) in 1974 and in 1985 and the more recent Harris Ranch Heterosis Trial.

While the results of these earlier trials were known when the Herefords Australia trial was designed researchers wanted to see if there would be a difference in localised, Australian data.

The results that have been uncovered in the Australian trial have been very similar to the historical results of other trials and the more recent results from the US, according to Professor Pitchford.

The data from the Herefords Australia trial has shown that Hereford sired calves were eight percent heaver at birth than their purebred Angus counterparts, and four percent heavier than the purebreds at weaning.

Calving ease was an area of particular interest in the trial, as Hereford bulls have traditionally been considered to have lower calving ease than Angus sires.

The only group with slightly more calving difficulties in the trial were the heifers that had male calves sired by Hereford bulls.

When it comes to the maternal benefits of heterosis, crossbred heifers at the time of joining were heavier, taller and fatter than the pure Angus heifers.

There was also a vast difference in the number of crossbred heifers that were pubertal at the time of joining when compared to the purebreds, however this did not appear to affect conception rates.

“There was no breed difference in the number of heifers who had a calf.

“[When the heifers are] suddenly put with the bull and that’s combined with really good pasture, (they’re joined at exactly the right time for that spring flush of pasture,) there’s no difference between the breeds in their calving response,” Professor Pitchford said.

However, the maternal difference emerged more prominently at the time of the heifers’ second calving, with more of the black baldy heifers having a second calf than the pure Angus heifers.

The heightened performance of the crossbred second calvers is significant as this is a big driver of overall herd fertility and therefore profitability.

The trial also examined the differences in weaning weights of calves out of purebred and crossbred dams and found there was a further advantage to crossbreeding here.

The calves out of pure Angus females averaged 218kg at weaning and the calves out of black baldy dams weighed 225kg, so there was an advantage of 7kg of having a Hereford sired mum relative to a pure Angus mum, Professor Pitchford explained.

Jamie Jones also presented at the Forum and discussed the carcase composition results of the Herefords Australia Black Baldy Trial, which has been the focus of her Honours project at the University of Adelaide.

The carcase results (also adjusted for age) revealed that the Hereford sired steers were heavier, had a larger eye muscle area (EMA) and were fatter than Angus sired steers, however the larger EMA was directly correlated with the weight of the crossbred steers.

“Hereford sired steers were four percent heavier and had a four percent larger EMA [at time of slaughter] but once we adjusted the EMA for the carcase weight there was no difference,” Ms Jones said.

This result was consistent with scan data in the trial and shows that there is no difference in muscularity in the crossbreds, they are just bigger animals than the purebreds.

The biggest difference in carcase data was in the intramuscular fat (IMF), with the purebred Angus steers scoring much higher for IMF than the Hereford sired animals.

Watch the full presentation from Professor Pitchford at the 2019 Herefords Australia Breed Forum below: 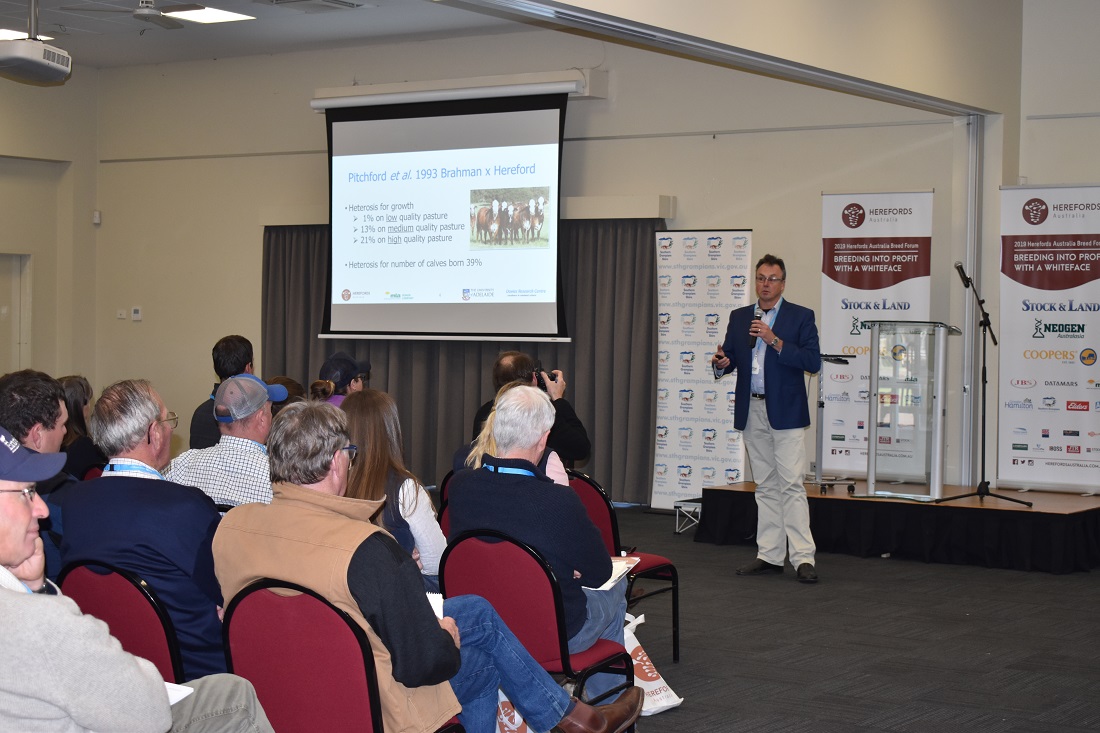 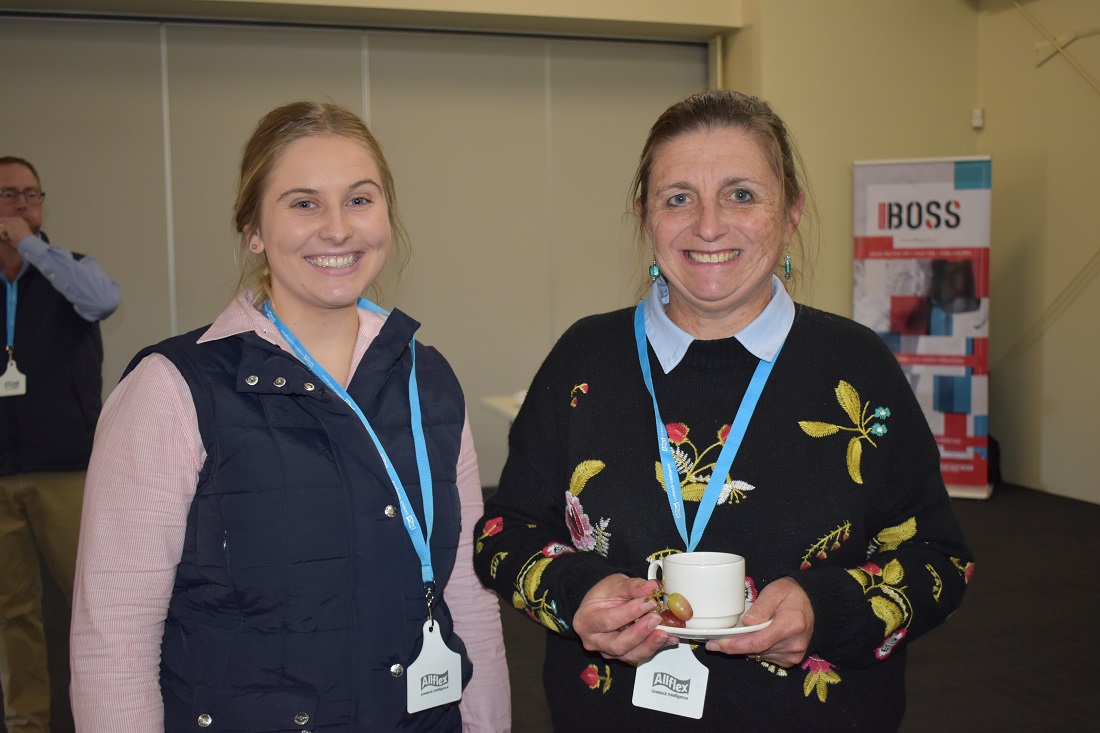 Jamie Jones of the University Adelaide and Judith Pitchford at the Breed Forum in Hamilton.