Hereford weaners bring it home with prices hitting $1180 at Omeo 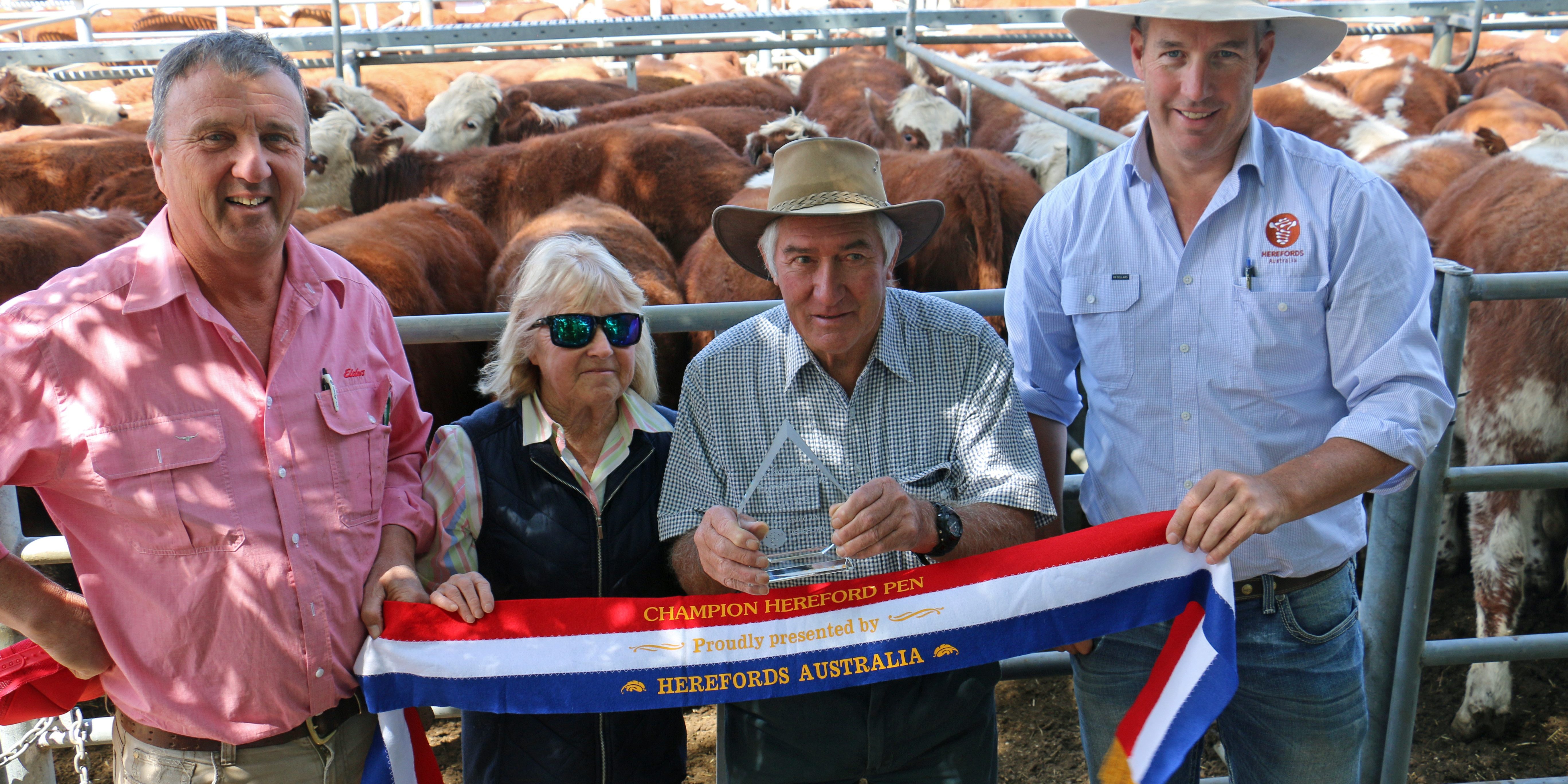 Top dollar was paid for quality Hereford steers and heifers at the 79th annual Mountain Weaner Calf Sale at Omeo on Wednesday afternoon.

Wrapping up the two days of Victorian mountain calf sales, purebred Hereford steers sold to a top price of $1180 while heifers topped at $1090.

Prices once again dropped off towards the lighter end of the run with Hereford steers making between $385 and $1180 to average $768.

On a cents per kilo basis, Elders agent David Hill quoted heavy cattle at between 285-290c/kg while the middle run sold for approximately 270-280c/kg.

The top price in the steer runs was paid for the opening pen of 15 March/April drop Mawarra, Newcomen, Bowmont and Hyland blood Hereford steers, offered by Peter Faithful, Omeo.

The top heifer price of $1090 was paid for a pen of 22 Mawarra and Newcomen blood EU heifers sold by Simon and Sonia Lawlor, Omeo.

David Hill was blown away with the strength of the heifer market not only at Omeo but over the two days of sales.

“We’ve had an extraordinary result with Hereford heifers over the last 48 hours with Benambra yesterday and Ensay this morning.

“The heifers had been quite a concern leading up to these sales, but we were fortunate enough to have two volume orders that have been able to acquire them with a satisfactory result.” Mr Hill said.

“They were well grown, quiet, even, EU accredited, weaned properly, had the health treatments and were well prepared for the buyer,’’ Mr Rollason said.

The champion pen of 20 steers boasted bloodlines from Mawarra, Nunniong, Valley Vista and Karoonda Hereford studs and sold for the second top price of $1170.

Mr Ah Sam said the April-May drop calves had been weaned for six weeks with average weights down on last year due to the dry season.

Cattle sold to buyers predominantly in southern areas including Tasmania and the Gippsland region.

Cattle didn’t sell any further west than Warrnambool or further north than Cootamundra while the only cattle going to the Riverina were for feedlots.

Backgrounder and lotfeeder Alastair Nelson, Colac, picked up a number of the heavier steers for YC Feeding Company.

The cattle will be backgrounded for six to eight weeks on silage and hay at Birregurra, followed by 70-100 days grain feeding at Jalna Feedlot, Anakie.

Mr Nelson picked up 605 steers and 89 heifers, saying Omeo offered the best line-up of Herefords he had seen in his buying lifetime.

He appreciated that most of the yarding had been well weaned prior to the sale.

“I wouldn’t have purchased any cattle that weren’t weaned.” Mr Nelson said.

Vendors were once again commended on presenting their cattle in such good condition despite the poor season leading up to the sale.

“Once again it was an excellent yarding of quality bred cattle that have really defined themselves with the seasonal conditions.

“It’s been tough around here for the last 12-18 months and a failed winter looking ahead, for those cattle to come up the way they have has been extraordinary.” Mr Hill said.

Mr Hill said it was rewarding for producers to receive good prices for their cattle, particularly since there are high per unit costs associated with the stock for the fodder used to get them to the sale and for their dams as well. 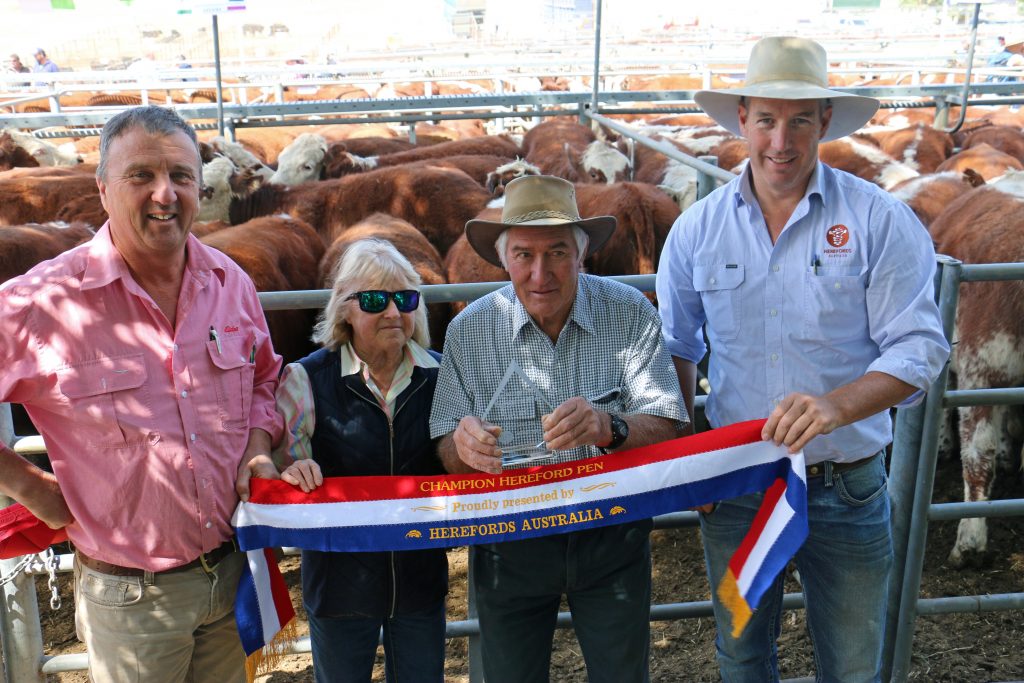 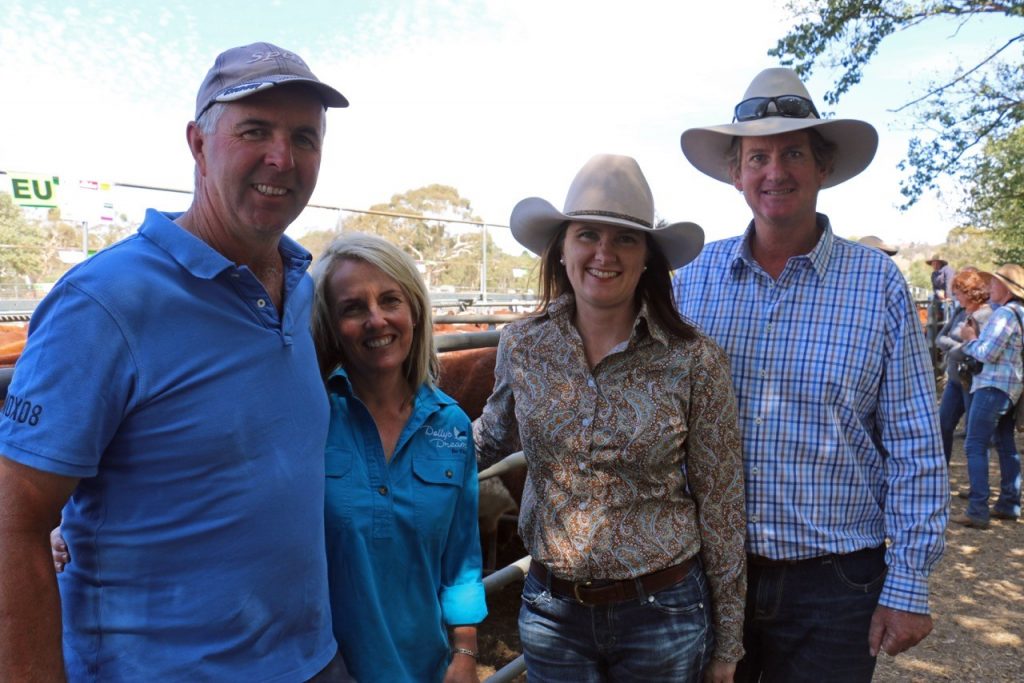 Simon and Sonya Lawlor, Omeo, with Deanne and Peter Sykes, Longford, at the Omeo weaner sale. The Lawlors topped the heifer market on $1090. 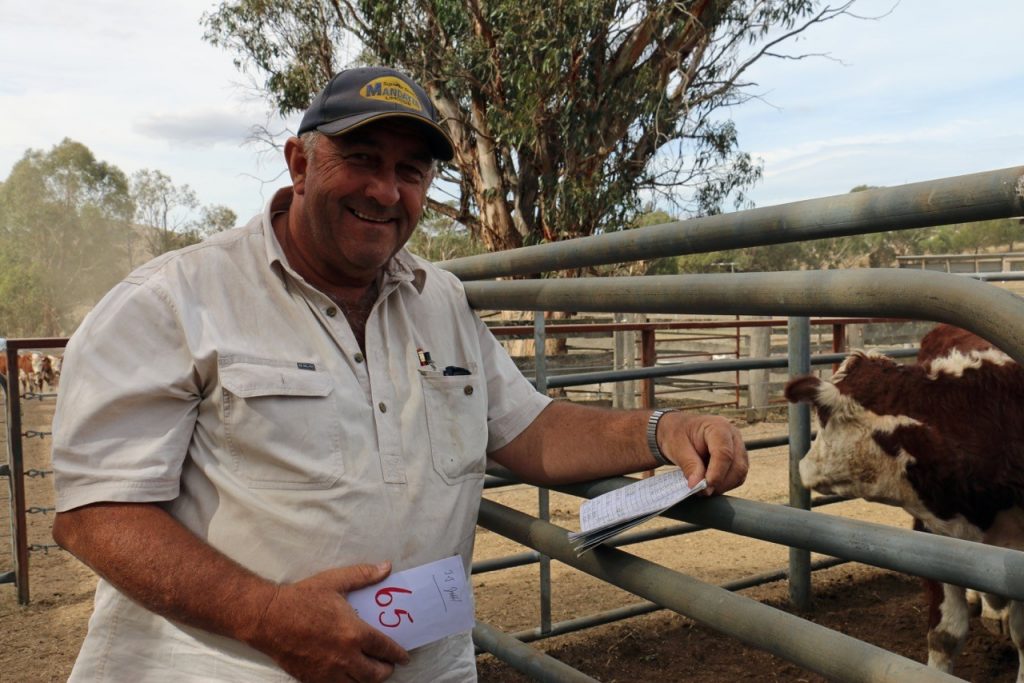 Alastair Nelson, YC Feeding Colac, sourced 605 steers and 89 heifers out of the Mountain sales for grain feeding for 70-100 days. 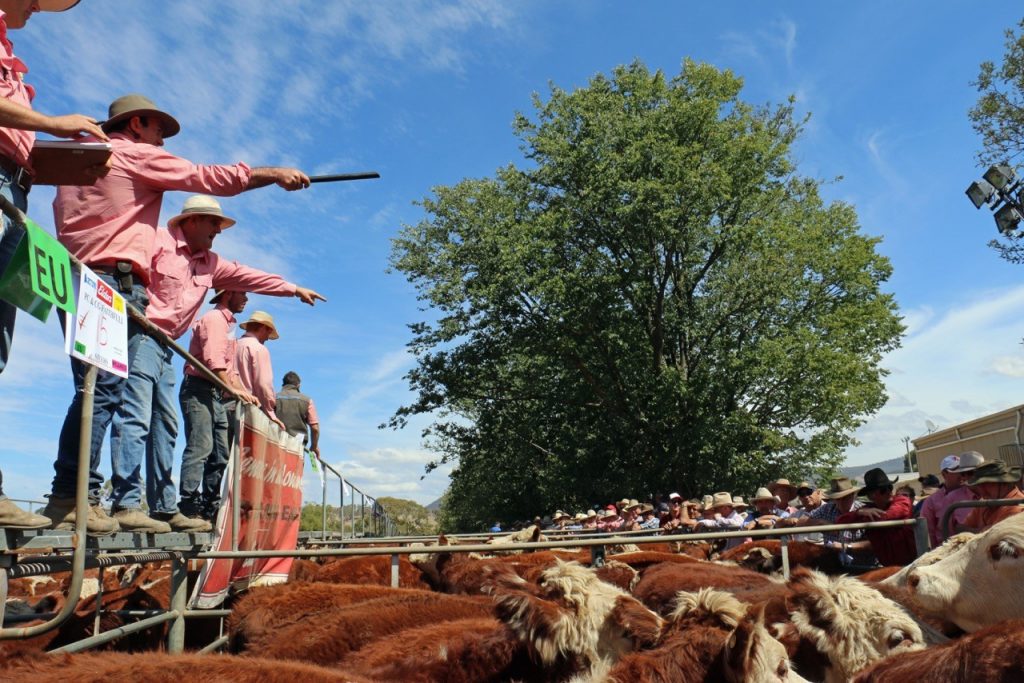 The Elders team takes bids on the opening pen of steers which were knocked down for $1180 at Omeo. 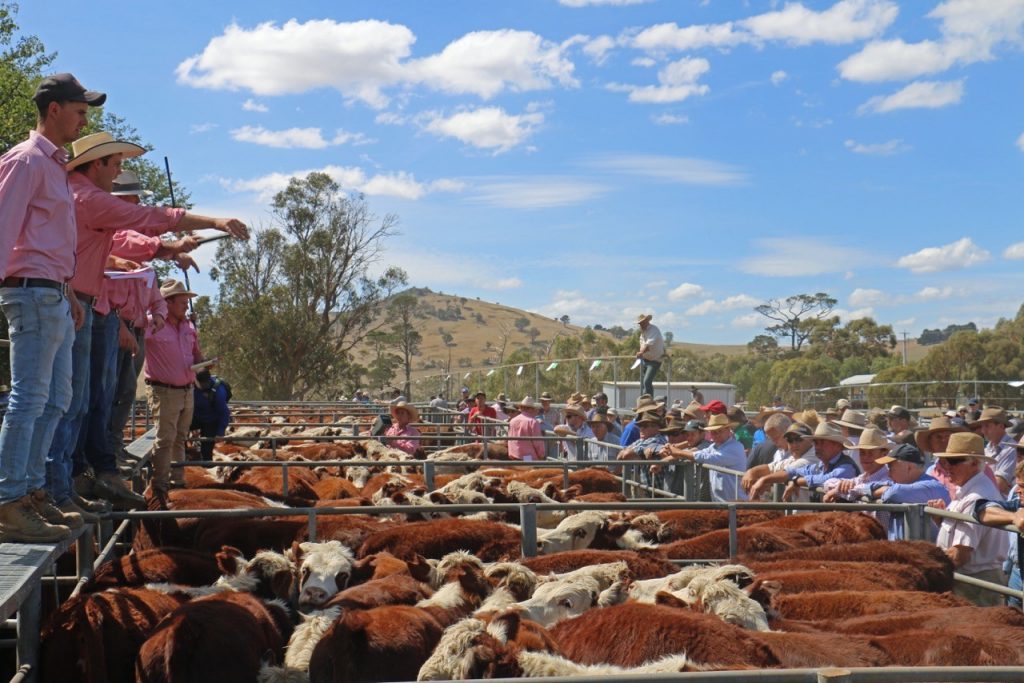 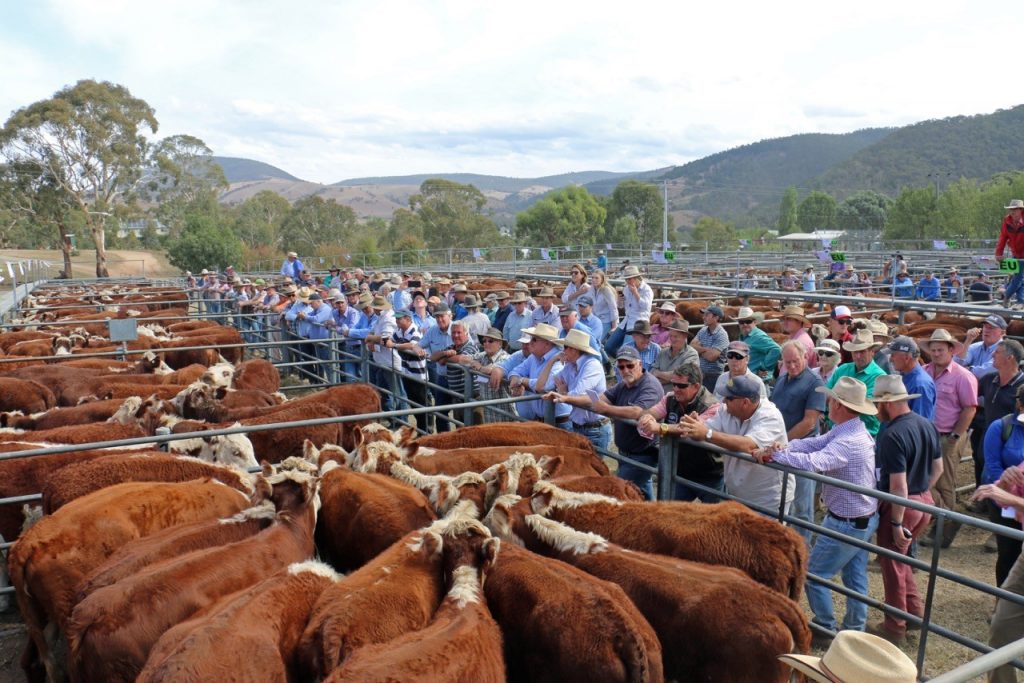 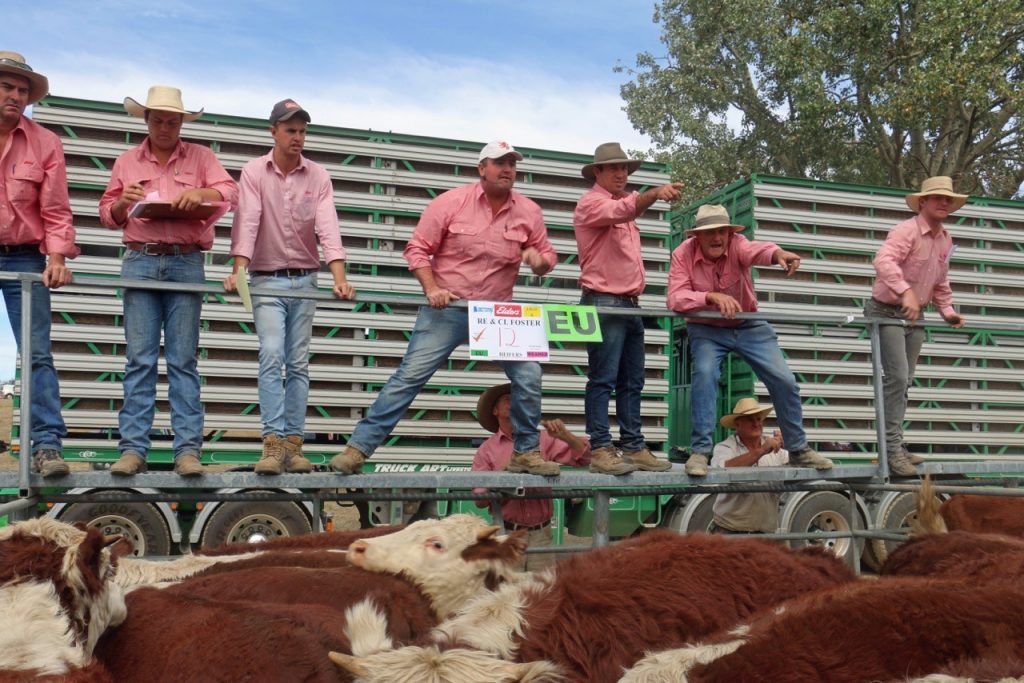 The Elders team sell a pen of Hereford heifers for $910 and destined for live export.