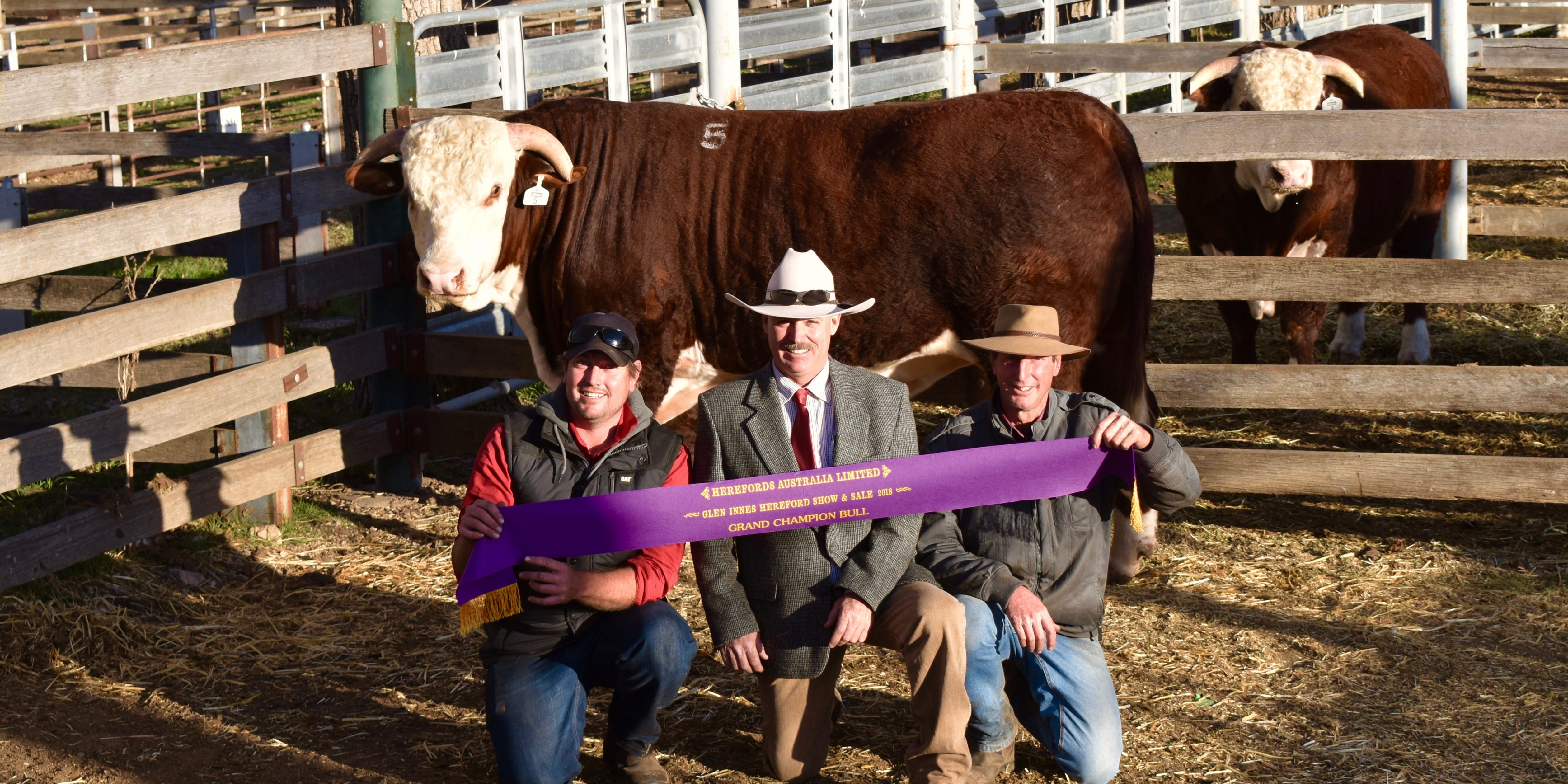 Five of the six bulls from the winning Kylandee pen were sired by Courallie J F051 Jackhammer (H), while Moree is a Thornleigh 325 Hullabulloo H325 (H) son.

“This pen on top is a clear winner for me, they’re very similar in type and they’re just a credit to the breeders.” Mr Runzer said.

The success didn’t end there for the Kylandee team, with Kylandee Moorland (H) being awarded grand champion bull of the show.

Continuing the successful run for the Thomas family, Kylandee Murumbo (H) was announced as the Yardsmen’s Pick, an award unique to the Glen Innes Hereford Show.

“This is our sixth year [coming to Glen Innes] and we’ve had three grand champions and three Yardsmen’s Picks.” Phil Thomas said.

Second place in the pen of six bulls was awarded to the Supple Whiteface team, Guyra.

Braelyn Sharka M131 (H) exhibited by Neville and Denise Shannon of Braelyn Herefords, Merrits Creek, Queensland, took out the champion sash in the individual classes after receiving first place in the Junior division.

“He stood out for me early in the day, he drops down and is square right through. He looks like what I’m trying to breed.” Mr Runzer said.

The pens of three Hereford bulls classes were closely contended. Dundee Echo Park Herefords took out the top Junior pen with three South Boorook Bombay (H) sons, while Kylandee came in a close second with three of their bulls from their winning team of six.

The second placed senior pen of three was awarded to Battalion Herefords.

The three Wendouree bulls were also named the champion pen of three over the Dundee Junior team, impressing the judge with their similarity and structure.

In the individual classes, Neridah New Direction N011 (ET) (P) claimed the top place in the Young Guns division. Exhibited by the Lamph family, the 19-month-old son of Harvie Ladies Man 4L (IMP CAN) (P) caught the judge’s attention with his length and structure.

“He’s safe the whole way around and a rib longer. He’s a clear winner for me.” Mr Runzer said.

Second place in the Young Guns division was awarded to Swanvale Katnook N704 (P), exhibited by the Weller family.

“He’s got great length of body, we get paid per kilogram so he’s a clear winner for me.’’ Mr Runzer said.

The senior division was won by Supple Mailman (P). Exhibited by Ben and Leanne Rumbel, Mailman weighed in at 1080kg and had a raw eye muscle scan of 126sqcm.

Second place in the senior division was awarded to Bahreenah Magnum (S).

Fred Starr of Foxforth Herefords with the Intermediate second place ribbon which was awarded to Foxforth Major.

The champion pen of three bulls was awarded to the first placed Senior team from Wendouree Poll Herefords. Pictured with Ray Jamieson of Wendouree.