Grass finishers, lot feeders and processors will have almost 18,000 whiteface steers to select from in the opening week of the 2017 Victorian weaner sales circuit.

With improved seasonal conditions and a strong store market, vendors are optimistic liveweights will be up by 20kg while buyers are expecting to pay 370-420c/kg for the heavier steers.

Around 4500 whiteface steers are expected for the Hereford feature sale held by Elders, Landmark and Corcoran Parker at Wodonga on Thursday, January 12.

Wodonga’s independent agents will hold their whiteface sale of 3600 head on Friday, January 13.

Herefords Australia will be sponsoring champion pens at Hamilton, Casterton and Wodonga sales.

Landmark has flagged it will be a big player in the market to fulfil a single pastoral order for 10,000 whiteface steers and heifers.

He said both well bred European Union and non-EU accredited cattle would be accepted.

“We have mainly bought cattle from the southern areas and will be a player in the weaner sales over the coming weeks,’’ Mr Settree said.

“We are confident of obtaining the 10,000 head and are about a third of the way in.

“We are expecting the weaner sales to be very solid so we wanted to have a big portion locked in before hand.’’

Mr Settree said cattle had been sourced on AuctionsPlus, at physical sales and direct sales out of the paddock.

“Prices have eased over the last few weeks and I feel there will be a little more of a correction through the general market coming into Christmas as people get out of numbers they don’t want to carry through.

“But, once the weaner sales start, it will be all grass fever.’’

Across the week of the 2016 western district sales, the Hereford breed’s weight gain ability during dry seasons played a trump card with whiteface calves outpacing Angus on a dollars per head basis of $48 to finish at $1378.

Purebred calves topped the week at 353c/kg – achieved at both Hamilton and Casterton, while Black Baldies finished the week on a top of 354c/kg at Casterton.

The average price for the feature Hereford sale at Hamilton was $1065, giving vendors an extra 100c/kg in their pockets on 2015.

Bill and Geoff Lambert, Taronga Poll Herefords, Paschendale, have been long time vendors at the Casterton sales and each year drill down to produce the statistics.

Despite the dry spring of 2015, their average weights were up by 30kg.

Bill said the wet winter and good spring would result in the weaners averaging around 340kg liveweight next month.

He said British bred weaners, 320-380kg, had sold up to $1400 at Casterton on December 15, but the market lacked lot feeder and processor buyers.

“Everyone in the south-west has grass and buyers from south eastern South Australia are over here chasing cattle,’’ Bill said.

“Those calves bought in the autumn at 350c/kg were selling in November to average $2500 over-the-hooks, so those buyers will bulk up the market.

“Last year we had a dry spring and people were pressured to sell weaners early but this time around the calves have been kept back for the special sales.’’

“The cattle will be even with little tail in them but the word is some buyers will be sticking to a set budget of $1200.’’

Phil Gledhill, Elders Holbrook, will be buying steers and heifers at the western district sales.

He expects the calves to have plenty of weight and prices to be strong on the back of increased local competition.

Mr Gledhill said northern buyer interest was not anticipated but “rain could change that overnight’’.

He said steers over 280kg would most likely sell for 370-420c/kg, with most buyers sticking to a budget. 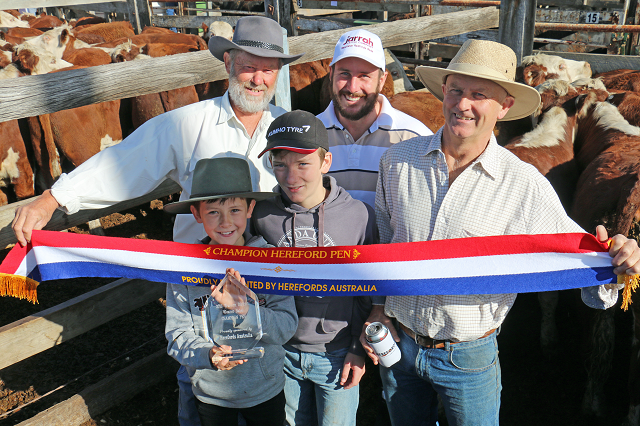 Bill and Geoff Lambert with Nicholas and Angus, Paschendale, and judge Kevin Stark at the 2016 Casterton weaner sale. Herefords Australia will once again sponsor the champion pens.